Getting stoned in the name of GOD 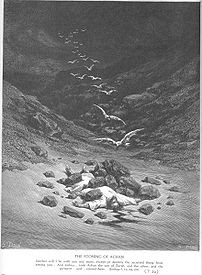 I've been visiting this site for a while now and I like it. It is actually good therapy to know one is not alone. Thanks to all who started and contribute to this site. And thanks to the fundys and Xtians for their ludicrous comments and vain attempt to battle "Satan"... you blokes are good for a laugh and re-enforcing why I will never return to such stupidity.

Anyway, have any of you noticed in religious films how the act of stoning seems to be quite low key? I've been led to believe (thanks to Hollywood) that the act of stoning used in the Bible and ordered by a loving GOD as a punishment for sin, was nothing more than the throwing of a few pebbles.

Nothing could be further from the truth. Let’s set the scene.

You are walking down the dusty path, thinking how wonderful and loving god is for giving you a lovely day, a good wife, and a couple of nice kids whom you love very much. Suddenly, two men grab you and take you to the chief priest (your god’s anointed) where you are thrown to the ground. A sea of glaring judgmental eyes pierces your soul, and your heart is thumping fiercely. You’ve seen this before and find it quite barbaric and cruel. You cannot run; no way out; the circle of your accusers is tight. You cannot fight; too many of them. So you pray, knowing the loving god will save you, and the growing horde of men will see reason and justice.


All under the banner of god, and all with god remaining completely silent on the issue. Two men (Deut 17:6) step forward and accuse you of wickedness. They are, in fact, lying. They don’t like you and stand to gain by “removing” you. Sure, they can suffer the same fate if they are caught, but they won’t be -- they are smart.
You plead your innocence, but before you finish the sentence, a flash of searing pain shoots from your leg and you see bone protrude from your thigh. Your heart is pounding. Adrenalin is surging through your body. You get up, ignoring the pai, and begin to hobble, only to have another large jaggered stone smash your other leg. You fall to the ground, but still the desire to live and see again those you love is strong.

You crawl in the dirt, and now the rain of horror begins.

Each stone is thrown with such religious fervour and bloodlust that it either breaks a bone or causes massive internal bleeding. Skin is flayed open by blunt force trauma. Parts of your body are left behind as you continue to struggle. The only thing left is your mind, as your arms used to protect your head are completely shattered and dangling. The stoning does not hurt anymore; your spinal cord is already broken. With the last sparks of your mind you remember the things that made you happy: your wife, your children, your youth. With darkness creeping over you, you know this is it. Why didn’t your god help you, and why did he encourage such a cruel punishment and death?

The confusing thing is the New Testament Bible never explicitly reversed the law of stoning. Jesus did not really stop the stoning of the “sinful” woman or object to stoning. He just played mind games and used a play on ideas with the pharisees, which he seems to take more interest in rather than using his supposed awesome power to completely outlaw the practice. Stonings would have happened during Jesus’s ministry; none were prevented. The bible makes no mention of it. Maybe it is not important. What’s important, according to the Bible, is whether you gaze too long at the hypnotic bounce of a woman’s breasts!

In fact, when Jesus makes the statement, “Let he without sin cast the first stone”, one could assume that if there were one without “sin” then Jesus would have stepped aside so one could really whack her good with a big and heavy stone.

Which leads to my bemusement of religious types’ fascination and lust for cruel and prolonged torture, always thinking up more creative ways to inflict the most horrific and evil pain/death on their victims.

All under the banner of god, and all with god remaining completely silent on the issue.

at Monday, January 05, 2009
Email ThisBlogThis!Share to TwitterShare to FacebookShare to Pinterest