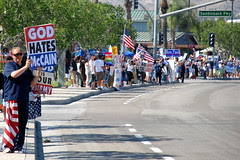 Rick Warren, author of The Purpose Driven Life and founder of one of the country's most successful mega-churches was chosen to give the invocation at the Obama inauguration for the same reason Sarah Palen was chosen as McCain's running mate: as a valentine to Evangelicals.

Warren represents the kinder, gentler side of Evangelicalism, what many people like to think of as the Evangelical mainstream. He belongs at some midpoint between Jim (God's Politics) Wallis on one hand, and Fred ("God Hates Fags") Phelps. Theologically, Warren has managed to steer clear of the worst excess of Prosperity Gospel - the God-wants-you-to-be-rich message that has made Joel Olsteen rich indeed. He acknowledges institutionalized injustice as a moral issue and thinks its OK for Christians to care about our planetary life support system. For those looking desperately for someone to embrace--for a way to build bridges between fundamentalists and the rest of us-- Rick Warren seems like a good bet.

But we should not forget what that Evangelical midpoint actually looks like beneath the warm, well-socialized persona. I won't go into blood atonement and biblical literalism here; let's just look at politics. In 2004 Warren sent out a missive to his faithful:

It's important for us to recognize that there can be multiple opinions among Bible-believing Christians when it comes to debatable issues such as the economy, social programs, social security, and the war in Iraq.

But for those of us who accept the Bible as God's Word and know that God has a unique, sovereign purpose for every life, I believe there are 5 issues that are non-negotiable. To me, they're not even debatable because God's Word is clear on these issues. In order to live a purpose-driven life - to affirm what God has clearly stated about his purpose for every person he creates - we must take a stand by finding out what the candidates believe about these five issues, and then vote accordingly.

Here are five questions to ask when considering who to vote for in this election:

Please, please do not forfeit your responsibility on these crucial issues!

Fascinating isn't it, that 2000 years ago, the Bible writers managed to issue unambiguous statements about stem-cells and cloning? And that despite over a thousand references to poverty and injustice, these are issues on which there can be multiple opinions among Bible believing Christians?

Crosby's questions happen to mirror two critical teachings of Jesus as portrayed by the Gospel writers: His answer when asked what is the greatest of all the commandments, and the reason He says that people will go to hell. Why aren’t they on Warren’s list?

We should not forget what that Evangelical midpoint actually looks like beneath the warm, well-socialized persona.Mainstream evangelicalism, as a form of theological fundamentalism is about certitude, about simple clarity. The role of the evangelical minister is to help his followers know without a shadow of a doubt what is real and how to live. It is about taking our complicated, fast-moving, sometimes scary world and distilling it into Four Spiritual Laws. If you look at Warren's list, what you will see is that they all have yes/no answers. To answer a yes/no question well can take a lifetime of thoughtful inquiry. But anyone, anyone when given a yes or no answer by a trusted authority figure can remember it, repeat it, and so relax.

at Tuesday, January 20, 2009
Email ThisBlogThis!Share to TwitterShare to FacebookShare to Pinterest