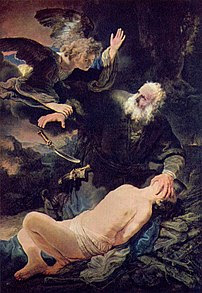 In the Bible we read how God tested Abraham by asking him to sacrifice Issac his son. Of course God stopped him, but that is beside the point. God actually asked one of HIS followers to kill his own son as a test of faithfulness. Sick, just plain sick. What is even sicker is that Abraham was willing to do it. This is the same God who supposedly ordered the genocide of races who practiced ritual human sacrifice.

Then we have the story of Job. God placed a bet and then allowed Job to be brought near death after losing his family, possessions, and even his health. All because God wanted to test another follower.

Daily, Christians suffer some fate or go through something terrible -- such as an unexpected death of a loved one -- and say that God is testing them. They even have pride in this! Hello! Red flag! What kind of God requires some kind of suffering as a test and then leaves you guessing as to what the test is for?

When in school, I knew the test was coming, what it was for, and what the outcome was when it was QUICKLY over. If I failed, I got to study and retake it.

Either God gets some sick pleasure from all this or is just so plain insecure that he constantly has to prove himself. How sad either way.

My take on it is this: There are no tests -- never were. Life just has its ups and downs. I don't need to cry out to God for help. Rather, I can logically look at the situation and see what went wrong. I can then find a reasonable resolution to the problem.

I think of all the Christians I know who still have lives that suck after all the years I have known them. If they just stopped asking God and just took action, they could change their lives forever and for the better. I did it! Christians seem so afraid of reason and logic and would rather throw faith onto someone they can't prove exists or even see.

If you are a Christian, I ask you to stop and really think over your life. Use reason and logic and skip faith. Take control of your life and make it what you really want it to be. Free yourself from the trap of faith and "God's will." You can still have a purpose and fulfilling life without God or Jesus. It is possible to get through the day without prayer.

Everything I believed was spoon fed to me from the pulpit.

"Who is the bigger fool, the fool or the one who follows him?" -- Ben Kanobi.

My purpose in life:

at Monday, October 20, 2008
Email ThisBlogThis!Share to TwitterShare to FacebookShare to Pinterest