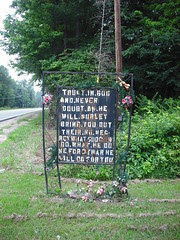 Ever notice that the Creator of the Universe always needs money -- money that is a monetary system created by man?

Ever notice that when one out of 100 is cured of cancer it's considered a miracle? What about the other 99?

Ever notice that Christians like to say “Christ is the Answer” followed by “No one can understand the Lord's ways?” So what's the point? Are we supposed to find the question?

Friends don't let friends convert to Christianity. Ever notice that those who reject God are “lost,” yet many Christians are still looking for God's Will?

Ever notice that Salvation is supposedly free, yet you are expected to tithe 10 percent of your GROSS income after being saved?

Ever notice that the amount of money, time and help you give to a church or religious organization is far more than it either ever give back?

Ever notice how churches preach about seeking the lost, but once you leave church no one comes knocking on your door?

Ever notice that many of the promises made by Jesus go unfulfilled? Maybe He's too busy carving His image into Cheetos?

Ever notice that even though Christians have access to the wisdom and knowledge of the Creator of the Universe, they still give canned generic answers to tough questions? Apparently, “God has his reasons” is an acceptable answer to why someone got abused as a child?

Ever notice that when someone makes a prophecy they claim to be filled with the holy Spirit, yet when the prophecy proves wrong or false they claim to be only human and made a mistake? But, still they expect you to still believe in their next prophecy!

Ever notice that when a prayer goes unanswered you are blamed for not having enough faith, even though answers to prayer are a way for God to prove himself? Jesus did it many times to prove who he was to doubters! Hmmmmmm.

Ever notice that in the Bible it says a Christian can't be harmed by poison, but if you ask a Christian to drink Drano they will refuse? They won't put their life in God's hands, but still they expect you to do it.

Ever notice that in the New Testament the characters Ananias and Sapphira were easily caught lying by the Apostle Peter because he was “filled with the holy ghost,” and yet many Christians today are deceived on a regular basis?

Ever notice that Christians preach love and compassion, but sing about war and conquest?

Ever notice that Christians look for the End Times, filled with death, destruction, and people burning in hell, and Atheists are considered evil for wanting none of that?

at Wednesday, November 18, 2009
Email ThisBlogThis!Share to TwitterShare to FacebookShare to Pinterest