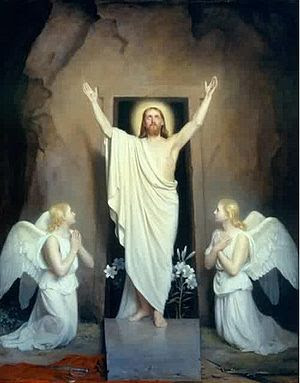 By Kris Komarnitsky, author of Doubting Jesus' Resurrection: What Happened in the Black Box?

(also available in the UK and as an ebook).

According to well-known proponent of Jesus’ resurrection Dr. N.T. Wright, “The empty tomb and the ‘meetings’ with Jesus, when combined, present us with not only a sufficient condition for the rise of early Christian belief, but also, it seems, a necessary one. Nothing else historians have been able to come up with has the power to explain the phenomena before us.”1 This view – which is really the idea that Jesus’ resurrection is the only plausible explanation for the Christian origins evidence before us – has been popularized by lay authors like JP Holding (The Impossible Faith

) and Lee Strobel: “I had seen defendants carted off to the death chamber on much less convincing proof!”2 It has also filtered down to the lay blogosphere: “The evidence is simply overwhelming. If you believe in gravity, you have to believe that Christianity is also true.”

But is it really true that there is no other plausible way to read the Christian origins evidence except to conclude that Jesus resurrected from the dead? Well, like most complex topics, that is probably a matter of personal opinion. Many non-believers dismiss Jesus’ resurrection out of hand based on the evidence that a God does not seem to intervene within human history in such a physically direct way. But what happens when non-believers engage people like those above? The answer is probably a lifetime of going back and forth on every single piece of Christian origins evidence without much progress. I do not know many people who would be interested in such a thing, but there is one particular piece of evidence that I found intriguing – the rise of early Christian belief referred to by Dr. Wright above.

Beginning my own inquiry into this topic several years ago, I took as my starting point the beliefs and traditions expressed in 1 Corinthians 15:3-7, widely recognized amongst scholars on both sides of the aisle to be the earliest known Christian beliefs and traditions, in existence well before any of the gospels were written:

In considering the possible causes of these beliefs and traditions, notice that Dr. Wright does not appeal to the historical reliability of the gospels. He is saying that even aside from the gospel accounts of a discovered empty tomb and “meetings” with Jesus, nothing else historians have been able to come up with has the power to explain early Christian belief. In other words, he is temporarily granting for the sake of argument the position of many in non-traditional scholarship that the gospels are mostly legends, including the discovered empty tomb tradition.

If the discovered empty tomb tradition is a legend, not only is Jesus’ resurrection effectively ruled out, but so are several non-traditional explanations for the rise of early Christian belief, like the stolen body theory, the moved body theory, and the theory that Jesus only appeared to be dead and then resuscitated. With these ruled out, there is only one explanation that jumps out at me as a plausible cause of the two-pronged belief that Jesus died for our sins and was raised. That cause is the human phenomenon of cognitive dissonance reduction. Basically, this is the human tendency to rationalize a discontinuity between reality and one’s current beliefs in such a way that current beliefs are modified or added to instead of being rejected. Sometimes this results in extremely radical rationalizations. We have solid examples of this from other religious movements in history, such as the Millerite movement, the Sabbatai Zevi movement, and others.

This theory has of course been proposed before and the controversy surrounding it can be seen in Dr. Wright’s strong disagreement with it, followed by Dr. Robert M. Price’s response to Wright’s critique. According to Wright, “The flaws in this argument [that cognitive dissonance caused early Christian belief] are so enormous that it is puzzling to find serious scholars still referring to it in deferential terms” (The Resurrection of the Son of God (Christian Origins and the Question of God, Vol. 3)

…there are many viable explanations [for the rise of the belief that Jesus resurrected], not least Festinger’s theory of cognitive dissonance reduction, whereby more than one disappointed sect has turned defeat into zeal by means of face-saving denial. Wright suicidally mentions this theory, only to dismiss it… with no serious attempt at refutation [emphasis added].

I agree with Price; Wright does not adequately rebut this idea.

If cognitive dissonance was the cause of these beliefs, the other traditions in 1 Cor 15:3-7 seem easily accounted for as part of a growing religious sect. A few individual hallucinations of the beloved leader would not be unusual, nor would a fringe legend of a simultaneous appearance to over 500 people (the latter seeming a reasonable conclusion given that this appearance tradition does not show up in any other literary source). If there was a need to designate leaders in the new movement – those who had the ability to teach, preach, and defend the group’s new beliefs – the traditions of the appearances to the Twelve and to all the apostles could simply be designations of authority. This would be consistent with the hierarchical structure in the two appearance traditions – Peter apparently being the leader of the group known as the Twelve (“he appeared to Peter, then to the twelve”), James apparently being the leader of the group known as all the apostles (“he appeared to James, then to all the apostles”). We know too that an appearance of Jesus was required in order to confer authority to someone in the early church, for Paul says, “Am I not an apostle? Have I not seen Jesus our Lord?” (1 Cor 9:1). This explanation for the group appearance traditions has of course also been suggested before. For example, Dr. Stephen Patterson says:

Both the Twelve and the church have everything to gain by the assertion that the risen Lord had also appeared to the Twelve. Including the Twelve in the appearance formulae probably derives from a decision on the part of the early church to expand the sphere of authority that was originally confined to the “pillars” to include the Twelve as well. It is not so likely that it derives from an actual experience of the risen Jesus….[This] could also be said about the claim in 1 Cor 15:7 that Jesus also appeared to “the apostles”… [We] have in this expression a second authority-bearing designation from earliest Christianity… The inclusion of “the apostles” in this formula… derives from an ecclesial decision to expand the sphere of authority beyond James to include others who could be trusted with the task of preaching. (God of Jesus: The Historical Jesus and the Search for Meaning

Lastly, there would naturally have been an immediate need, almost reflex, in a growing religious sect to ground their beliefs in sacred scriptures. The third-day belief could be a byproduct of this engagement with Jewish scriptures, with some likely scriptural candidates being Hos 6:2, a Jewish sacred third day tradition, and Ps 16:10 (this would be consistent with the creed’s assertion that Jesus was raised on the third day “in accordance with the scriptures”).

If this is how these beliefs and traditions came about, it makes sense that later legends would be built on them, like a discovered empty tomb on the third day after Jesus’ death and corporeal post mortem “meetings” with Jesus where people touch his body. Further, if the gospels are mostly legends, the frequent argument of Christians that the presence of Jesus’ corpse in the tomb would have doomed the new movement, fails. This argument fails because the burial account in the gospels could simply be an integral part of the discovered empty tomb legend (experts confirm the two traditions are tied together verbally and grammatically). The question to ask is, what normally would have happened to the body of a crucified criminal from the lower classes which was allowed to be removed from the cross in deference to Jewish burial sensitivities? The answer seems to be – a ground burial, probably in the Kidron or Hinnom valley, with nobody attending except for an indifferent burial crew who only cared to mark the site with whiting or a pile of loose rocks to give warning of uncleanness.

Doubting Jesus' Resurrection: What Happened in the Black Box?

begins at a place where believer, non-believer, and those who are not quite sure about Jesus' resurrection can meet - at the Bible's account of a discovered empty tomb three days after Jesus' death. Considering scholarship from both sides of the aisle, this book explains in clear and easily understood terms what many scholars have been saying for years - there is good reason to conclude that this tradition is a legend. If true, the historicity of Jesus' resurrection collapses. Following up on this possibility, this book turns its attention to a key bible passage (1 Corinthians 15:3-7) that is widely recognized to contain the earliest known Christian beliefs and traditions: Jesus "died for our sins...was raised on the third day...and appeared" to many people. Again drawing on a wide range of scholarly expertise and covering many topics often encountered in discussions about Jesus' resurrection, this book investigates and offers an answer to the question, what plausibly could have caused the rise of these extraordinary beliefs and traditions if there never was a discovered empty tomb?

Here is what just a few well-known scholars have had to say about Doubting Jesus' Resurrection: What Happened in the Black Box?

"Rare is it when a lay author puts in the effort of wide research, gathers the references to every point together, interacts with the leading disputes, and offers something soundly argued that hadn't been so well argued before. Komarnitsky does all of that and presents a surprisingly excellent demonstration of how belief in the resurrection of Jesus could plausibly have originated by natural means. Though I don't always agree with him, and some issues could be discussed at greater length, everything he argues is plausible, and his treatise as a whole is a must for anyone interested in the resurrection." – Richard Carrier, Ph.D. Ancient History

"If you liked my book Beyond Born Again, you're going to love this one by Kris Komarnitsky! He shows great acuity of judgment and clear-eyed perception of the issues. He does not claim to have proof of what happened at Christian origins, but he does present a powerfully plausible hypothesis for what might have happened, which is all you need to refute the fundamentalist claim that things can only have gone down their way. By now it is a mantra – it is also nonsense, and Kris shows that for a fact." – Robert M. Price, Ph.D. Theology, Ph.D. New Testament

"Komarnitsky is addressing an important topic in a considered and rational way. This book offers the open-minded reader an opportunity to work through some of the key questions surrounding the Easter mystery that lies at the heart of Christian faith." – Gregory C. Jenks, Ph.D. FaithFutures Foundation

"Clearly written and well argued, Doubting Jesus’ Resurrection lays out a plausible and intriguing case for a non-supernatural explanation of the New Testament resurrection accounts. Don’t be put off by the fact that Komarnitsky is not a scholar – his book makes a solid contribution to the historical-critical understanding of these immensely important texts. This book deserves serious attention from scholars and all those interested in Christian Origins." – Robert J. Miller, Professor of Religious Studies, Juniata College

at Monday, November 30, 2009
Email ThisBlogThis!Share to TwitterShare to FacebookShare to Pinterest