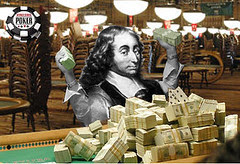 Pascal suggested a wager that boils down to this. Why not believe in god if it might benefit you, and at worst will do you no harm? Of course, we know it can do harm. Many have suffered for years and years over fears of hell for themselves or others. Also, most atheists and agnostics don’t really have a choice of believing. We cannot choose to believe in gods any more than we can choose to believe in fire-breathing dragons; all the evidence that we see points in the other direction.

I would like to propose a similar wager which I will call “Sage’s Wager.” In its briefest form, it asks the following. If you want to know how the world really works, why make a leap of faith to believe in a god when such leaps fail most (or all) of the time, and science so obviously works? Most Christians would agree that Christianity requires a “leap of faith” since there is no compelling, objective evidence for the existence of the Christian god. If there were, then way more than the current one-third of the world’s population would be believers. There have been a bit over100 billion homo sapiens who have ever lived on this earth[1], and perhaps ten percent were Christian. This means that roughly 90 billion people throughout history have believed in other gods. And yes, most “knew” in their hearts that they had found god. Can you be absolutely sure that your 10% got it right - and a whopping 90 billion got it wrong?

The scientific method has been proven to hone in on truth over time. Every piece of technology in our modern world proves this -- from the apple corer to the flush toilet, the radio to the computer, indoor plumbing to the kitchen stove... everything. True, science does not have all the answers, but that it works is as obvious as the buttons on your shirt and the zipper in your pants. Because of science, we no longer live in caves huddled in animal skins.

In contrast, faith as a method for discovering truth has always - or nearly always - failed at finding the truth. There have been thousands of false gods through history, all built on faith, no more than one real one, and perhaps none are real. Science says there are no miracles, only the inviolable laws of nature, while every god ever conceived (or revealed?) is dependent on miracles. Science succeeds over and over where faith has failed over and over. Do you really want to bet on faith? History shows that’s the long-shot bet, at best ten to one against. History’s ancient Egyptians, Greeks, Norsemen, Sumerians, Aztecs, American Indians, Incas, Persians, Chinese, etc., etc., believed in false gods. Then there are all the false gods of today in India, the Middle East, Southeast Asia, etc.; all false.

True, science is no help when it comes to questions of morality, but we don’t need science for that. We all learn the Golden Rule as children, and we need little else to answer most moral questions. Besides, the Bible is really no help on moral issues either. The Bible says we should execute homosexuals, disobedient sons, and people who work on Sundays. Virtually no Christian would agree with these directives, and none act on them. Christians ultimately decide on their own what is moral when they think the Bible is wrong, just like the rest of us. And why would you expect morality from Jesus anyway? This was a man who was quite all right with a plan to torture the majority of humanity for eternity (Matt. 22:13-14).

Are you afraid to trust your own reason? Would your creator fault you for using your legs to walk, or your eyes to see? No? Then why would he fault you for using your brain to reason through a question? Why would the creator of human intelligence want blind faith from people[2]? The bottom line is this; faith has failed miserably and consistently. The overwhelming majority of humans now and throughout history – at least 90% - have believed in false gods because they made a leap of faith and accepted miracles. You are surrounded by the successes of science, a method for learning how the world really works which denies miracles. Shouldn’t you consider the odds rationally? Human history proves decisively that your chances of believing in a real god are somewhere between slim and none, and likely much, much closer to the latter. I urge you to take Sage’s Wager, it’s never been proven wrong!
_________________________

[2] I wish this brilliant phrase were original, but I borrowed it from someone on this site and can’t remember the author. But thanks anyway – and sorry for forgetting.

at Thursday, November 12, 2009
Email ThisBlogThis!Share to TwitterShare to FacebookShare to Pinterest