Bibles to Baghdad – the Subtle Crusade and why it breaks American law. 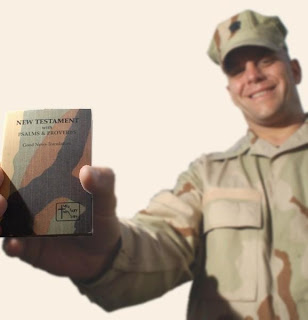 Religious groups have been exploiting the US Military Postal Service to flood Iraq and the surrounding region with bibles since shortly after the World Trade Center atrocity. These organized religious operations operate under the stated goal of sending bibles to the troops, but the results tend to imply another unstated goal, the creation of a “subtle” Crusade that witnesses to and attempts to convert Muslims in and around Iraq.

Before the invasion of Iraq one organization, Campus Crusade for Christ, through their Military Ministry set up a program that would allow anyone to send a solder something called a “Rapid Deployment Kit”. These kits each contain a New Testament Bible, a written 90-day prayer devotional, and a ‘how to’ booklet used to instruct solders in the methods of witnessing to others. In other words this is a ‘religious conversion kit’ designed to help Christians proselytize and it is meant to be given to new Christians to reinforce their conversion and assist them in witnessing to others.

Initially these kits were sent to soldiers wherever a solder or the family of a soldier requested. But the number of kits ‘deployed’ rapidly increased. To date, Campus Crusade for Christ boasts that over 1.8 million Rapid Deployment Kits have been sent to members of the US military. And while some of the Campus Crusade websites are vague about which countries these kits are being sent, other Campus Crusade websites strongly imply that they are all going to soldiers in Kuwait, Afghanistan and Iraq.

1.8 million pocket sized bibles – that’s over 257 thousand bibles a year. There are about 150 thousand American troops in Iraq, and another 30 thousand in Afghanistan and Kuwait. Many of these soldiers are on their third or fourth rotation, and most troops have been deployed to the Iraq multi-national force at least twice. 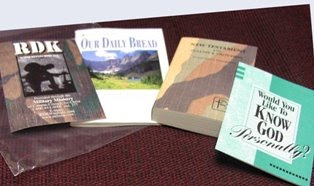 This means that new bibles are coming in every year to soldiers who are likely to have already received one of these bibles during their last tour of duty. If every soldier serving in Iraq, Kuwait and Afghanistan gladly accepted a brand new bible every year, there would still be a surplus of 77 thousand bibles per year.

This leads to the obvious question – where are all the extra “Rapid Deployment Kits” going?

Campus Crusade for Christ is not the only organization sending bibles to the Middle East through the US Military. Tim Todd Ministries, of Revival Fires fame, is sending bibles by the box to Iraq and Afghanistan. Tim Todd’s bibles seem to be designed to look like the standard Good News Translation Armed Forces Military Edition, but the cover is slightly different, and the bible contains, “… devotionals and study helps specifically for U.S. Military”. Another organization, the Open Window Foundation’s, “Operation Worship” set a goal to send a hundred thousand bibles to soldiers over a period of a hundred days.

Individuals, like Brad Blauser, have also sent bibles to Iraq. Blauser sent 550 Zondervan “Starting Point Study Bibles” in 2006, with a goal to send 6,000 bibles in 2007. I have no idea how many bibles he has sent since then.

Obviously Mr. Blauser’s operation isn’t of the same scale of Campus Crusade for Christ, but there are a lot of individuals like Mr. Blauser, and from speaking to my religious friends I’ve personally heard of two Fresno churches that are also sending bibles to Iraq. That’s an unscientific and statistically meaningless sample – but it is easy to assume that there are others doing the same thing. I’m guessing, but I would not be surprised to learn that half a million bibles and associated materials are being sent to US military members in Iraq and the surrounding area every year.

Campus Crusade for Christ, Tim Todd Ministries, Operation Worship, and Brad Blauser all have something other than bibles in common. They are all breaking Federal law, and they are encouraging military members to violate the Uniform Code of Military Justice – the laws to which all troops must abide.

The specific laws that they are breaking are the Federal Laws that provide for free or low-cost delivery of mail through the Military Postal System (MPS) – Title 39, Part 9, Chapter 3401 of Federal Code. This section details the way in which military members are allowed to post “free mail”. It also allows anyone located in the United States to post mail to military members serving overseas using domestic mail rates. Mail sent to APO / FPO addresses may be sent using standard postage – the mail is then collected at the APO or FPO and shipped using military transport to its final destination.

The Department of Defense Directive, Postal Manual DoD 4525.6-M (PDF) quotes Title 39 of the Federal Code as its authority to direct the actions of servicemen who work in Military Post Offices. This manual clearly states that military members are not allowed to receive mail as an “in care of” address for those who are not authorized to use the MPS.

Even non-profit, charitable efforts are not authorized. Recently the Stars and Stripes Newspaper wrote about Operation Care, a grass roots effort to distribute donations from Americans to needy people in Afghanistan. Organized by military volunteers in Bagram Afghanistan, Operation Care solicited donations that were delivered through the Military Postal Service and then distributed to Afghanis. While commendable, it was against both Federal and military regulations.

In 2006, Operation Care processed 16 tons of goods. When this organization’s practices were brought to the attention of the Military Postal Service, the MPS ordered them to stop. From the follow-up Stars and Stripes article:

"Although Operation Care is a noble cause, it is in direct violation of multiple DoD (Department of Defense) Policies listed in the DoD Postal Manual 4525.6-M," wrote Army Col. David Ernst, deputy director of the Military Postal System Agency in an e-mail addressed to members of the group and various civilian and military officials.

"I appreciate your cooperation in helping to end the illegal use of the MPS to operate a business and transport humanitarian items for distribution," he wrote. "Please direct them to seek an alternative means to conduct Operation Care."

The military is actually being very kind to those who volunteer for Operation Care. It would have been well within their rights to bring those responsible before courts-martial. Military members involved are guilty of violating articles 92 and 134 under the Uniform Code of Military Justice, and could be subject to anything from reduction in rank, to imprisonment plus forfeiture of rank and benefits.

It would be possible, but more difficult to prosecute those civilians in America who organized the donations for Operation Care.

All of the organizations detailed here deliver bibles exclusively through the Military Postal Service.

This leads to the second obvious question – why are Christians getting this ‘free pass’ to flout the law?

The military does not like to be embarrassed. Article 134 forbids embarrassing actions by forbidding, “all conduct of a nature to bring discredit upon the armed forces”. But maybe they just don't know what is going on?

At approximately a quarter-pound per Rapid Deployment Kit, it is difficult for the military to ignore that the MPS is shipping well over 30 tons of these kits each year. This number only accounts for the Campus Crusade for Christ’s shipments, the tonnage is likely doubled because other organizations use larger bibles that contain both the old and new testament. Operation Care’s mere 16 tons of delivered goods doesn’t come close in comparison.

Presumably the US military has noticed this drain on their resources. Operation Care was founded in 2006 and was noticed and warned in 2008. Campus Crusade for Christ’s effort has been ongoing since 2002, and they have received no equivalent warning. It is reasonable to assume that the US military is not embarrassed to assist with flooding bibles into to an Islamic country. This implies governmental approval of this subtle crusade.

And the supposition that "the troops need bibles" is somewhat faulty. Military chaplains may order bibles through the military supply system in order to give them to troops who ask for them. Although the supply system is slower than MPS, ordering bibles through it can be logistically planned for in advance.

So assuming that the US Military realizes that they are flooding Islamic areas with bibles, it could also be assumed that they approve of the practice. Perhaps I'm building a house of cards here, but the Christianization of the US armed forces has been well documented (link 1, link 2, link 3, link 4).

I am all for military members getting what they want and need. Every soldier who wants a bible, or the Torah, or Talmud, or Qu'ran or any other religious text should be able to have one. And if the military supply system can't get a religious text to a solder then kind donations through the Military Postal Service should certainly take up the slack.

But just how many bibles should each soldier receive? And just what do these Christian agencies expect soldiers to do with all those surplus bibles?


I have written three other, shorter entries on the ongoing effort to flood Iraq with bibles, which can be read here. I am currently preparing one more entry on the subject of sending bibles to Iraq, so keep checking back.
at Monday, July 28, 2008
Email ThisBlogThis!Share to TwitterShare to FacebookShare to Pinterest