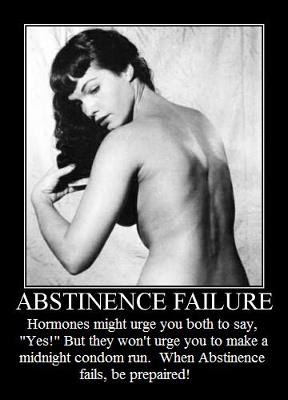 I have a long post today that was spurred by the article that Abstinence Only education doesn't work. How odd - religious conservatives keep saying that it DOES work - so I wanted to find out why they would say such a thing. I decided to see if my favorite religious fundamentalist lobbying organization could shed some light.

Tony Perkins, President of James Dobson’s Christian lobbying organization “Family Research Council”, is a big advocate of Abstinence Only education programs for teens and pre-teens in public schools. On 23 March ’07 he wrote on FRC.com:

In Adolescent and Family Health, Dr. Robert Lerner's analysis of urban D.C. participants found that, "Despite the fact that [these students come from schools that]... are located in Wards that have higher rates of out-of-wedlock births, girls who attended the program are substantially less likely to...have sex than a comparable sample... The relative odds of 120 to 1 of a [high school] Diamond Girl abstaining from sex is a result so strong that it is unheard of in practically any empirical research."

“Stacks of peer-reviewed research” validate Abstinence Only education according to Mr. Perkins. This is the opposite of what is reported in March 8th’s edition of CitizenLink.com, a news publication of James Dobson’s “Focus on the Family”. This edition of CitizenLink quotes Linda Klepacki, R.N., M.P.H., who is an analyst for sexual health at Focus on the Family Action:

What they are saying is that, in order to be medically and scientifically accurate, you must be verified and supported in your research by peer review," she said. "Abstinence education cannot get into peer-review journals because the journals are controlled by far-left liberal organizations that do not allow us to publish. That automatically eliminates abstinence-only education, from their standpoint.

How odd. Is it just me, or does it seem like Dobson’s left hand doesn’t know what the right hand is doing? Are there really stacks of peer-review proof that Abstinence Only education really works, or are all the evil secular progressives using their Black Helicopters to prevent the overwhelming evidence from being reviewed in Lancet or Science?

And what about the peer-review journal, Adolescent and Family Health? I decided to do a little research on the AFH journal. It would seem to me that a good way to make sure that a peer-reviewed journal is unbiased is to check on who runs it, who supports it, and how long the journal has been in business. So I started with the AFH ethics policy which states that:

A conflict of interest may arise when an individual, organization, or other entity has the opportunity to benefit either by monetary gain, employment, or policy position, from an article published through the Journal.

There is no mention of conflicts of interest due to religious idealism. This journal doesn’t seem to care that research may be accepted or rejected due to purely religious preconceptions.

The Editor in Chief of the AFH journal is Doctor Alma L. Golden. In order to hold this position Dr. Golden should have no political bias or scientific preconceptions so that she may evaluate all research with an open mind. Unfortunately Dr. Golden has a history of bias and preconception. Dr. Golden developed a taste for politics as an advocate for children’s health insurance in Texas. She then became a founder of the abstinence advocacy group, S.A.G.E. Advice. As the medical director and presenter of S.A.G.E. Advice, Dr. Golden not only advocated Abstinence Only, but also discouraged teaching the use of condoms. (Powerpoint link to S.A.G.E. presentation by Dr. Golden.)

Dr. Golden [will oversee] the Office of Population Affairs (OPA) within [the U.S. Department of Health and Human Services] Office of Public Health and Science. OPA advises the Secretary and Assistant Secretary for Health on a wide range of reproductive health topics, including adolescent pregnancy, family planning and other population issues. OPA also provides policy and administrative direction for the Title X Family Planning Program and the Title XX Adolescent Family Life Program.

Is this a conflict of interest? Louise Witt, in an article in the April 14th edition of Salon points out the conflict of allowing an Abstinence Only advocate to oversee the OPA:

The Office of Population Affairs oversees Title X, which provides federal funds for family planning and reproductive health services, and Title XX, which funds research and projects on teens' sexual issues. In Bush's 2003 fiscal budget, the administration requested a 33 percent increase, or a total of $135 million, for the office's community-based abstinence-until-marriage programs. As one lobbyist for a women's health group put it: "It's the fox guarding the chicken coop."

Well, the person who runs the journal of Adolescent and Family Health certainly seems biased to me. How about the people who support it? According to their website, AFH is a journal for the Institute for Youth Development (IYD), which was founded by Shepherd Smith and his wife Anita. Mr. Smith testified before the House of Representatives in March of 2003 in order to advocate Faith-Based Abstinence Only education and to discourage the promotion of condoms.

According to the IYD overview:

Since its inception, the Institute for Youth Development has been dedicated to ensuring the best possible future for America’s youth through the promotion of a risk avoidance message regarding five unhealthy risk behaviors: drugs, alcohol, sex, violence and tobacco.

“Risk avoidance” seems to be another way of saying “abstinence” to me. And the IYD agrees on its FAQ page:

IYD supports a comprehensive approach to sexual abstinence. In fact, we believe that the abstinence approach should apply to all risk behaviors associated with the use of alcohol, drugs, tobacco and violence.

The IYD FAQ page even has a blurb on the effectiveness of Abstinence education:

IYD believes that abstinence is indeed an effective approach to addressing adolescent sexuality. This message is being embraced by teens throughout the nation as evidenced by the 2001 Centers for Disease Control Youth Surveillance Survey. This survey indicated that 54% of teens have not had sex as compared to 45% in 1990. So, the survey indicates that teens are choosing to abstain from sexual activity. This year, the CDC reported that birth rates for unmarried teenagers continued to decline. Teens that choose abstinence are totally protected from the consequences that can dramatically alter their lives and their futures.

This blurb is very misleading. The IYD is quoting from the CDC’s “Morbidity and Mortality Weekly Report” a survey of trends in America. The survey they quote from is the “Youth Risk Behavior Surveillance” survey. By comparing two of these surveys the IYD notices that sexual activity among adolescents declined, which resulted in fewer births. There is no indication of why there was a reduction of sexual activity – but Abstinence Only advocates are quick to take credit for it, and the IYD quotes it as an “effective approach.” This seems circular to me.

The people who run the journal, Adolescent and Family Health seem biased to me, as does the organization that supports it. So how long has the journal been in business? The journal’s welcome letter is dated January 2nd, 2001 and is published twice a year. After 2003 publishing of the journal becomes erratic. The last dated issue was in 2005. There is one undated issue after that. You can see the issues here, but you'll need a free registration to read their abstracts.

So what about the “Stacks of peer-reviewed research” that Tony Perkins writes about? Well, there seems to be only one. In Volume 3, Number 4 of the AFH journal, a submission by Dr. Robert Lerner is titled, “Can Abstinence Work? An Analysis of the Best Friends Program.” The full text of this particular article can be read under a free registration, even thought the other articles must be read under a paid subscription. How odd - this feels like a magician's force to me.

I’m not a statistician, nor am I a psychologist or medical doctor. I am somewhat familiar with peer-reviewed articles and basic laboratory procedures. So perhaps I’m being arrogant when I say that this submission reeks of poor science. Perhaps someone could check me on this.

A good way to judge that the results are sound is to examine the methodology, here is what I've found. The Best Friends program for girls was founded in 1987 and runs in over a hundred schools across the USA. Instead of analyzing the program in all of these schools, Dr. Lerner restricts his analysis to those in Washington DC only. Dr. Lerner doesn’t randomly pick test subjects and control subjects, instead he picks schools that have more or less comprehensive data. The Best Friends program requires students to fill out data sheets at the beginning of the program and the end of the year. Dr. Lerner compares this data to the state’s Youth Risk Behavior Surveys (YRBS) for the District of Columbia; this seems to be his control group’s data. Dr. Lerner never indicates how many students are in his study at any point. The Best Friends program data is self-reported by the students, there is no discussion about adjusting that data for reporting bias, and there was never even the thought of an attempt to gather original, neutral data for the purpose of analysis.

The amount of dishonesty here should be astonishing, if it were not so common among religious conservatives.
at Tuesday, July 29, 2008
Email ThisBlogThis!Share to TwitterShare to FacebookShare to Pinterest