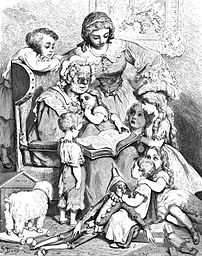 The Bible is a collection of fairy tales. To some of us this is as obvious as the noses on our faces. In fact, to me it is one of the most amazing, mind boggling things about this world that millions of adults simply cannot see this obvious truth. True, the Bible begins with “In the beginning…” rather than “Once upon a time…” but not all fairy tales begin with those words, and the other parallels are just too striking to ignore.

Here is a definition from the WEB.
Fairy Tale:

1. A fanciful tale of legendary deeds and creatures, usually intended for children.
2. A fictitious, highly fanciful story or explanation.

“A fanciful tale of legendary deeds and creatures?” How about the creation of the universe in 7 days (whoops…the ‘all powerful’ creator rested on the 7th day – so call it 6)? How about a man walking on water and making food fall from the sky? How about a man curing illnesses and banishing ‘evil spirits’ with the wave of a hand? How about making a staff turn into a snake? How about an invisible superhero causing plagues of locusts and other such vermin? Oh, and legendary creatures? Well how about witches, wizards, sorcerers, spirits, satyrs, demons, giants, ghosts, dragons, and unicorns? Yep, they’re all in there.

Amazing! It's simply amazing that so many people really believe this crap! And you want “fictitious, highly fanciful stories or explanations?” How about a flood that covered the whole earth to the highest mountaintop, killing all creatures which hadn’t been herded onto a single boat? How about a man with super strength which resided in his hair? How about a boy slaying a giant with a slingshot? How about a man hanging out in the belly of a giant fish for 3 days? How about 900-year old men and talking jackasses and bushes? How about a woman being convinced by a talking snake to eat the fruit of a magical tree? Yep, they’re all in there, too.

Please note that definition number one says, “…usually intended for children.” Therein resides the problem. If children were not exposed to adults insisting year after year that these ancient fairy tales are true, who would believe in them? These stories are all scientifically impossible and are so far fetched that only ignorant, primitive desert tribesmen, uneducated children, and the thoroughly brainwashed could take them seriously.

Clearly the Bible is merely a collection of fairy tales and should be catalogued and shelved with the fiction section of the library. But not with the other fairy tales, because so many of the Bible’s stories are too disgusting to be read by children (Abraham being ordered to kill his son, Lot lying with his daughters, etc.).

Amazing! It's simply amazing that so many people really believe this crap!

at Monday, March 09, 2009
Email ThisBlogThis!Share to TwitterShare to FacebookShare to Pinterest

How could you write such a commentary, besides the country in which we abide is formed for those to speak freely and you are entitled to your opinion, and yes it is merely an opinion, I am surprised you had the gall to write such.....ok a religion and following a multitude of people (demonations) can truly fail you...one PERSON that can never fail is Jesus.....the Trinity, God the Father, The Son and the Holy Ghost!

You are delusional, but hey, thanks for reminding us all how glad we are that we escaped from christinsanity. Now, please read the site disclaimer and GO AWAY.

i totally agree with this if you read it.its really a collection of fairy tales based from barbaric era...i was raised as a christian si(nce i was born in a catholic country(which you wouldnt be given a choice but to believe)

but i was contended to what its say.(make me wonder how people believe that and accept it without questioning it.)