A quickly stated case against the Resurrection 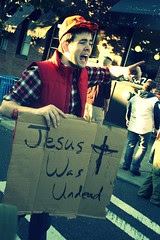 This is just way too easy...

1) The stories (Gospels) recounting the ‘facts’ of the Resurrection were not written by Jesus himself; they were not first-person accounts.

2) The writers of the stories were not eye witnesses, and never claimed to be. The stories are, at best, second hand, and may well be third- fourth- fifth-, etc. hand.

3) The stories were written at least 35 years after the fact. Consider how a story can change over such a span of time. Scientists have proven that we all rewrite our memories, to some extent, every time we recall them. And if the story was retold from person to person on the way to the writers, so much the worse; remember the telephone game we all played as school kids?

4) The stories conflict one another on many different issues; for just one example, according to the Bible, who went to Christ’s tomb on the day of the Resurrection? Each Gospel provides a different list of people.

6) The stories were not intended to be unbiased reporting, but were designed with the expressed purpose to convince the reader:

30And many other signs truly did Jesus in the presence of his disciples, which are not written in this book: 31But these are written, that ye might believe that Jesus is the Christ, the Son of God; and that believing ye might have life through his name.

In sum, the case for the Resurrection is preposterously, ridiculously weak, but without it Christianity collapses. No court in the developed world would accept conflicting, hearsay testimony of this sort in a real trial. Such is the foundational basis of Christianity.

at Wednesday, March 04, 2009
Email ThisBlogThis!Share to TwitterShare to FacebookShare to Pinterest