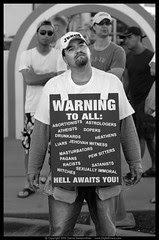 The title for this article is a quote from Holly Near’s song “I Ain’t Afraid” (http://hollynear.com/lyrics/i.aint.afraid.html), and I write this rant in the same fashion as her song, because I am not afraid of anyone’s god, but rather what they do in the name of their so-called deity. This behavior keeps me in the closet with my disbelief here in the Bible Belt, because I have been through such vicious and disgusting behaviors before, which I have no desire to experience again. I only hope that one day such behaviors will end and it will not matter if one is a humanist, non-theist, atheist, agnostic, or whatever label they chose for themselves.

This past week, Acharya S. was on this so-called Catholic bishop’s podcast. I do not know if his name is necessary, but he appears to be of the First Vatican deal. Those who are former Catholics know what I am trying to refer to and he believes in the paranormal and exorcisms. Not the best set up for a mythist on an Internet radio show, in my opinion, but Acharya appeared on his show via phone anyway and worst fears for her on his show eventually happened. (Audio here, if you feel the need to listen to his vicious rant: http://video.google.co.uk/videoplay?docid=-7067424531170940883 )

Acharya S. ( http://www.truthbeknown.com ), AKA D. M. Murdock, is a very intelligent woman, who has written four books- “Christ Conspiracy: The Greatest Story Ever Sold”, “Suns of God”, “Who Was Jesus? Fingerprints of the Christ”, and her latest book “Christ In Egypt”. She was also part of Zeitgeist (part I) and wrote a companion guide to the first part. She had nothing to do with parts II and III. We have corresponded via email, her groups, and I am not ashamed to say that I moderate her forum at “Truth Be Known”. While we may have disagreed a time or two, I do not have a harsh word to say about her and think highly of her and her work.

Anyway, the interviewed played out with the so-called bishop eventually, getting abusively irate and hanging up on her, as he continued cussing, cursing, threatening, as well as butchering her title, which means “teacher”. It was deplorable how he treated her verbally and as a Humanist, I object strongly. I cannot respect or even listen to anyone who treats a person so inhumanly. I can name the number of bishops and priest, all Anglican/Episcopalian, on one hand plus two fingers, that I do respect and this man is not one of them, irrespective of him being Catholic. To Bishop Spong and Father Tom Harpur’s credit, I truly believe Acharya would have been better off if she had talked to one of them on some podcast concerning her book “Christ in Egypt”.

Sure, this man was amicable for the first forty-five to fifty minutes. Then he starts to explode on her, takes offense to what she had to say, hangs up on her shortly afterwards (abut the 54 minute mark), and goes on a Holy Horrors tirade that is typical of devote believers, as well as a side rant that had nothing to do with her. He is completely abusive and degrading.

Such behaviour, when it happens to me, frightens me and I end up protecting myself with bashful lies concerning what I believe, in an effort to appease the one accosting me. If anything is absurd, it is taking offense to what a person says about a religious text or religion, especially if it is not directed towards said person, and then to suggest people should do violence to others for having such beliefs that differ from yours is just plain WRONG. His behavior was just plain childish, especially with him purposely butchering her title, yet it turned frightening and appalling before it was finished.

As a humanist and a person who left the church over six years ago, why do I care? Because what he did to Acharya is what I fear most by making public that I am humanist, a non-theist. Such things can get even worse than some weirdo Rush Lumbar, who cares how you spell it, like person spouting off on airwaves that said person should have their “ass kicked” for admitting the truth about religion. This man is a prime example of how human beings make earth hell. Earth can be heaven, by this man’s indirect admission, only if you accept and at least give lip service to his religious beliefs.

Not only that, who is it really who hears only what they want to hear? Apparently, this man does and he goes bat-shit crazy when someone disagrees with him. He is the one using the media to make his childish, dehumanizing, and violent point. This is what I find frightening, especially when it is followed with threats or the suggestion of violence. Acharya did not commit hubris either, so his statements are completely meaningless and out of line. Not once did she say anything or anyone was better than his silly deity is. Therefore, his reaction, in my opinion, was totally unwarranted and apparently wanted to find a means to rant about other people’s opinions.

I am not afraid of going to hell because I do not believe in this bishop’s god or even my Evangelical mother’s god or anyone else’s deity. I do not believe there is a hell or a heaven, except for what people make this earth. I am not afraid of any consequences for not believing the Apostle’s Creed or the Bible as inerrant truth. What I am afraid of is other people’s behaviors and would sooner be a cat that runs and hides somewhere to avoid harm.

In my opinion, this man set her up so he could rant about her statements and degrade her for her personal beliefs. This was one of many set-ups for many Christians who ask someone if they believe in God, in particularly their god. If you say yes, it had better be their concept of a deity. If you say no, then you had better watch out because it is then they spew abusive vulgar vile and venom and, like this ignorant bishop, vehemently insist they are right and you are absolutely and completely, without a doubt, wrong, as they tell you “don’t screw with the facts”.

What facts? Christianity does not have a corner on facts and I do not wish to have a conversation with such people either. IF anyone’s mind is twisted, it is those who are so delusional that they believe they are right and everyone else is wrong. The delusional people are the ones who twist the facts to suit themselves when it concerns religion and then spew hatred towards those who do not accept their religious beliefs. That is the vary basis of dogmatic beliefs and I find dogma deplorable.

Acharya has guts. More guts than I have, because when I was asked by a Pentecostal faith-head with a look that was an angry “are you sick?” look, “You do believe in God?”, I get scared of the person and shrink back into a shy hole, while giving them silent lip service via a passive nod to avoid such repulsive vulgarity. I am repulsed long before they have a chance to begin their vulgar verbal abuse, only because I have seen it too many times.

As a side note, vulgar means common, thus where we get the word “Vulgate”, which was written for “the common people”. So not only are such people offensive, they are common with their reactions to those who do not agree with them religiously. Thus, is my use of the word vulgar in this context, for it is not only offensive, but also common.

I do not fear any fictitious hell nor do I even conceive of such a place as described in any religious text. What I do fear is what people do in the name of their god and to me that is hell, created by humans, on earth. Afterwards, especially if it was just a question, I kick myself, every time I react in such a manner, for not daring to be honest with them and taking the horror they could impose on me, either verbally or physically. Both are just as bad and I cannot tolerate such behavior when it happens. If one wants my respect, then they need to show respect to those who do not believe as they do.

The only time one should say anything is when they see such abuses and lack of human dignity from others. This bishop was abusive and denied a form of human dignity to Acharya in the name of his fictitious deity.

However, I am sad to say, it is people, such as this bishop, who scare me and cause me to crawl into the closet. I am not afraid of their god, so-called holy texts, places of worship, their concept of a hell, or any of their other human concepts and creations. I am afraid of what they do in the name of their god and I not only deplore such behavior, but I abhor it. In addition, I fear people like this and wish that such bullies would grow up, even if they chose not to believe their beliefs are nothing but rewritten mythology. All such behavior leads to is another form of a Crusade or Jihad, in my honest opinion, which in turns leads to their REAL god, a nuclear weapon. It is such delusional assertions that lead me to say, “In the end, the only god that will descend from the sky is a NUKE!” It will not be the fictitious Yahweh, Jesus, or Ah-yah.

In my opinion, this man debunked nothing. All he did was act like a child and spew hatred, anger, and suggested violence towards a woman and anyone else who does not agree with his religious views, thus reinforcing my fear of others. This man does not deserve my respect and he does not receive it either. The same goes for anyone else who acts like him or worse, and sadly, I find such behaviors quite typical of austere believers.

No one who behaves such as this man did will get to know me for who I really am either. Instead, what they will get is rants about their behavior, because it is deplorable and unacceptable. I cannot tolerate such abusive and hateful behaviors nor will I allow them to treat my family, friends, or me in such a manner either.

Such people is what caused me to work very hard in sheltering my sons from Evangelicalism in the heart of the Bible Belt when they were little. Neither of them was exposed to such religious extremism until they were in the mid-teens and both of them also reject such extremism with a passion.

I do not fear any fictitious hell nor do I even conceive of such a place as described in any religious text. What I do fear is what people do in the name of their god and to me that is hell, created by humans, on earth.

at Sunday, March 15, 2009
Email ThisBlogThis!Share to TwitterShare to FacebookShare to Pinterest