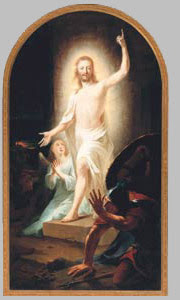 The Christian Bible culminates in a death and resurrection story. What is this story, and where did it come from? In this post, Valerie Tarico, author of The Dark Side, interviews Dr. Tony Nugent, scholar of world religions and mythology. Dr. Nugent is a symbologist, an expert in ancient symbols. He taught at Seattle University for fifteen years in the Department of Theology and Religious Studies and is a Presbyterian minister. This interview was first published in 2008.

Easter is coming. Some people are saying that the crucifixion and resurrection narratives simply retell the cycle of seasons, the death and return of the Sun. Others say that these stories are literal histories. But you say the reality is more complicated than either of these. You argue that the Easter stories - the death and resurrection of Jesus have very specific mythic origins.

I view the story of Christ in the Gospels of the New Testament as a powerful and spiritually wise sacred story. While the story is told as if it happened, it is a theologically and mythically constructed history. The conclusion of the story, the account of Christ's crucifixion, resurrection and ascension to heaven, has many layers. But at its core I would say it is an historicized version of a very ancient myth from Mesopotamia, the Cradle of Civilization, the land we today call Iraq.

What does that mean?
Some stories speak to people in a deep spiritual way. These sacred stories are what are called "myths" in the field of religious studies. Despite our common usage, a myth traditionally is not just a false tale. Rather, it is a story that, at least at one point in time, had a very powerful spiritual resonance. The story of death and resurrection is one such story. In the Sumerian tradition, in which much of the Bible is rooted, the story is called, "From the Great Above to the Great Below" or "The Descent of Inanna." There is also a Babylonian version of the myth, which is called "The Descent of Ishtar," and she is known elsewhere as Astarte.

Let's hear the story!
The Sumerian goddess Inanna is the personification of the planet Venus the "Queen of Heaven" and a major deity in the Sumerian pantheon. A long, long time ago, before humans are even created, Inanna, takes a journey to the Underworld, a realm under the control of her sister Ereshkigal. Before heading out Inanna gives instructions to her assistant about rescuing her if she runs into trouble, which she does. In the underworld, she enters through seven gates, and her worldly attire is removed. "Naked and bowed low" she is judged, killed, and then hung on display.

I can't help but notice that the number seven is a sacred, just like it will be later in the Bible.
Yes, the numbers three, seven, twelve are sacred throughout ancient Mesopotamian writings including the Hebrew Bible (seven days of creation, twelve tribes of Israel) and subsequently Christianity (three days in the tomb, twelve apostles, twelve days of Christmas). They have their roots in universal human perceptions of the movements of the heavens (e.g. twelve signs of the zodiac).

To return to the story, the result of Inanna's death is that the earth becomes sterile. Plants start drying up, and animals cease having sexual relations. Unless something is done all life on earth will end. After Inanna has been missing for three days her assistant goes to other gods for help. Finally one of them Enki, creates two creatures who carry the plant of life and water of life down to the Underworld, sprinkling them on Inanna and resurrecting her. She then prepares to return to the upper realm.

So Inanna is the prototype for Jesus in the Easter story?
Not quite. She is part of the prototype. After Inanna gets out of the underworld we are introduced to her husband Dumuzi. When mythic stories get passed from one culture to the next, sometimes one character can split into two or two characters come together. In this case, the Jesus of the resurrection story blends parts of Inanna and Dimuzi.

Ok, let's hear about Dumuzi.
The Underworld has a number of names, including "the Great Earth" and "the Great City", and it is also called the "Land of No Return." If, by extraordinary chance, someone is resurrected or escapes from there, a substitute must be provided. So when Inanna returns to the upper realm she searches for a substitute. She doesn't want to send anyone who has been missing her and mourning her down there, but she finds her husband Dumuzi on his throne and totally unconcerned about her being gone. She decides that he will be her substitute.

He protests vigorously and is helped to escape by his brother-in-law Utu, the Sun-god. But then a compromise is agreed upon, whereby Dumuzi will spend six months of every year in the Underworld, and for the other six months his devoted sister will substitute for him. Life and fertility thus return to the earth. And that's how the story ends.

Six months up and six down. Now I am reminded of Persephone.
Yes, and many other dying and rising gods that represent the cycle of the seasons and the stars. In Christianity one way the story changes is that it is detached from this agricultural cycle. The dying happens just once.

But this story of Inanna/Ishtar is the oldest, the prototype?
It is one of the earliest epic myths recorded. We know this story because it has been found inscribed on cuneiform clay tablets dug up from the sands of Iraq by archaeologists, and because linguists have deciphered the Sumerian language and provided translations in English. This was a popular myth, and so we have multiple copies of it, or of portions of it. The earliest tablets inscribed with this story date to the beginning of the 2nd millennium BC, and it is thought to have been originally formulated about 2100 BC, i.e., 4200 years ago.

Lay it out for us. How do you see this being a prototype for the story of Christ's death and resurrection?
Let's start with the first part of the myth. Inanna and Jesus both travel to a big city, where they are arrested by soldiers, put on trial, convicted, sentenced to death, stripped of their clothes, tortured, hung up on a stake, and die. And then, after 3 days, they are resurrected from the dead. Now there are, to be sure, a number of significant differences between the stories. For one thing, one story is about a goddess and the other is about a divine man. But this is a specific pattern, a mythic template. When you are dealing with the question of whether these things actually happened, you have to deal with the fact that there is a mythic template here. It doesn't necessarily mean that there wasn't a real person, Jesus, who was crucified, but rather that, if there was, the story about it is structured and embellished in accordance with a pattern that was very ancient and widespread.

So what about the 2nd part of the myth?
The 2nd part of the Inanna myth really focuses on her husband Dumuzi. Dumuzi is the prototype of the non-aggressive, non-heroic male; he cries easily; he is the opposite of the warrior-god in the ancient pantheon. The summer month which corresponds to our month of July is named after him in both the Babylonian and Hebrew calendars, and during this month each year his followers, mostly women, mourn his death. From this myth we are talking about, and from a few other references, we also know that he is resurrected. But unlike Jesus, who dies and is resurrected once, he is imagined to die and be resurrected over and over, each year. There are other major differences. However, there really are a lot of similarities between the personalities and the stories of Jesus and Dumuzi. They both are tortured and die violent deaths after being betrayed by a close friend, who accepts a bribe from his enemies. They both have a father who is a god and a mother who is human. Dumuzi's father, the god Enki, also has many similarities to Yahweh, the father of Jesus.

Other than this gospel story, are there any other signs of Inanna's influence on Christianity or on Easter?
There are a few points I would mention. Inanna becomes known outside of Mesopotamia by her Babylonian name, "Ishtar". She is a personification of Venus as an evening star, and there is also a male aspect of the deity who is usually the morning star. At the end of the Book of Revelation when Christ speaks to John he says, "I am the bright morning star." In ancient Canaan Ishtar is known as Astarte, and her counterparts in the Greek and Roman pantheons are known as Aphrodite and Venus. In the 4th Century, when Christians got around to identifying the exact site in Jerusalem where the empty tomb of Jesus had been located, they selected the spot where a temple of Aphrodite (Astarte/Ishtar/Inanna) stood. So they tore it down and built the Church of the Holy Sepulchre, the holiest church in the Christian world.

Also, our holiday of Easter was traditionally called 'Pascha', and still is in many languages, named after the Jewish festival of 'Pesach' or Passover. In the Germanic and Anglo-Saxon world we have, however, come to name the holiday 'Easter'. This name is almost surely a reflex of the goddess Ishtar. In the pagan spiritual traditions of Germany and England in the medieval period Ishtar, who came to be called the goddess Easter, and who as a deity of resurrection and rebirth became strongly associated with the season of springtime and ultimately gave her name to Christianity's main holy day.

No rudeness intended, but how can you call yourself a Christian? Mark Driscoll, rising Evangelical star, told his Seattle congregation: "If the resurrection of Christ didn't literally happen, there is no reason for us to be here."
Well, many Christian theologians see the crucifixion and resurrection as a spiritual story rather than a literal one--a story about hope beyond despair, redemption and new life. But they are not the ones who get the media attention. I consider myself to be a Christian in a spiritual sense, not in a doctrinal sense. This means my Christianity is defined by values, spiritual practices, and faith rather than belief in a specific set of doctrinal agreements. Before the 4th Century, when orthodoxy was established, Christianity was characterized by heterodoxy -- many different forms of belief.

If the resurrection of Christ didn't literally happen, that shouldn't have any bearing on whether life now is worth living or how we should live. From my vantage point, where values and practices are the heart of Christianity, the contradiction lies in people like our recent president who think it's ok to practice torture and yet call themselves Christians. Who would Jesus waterboard? Christ's torture and execution remind us that we are called to put an end to such practices in human affairs. From the standpoint of my Christianity, right-wing evangelical fundamentalism is really the opposite of what Christ was about. Those who subscribe to an intolerant, arrogant, inhumane form of Christianity are following a religion that is literally antichrist.

at Saturday, April 11, 2009
Email ThisBlogThis!Share to TwitterShare to FacebookShare to Pinterest