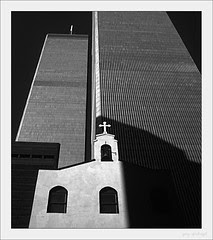 Wikipedia defines Faith as a belief in the truth of or trustworthiness of a person, idea, or thing, that is characteristically held without proof.[1] [2] Informal usage of the word "faith" can be quite broad, and may be used standardly in place of "trust", "belief", or "hope".

For example, the word "faith" can refer to a religion itself or to religion in general, where in this context faith would encompass not only a belief without evidence but also a belief which can oppose scientific evidence. As with "trust", faith involves a concept of future events or outcomes.

Faith is quite literally the belief in that which is not seen, known or realized.
The architects of all the monumental achievements of humankind both good and bad, structural and social have all been a tangible result of the creations of the mind.

Those who built the Pyramids, Colosseum , Democracy, Auschowitz, the nuclear bomb, and many other great and dreadful things first had to envision that which did not exist and believe and pursue that vision until it manifested in reality.

I believe the power of faith is best demonstrated in the extreme opposite examples of Hitler and Gandhi. Both used the same tool and formula and power that lies in all of us to change the ENTIRE world!

Both of these leaders defined a vision and those who followed them shaped their individual belief structures to accept a reality they could not see and achieve and do things that their minds would rationalize in many diverse ways. This is the duality of the power of faith which is a tangible unbiased force and different from religion which is an institution with a pre-structured set of beliefs built in.

Religion is dangerous because like so many things it is a double edged sword and because it is the dominant force in almost every culture on the planet it can propel or stunt and even possibly end the future growth of humankind.

The very belief that your life is preordained by some deity or force with a master plan and that we have no control over the events that exist in this life is a disabling belief. By thinking this it becomes your reality.Literally many cultures on earth are both consciously and sub-consciously steering the ships of state with this belief.

Governments with nuclear weapons and massive armies and untold global impact are leading their countries with a common belief in some version of doomsday or Armageddon that could become self fulfilling for all religions and humankind as well.


Religion is wrong because it lets those who don't have all the answers believe that they do. The ancient coping mechanism that created thunder gods to explain the sheer terror of lightning to the Neanderthal is now limiting our scientific and social advancement.

In order for the human race to evolve we MUST learn to put our power of faith into a common purpose and to be as blunt as the English language will allow Religion is screwing that up. The built in failsafe mechanisms of almost all religions do not allow for dissent without eternal and temporal consequences which are to many to list.

Overcoming the limitations of religion is the most important of all humankind's future challenges.

Maybe by sharing some of the above observations openly with all who would listen we could help even those who choose to hold on to their religion to at least abandon the limitations of their denominations.

No matter what you believe surely we can all agree to this?! When you wonderful people on this website share your stories both positive and negative you could very likely be helping someone else reclaim their life and even possibly be the first rays of light in the dawn of human thought.

I have been inspired and to a large degree "saved" by the stories I read here,but, without a doubt you have all helped me find clarity and a ray of sanity in an all too often insane world. Thank you all.

at Sunday, April 19, 2009
Email ThisBlogThis!Share to TwitterShare to FacebookShare to Pinterest