Who's knocking on my door? 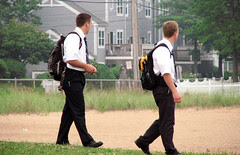 It is noon, I am working at home. There is a knock on the front door.

I open the door to see two young guys, smartly dressed, both in olive green shell jackets and black pants. It is immediately apparent they are selling religion.

"Hello," says GingerBoy, probably aged 21, "My name is Waite and I'm a missionary". The other guy, DarkHair, introduces himself also. I don't catch his name but I think he is about 23. Both of them have serious black badges on their identical coats, saying "Jesus Christ of the Latter Day Saints".

Of course, I know exactly what this is.

GingerBoy starts talking and extends his right hand to shake mine. I am irritated. I know very well that this is part of a routine they have been taught. Shake the hand, establish initial rapport, deliver the message. I decline his hand.

I tell them that this is not a good time, and I begin to close the door. I am worrying about other stuff at home, I don't need these guys at my door.

As the door closes, DarkHair asks quickly, "So when IS a good time?" There is an urgency in his voice which close to rudeness. Why would he be pushy? What's this game about? You want me to attend your church? You want to prove you have The Truth and I Need It? Why is that important to them?

Most likely they will return next week for another visit, to update their database.

I know very well if they had stayed, they would have asked what I thought of the state of the world, and that God is in charge, and that they have a special revelation from God, via Joseph Smith and his magic glasses. I know, I know. How to begin disabusing people? I was once a literalist myself; I need to talk with kindness.

Some different "Latter Day saints" visited, about 6 months ago. That time they said welcomingly, "You're new to this neighborhood aren't you? We'd like to invite you to the community center, the Church of Latter Day Saints, it's where local people meet and get to know each other." It was a neat line but I didn't buy it.

Now I have a couple of questions:

1) Why isn't it illegal in America for persons to knock on doors, trying to convince people about their religious views?

2) And why don't atheists and agnostics knock on doors, in the same way?

"Hello, my name is KSS. I have a pamphlet here for you today. Are you concerned about the state of the world? I am what you might call an agnostic. That means we don't really know if there is a God - and if there is, we don't know much about it. The world is a beautiful place and life is very precious. I'd like to encourage you to firmly but peacefully oppose people that are making 'end-times' prophecies come true, destroying lives and the planet in the process. All fundamentalist agendas should be scraped out of politics, do you agree?"

Perhaps my Latter Day Saints will be back next week. I will have to decide whether I am confident to talk to them about my new-found doubt. It's early days for me. I've been on both sides of this.

at Wednesday, April 01, 2009
Email ThisBlogThis!Share to TwitterShare to FacebookShare to Pinterest