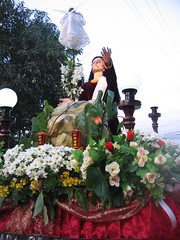 I went to church this Easter. I did it because my entire family was going and I didn't want to upset anyone. I expected the regular sermon about Jesus being crucified, resurrecting, etc.

As I walked into the gospel church, I almost thought I was walking into a fashion show! Everyone had their most expensive Gucci suits and Prada bags and shoes. I was willing to brush this off. Then, there was an impressive light show with the choir -- fancy flood and theater lights lit the stage in the building that holds 2500 people. I wondered how much money went into that and where the money was coming from. Then I found out the source: the choir leader went on for 15 minutes on why we should give money. She ended her little speech with, "Don't you dare leave here without giving anything! Your money is a seed for growth. If you have to, ask your neighbor for a quarter and pay them back later!"

I didn't give anything.

This kind of crap really upsets me.

The sermon didn't even make sense. The pastor was going on and on about Jesus dying and having to resurrect in order to save us. The more he talked, the less he answered questions I have:
I went a little off the topic there. But anyway, I concluded that I would have rather spent Easter celebrating Easter, not passover. Easter, by the way, is derived from a Pagan celebration after the Spring Equinox.

at Sunday, April 19, 2009
Email ThisBlogThis!Share to TwitterShare to FacebookShare to Pinterest