The Stage Is Just Way Too Big 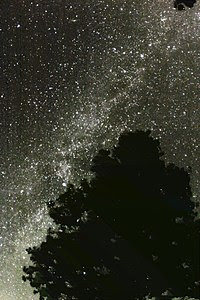 According to the Bible, we humans are clearly the crowning achievement of God’s creation. We are what it’s all about, the central actors, what it was all made for. But, there’s something terribly wrong with this picture.

Consider for a moment, if you were staging a play for a half dozen actors, would you build a stage four miles on a side for the performance? Wouldn’t this be a bit like building a universe several billion light years across and then putting your actors all on one tiny planet in the suburbs of a fairly average galaxy, revolving around a relatively modest star?

It is not easy to grasp how big the universe is. In fact, it is probably impossible to truly wrap our minds around it. But let’s try shrinking it down to a model so that we might just begin to get a feel for the immensity of this stage we are on.


It is not easy to grasp how big the universe is. In fact, it is probably impossible to truly wrap our minds around it. The Milky Way galaxy, in which we reside, contains (depending on source) somewhere between 100 billion and 400 billion stars. So, let’s take a midpoint and assume it’s 200 billion. In our model, then, our galaxy of 200 billion stars could be represented by 200 cubic yards of sand. Now, of course the stars are not really aligned edge to edge as in our model, but we are just trying to get a rough picture of what 200 billion of something might look like.

A typical school classroom might be something like 21 feet wide, by 30 feet long, by 9 feet high. This would amount to 210 cubic yards. Close enough. So, if you fill this typical classroom with sand, it would contain roughly 200 billion grains (stars), and our star, the sun, is just one of those grains. Just one.

And as the infomercial says, “But that’s not all!” Astronomers’ estimates of the number of galaxies in the universe range from about 100 billion to 400 billion. Let’s take the midpoint of 200 billion again (can you see this next step coming yet?). Now let’s return to our classroom full of sand, but this time each grain of sand represents a galaxy containing, on average, 200 billion or so stars. So now, our star is represented by one two-hundred-billionth of a grain of sand in a room containing 200 billion grains of sand.

Now that is a mighty big stage. But, of course, we have totally ignored the vast reaches of space in our example. In our model, to get distances correct, the nearest neighbor grain to our grain-of-sand sun (at 4.3 light years) would be roughly five miles away, and the distances between neighbor galaxies is typically millions of light years.

I will grant that you could legitimately quibble a bit with my estimates of the dimensions of sand, stars, galaxies, etc., but there is no escaping the essential fact that the stage is awfully, awfully big for our little play. In fact, it seems the ultimate in hubris to claim, as the Bible does, that it’s all about us. In the grand scheme of nature’s universe we may amount to less than a tick on an elephant’s ass.

[Note: The Hubble Ultra Deep Field photo of deep space also helps to give a feel for the vastness of space. This is an image of a tiny field of sky about the size of a dime at 70 feet, and vacant in any small telescope, yet it contains an estimated 10,000 galaxies.] http://hubblesite.org/newscenter/archive/releases/2004/07/

at Monday, April 13, 2009
Email ThisBlogThis!Share to TwitterShare to FacebookShare to Pinterest

Oh, the majesty of our God, three in one.