Does Evangelical Giving Do the World Good? 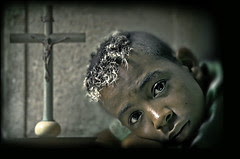 This week, Barack Obama is expected to sign into law the GIVE Act, which aims to increase volunteering. It gives young people a way to pay for education with public service. Some right wingers have been squawking because the plan excludes religious activities like church attendance and outreach from the social service hours that can be applied for credit. Personally I’m relieved. I want my taxes to pay for programs with clear benefits, and I want the wall separating church and state repaired. But before we secular types get all high and mighty we should take a look at why some people think that faith based programs are necessary for the good of society.

Several studies (e.g. here and here) show that religious people give more dollars and volunteer hours to charity than do nonbelievers. Evangelical Christians have been trumpeting these findings: No matter what you may think about our exclusive offer of salvation, our religion is a social good.

As a former Evangelical I tend toward skepticism, especially when it comes to data that have been assembled and promoted by ideologues. And yet I’m inclined to suspect that these results tap something real. Sociologists have found that tribal identity increases altruism toward other members of the tribe (though at the expense of outsiders). In many ways, a religion functions as a tribe. Besides ordinary in-group/out-group effects, religions explicitly teach that we are made to serve something larger than ourselves. They encourage members to give of themselves to gods, co-religionists and others---in part by promising deferred compensation. But perhaps even more importantly, they provide a community and structure for doing so.

Let’s assume that religious people are more generous or altruistic. An interesting follow-up question is this: Where is this generosity directed? Does it serve the cause of goodness? By a scientific definition of altruism, suicide bombing is an altruistic act supported by religious attendance. It is the individual sacrificing his life (and reproductive potential) in the service of another individual or the greater collective--in this case Allah, Islam, the Muslim brotherhood. But is it as a social good?

A belief set can redirect altruistic do-gooder impulses away from activities that actually serve human well-being and onto activities that serve to replicate the belief set itself. Within conservative Christianity, a tremendous amount of donated time and money is solicited for conversion activities: Go ye therefore, and teach all nations, baptizing them in the name of the Father, and of the Son, and of the Holy Ghost. Is religious recruiting a social good? On this, most evangelists and I would have opposite opinions, at least about Christian recruiting. (We might be more in agreement about the proselytizing done by Hare Krishnas or Scientologists.) It is only fair to give evangelical missionaries credit for their intentions. If you truly believe the unsaved are going to be tortured eternally, then there is no greater good than to spend your life saving their souls. By comparison, nothing else matters. A missionary, operating on this premise, may experience herself as highly generous, because she is.

She also might protest that independent of afterlife benefits, accepting Jesus makes people happy in this life, here and now. This is true. Sometimes. Jesus worship can fill people with deep joy. It can get alcoholics to stop drinking and abusers to stop abusing. It can save marriages. But sometimes the opposite happens. (See thousands of testimonials at exChristian.net). Pentecostals point to happy African church-going children singing and dancing. A former Pentecostal might point to the African children who have been kicked out of their communities or killed because new converts to Pentecostalism saw them as witches and took their took their Bibles literally. The net here and now benefits of proselytizing are arguable.

A darker way to look at Christian "outreach" is as an example of how viral beliefs, sometimes called meme complexes, can exploit the human tendency toward altruism. What I mean is that a belief set can redirect altruistic do-gooder impulses away from activities that actually serve human well-being and onto activities that serve to replicate the belief set itself. When the Asian tsunami hit, a highly successful Seattle mega church directed members to do three things: pray for people who were affected, give to Mars Hill Church, and give to the Mars Hill church-building work in India. Why not reverse this--pray for Mars Hill church, pray for our missionary work, and give money to the people who were affected? Churches that make suggestions like these are, on average shrinking. Churches that follow the Mars Hill model are growing.

Daniel Dennett in the first three pages of his book, Breaking the Spell, beautifully narrates how a similar redirection occurs in nature. An ant climbs to the top of a stem of grass and lingers there. Why? Not because it is adaptive for the ant. Rather, another organism has take charge of the ant’s brain and to reproduce it needs the ant to be eaten by a cow. When a person’s altruistic impulses are directed toward winning converts, it is valid to ask whether they are actually serving human wellbeing or simply serving a mind virus.

If we don’t count their recruiting activities, do Evangelical Christians actually give more than non-religious? Do they give more to things that we humans pretty much agree are social goods? Sorry, all you fellow secularists, thought the gap narrows the answer still appears to be yes. Besides outreach, giving to churches funds what economists call "club goods". Churches often do a wonderful job of providing and organizing members services: warm meals for kids with a sick parent, adventures for teenagers, housing for young adults, support during bereavement, even free counseling or legal services. And with regard to outsiders, even if food, medical care, or friendship is offered primarily as bait to set a fish hook, the food and medical care are real.

But even beyond the money given to churches, religious people appear to give more to ordinary charities than secular folks do. At least based on self report data, religious participation and religious giving are positively correlated with giving to nonreligious charities like educational institutions, social services, even blood banks. This appears to hold true for the 40ish percent of Americans who self-describe as Evangelical or born again as well as their more theologically open counterparts. If this makes those of us who are freethinkers squirm a bit, perhaps it should.

You might protest that that charity should be only a way station on the road to justice, and that your energies are better spent working for structural change. Many secular folks and liberal people of faith believe this is true. I know I do. As a non-theist, I once sat on the nonprofit board of an organization called the Washington Association of Churches because their mission was my mission: Do justice, love mercy, walk humbly. Like me, they sought solutions that went beyond charity.

But even if justice is the destination, those way stations are still needed. Most of us agree that both generosity and justice are virtues. We prefer to live in a world where both are in rich supply. Maybe, now that freethinkers are coming out of the closet it is time for us to begin thinking about how to create our own communities and structures that empower personal generosity. Since we don't have a sales mandate or a promise of treasure laid up in Heaven, we--unlike many Christians--are free to give without expecting something back except maybe a bit of good will. Recently Seattle Atheists organized a blood drive for members. Now, that’s what I’m talking about.

at Thursday, April 16, 2009
Email ThisBlogThis!Share to TwitterShare to FacebookShare to Pinterest