The cult of the southern Christian military hero 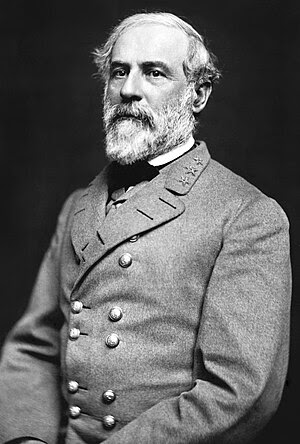 As Christian hypocrisy goes, one of my favorites is what I call "The cult of the southern Christian military hero." There are more than a few Christian websites doing this. The Reconstructionist movement run by ultraCalvinist diehards is one of them. They have put Thomas J. "Stonewall" Jackson and Robert E. Lee in their pantheon of little gods next to Jesus. It must have been a mentally orgasmic day for the Reconstructionist honchos when President Ford restored the full rights of citizenship to General Lee in 1975. (And this rehab job is fully supported by traditionalist Catholic outfits since Pope Pius IX supported the Confederacy) Maybe the Vatican can make them honorary Catholics and declare them saints.

This claptrap is really sad when one considers that Lee kept the slaughter of the Civil War going even after 1863 and Gettysburg, thus opening the way for the ruination and destruction of "Old Dixie" over the dead bodies of many more men on both sides. Was that the Christian thing to do? Fortunately, Jackson got killed earlier so his war skills could not be used to kill off many more. And yet, both of these men who took up arms against their country in treason are lauded more than ever by Christians of all stamps. There is even a cultic type of art surrounding these men which can be found frequently on display at Army and Air Force PX outlets.

at Monday, June 01, 2009
Email ThisBlogThis!Share to TwitterShare to FacebookShare to Pinterest