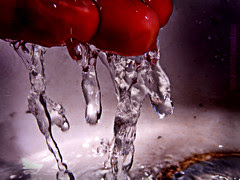 The Apostle Paul reasons-- wrongly and without even bothering to cite evidence to make his case-- that one's failure to believe in God drowns the non-believer in a cesspool of immorality:

"Even as they did not like to retain God in their knowledge, God gave them over to a reprobate mind, to do those things which are not convenient; being filled with all unrighteousness, fornication, wickedness, covetousness, maliciousness; full of envy, murder, debate, deceit, malignity; whisperers, backbiters, haters of God, despiteful, proud, boasters, inventors of evil things, disobedient to parents, without understanding, covenantbreakers, without natural affection, implacable, unmerciful."

Paul tries to sneak this tenet of his by us right from the start (Romans Chapter 1) and declines to acknowledge that one can be agnostic or atheist-- not liking to "retain God," at least not Paul's God, in one's knowledge-- and still be very moral, just as moral or even moreso than the best of Christians. An honest person would have acknowledged that many if not most non-believers are not the culprits and criminals that Paul describes. And one could very reasonably argue just the opposite-- that honest and thoughtful disbelief in Paul's God is not only a respectable moral choice, but is possibly a prerequisite to true morality.

A contrary conclusion 180 degrees opposite Paul's thesis should be considered in any contemplation of belief and its real-world consequences-- that belief in God can cause and has caused the cesspool of, in Paul's words, "things which are not convenient," such as a painful and counterproductive inordinately introspective neurosis about "sin" and a brainwashed, branded heart and mind, unwilling and unable to consider truth that conflicts with the supposed inspired revelation of the biblical text. And who can argue seriously that, as with other faiths, retaining the biblical God in one's knowledge can and hasn't caused a history of worse hate and worse moral horrors than "fornication, covetousness, envy, debate, whispering, spite, pride, and disobedience to parents?"

Similar falacious reasoning forms the foundation of Jesus' teaching. At the heart of his teaching is the premise that, he said, if a man lusts after a woman in his heart, he has committed adultery with her already. Is that so? Many, many thoughts will cross our minds in our lifetime. Like dreams, many are random, out of our will and control. We should no more be condemned for the bad ones than we should be rewarded for the good ones. In fact, it's when we restrain ourselves from following through on the bad thoughts that we should be most commended. That's what a mature, civilized person does. No, it's not the thought that counts. It's the action. And furthermore, by Jesus' same reasoning, if I have wanted or wished that I could help the misfortunate, heck, I've helped them already. But the bible doesn't teach that, does it? No, because Paul's and Jesus' aim was to make us all feel guilty and inadequate (sadly, with the attendant consequence of being depressed or neurotic or at least worn down by the inner self-loathing) so that we can see our "need" for the bible's god. Did no one see through this nonsense in Jesus' and Paul's day? Oh, yeah, I bet they did. They were called non-believers, heathen, and infidels and Christians were told not to keep company with them-- because they dared to think for themselves, something Christians learn not to do so they don't see the false teachings of their leaders.

Paul's and Jesus' two thousand year old premise is at the heart of much of Christianity's techniques, as Christians teach that lives become a wreck due to wrongs wrought from a lack of belief in the Christian God. Some down and out, sad and sorry souls convert to Christianity in hopes of a better moral life. Some attain a semblance of a better life. But at a price. And many do not. But one's lack of belief is not and was not the cause of immorality. And a false belief does not make for a healthy cure.

So next time someone says Jesus was a great teacher, you and I know the truth. And it shall set you free.

at Monday, June 22, 2009
Email ThisBlogThis!Share to TwitterShare to FacebookShare to Pinterest