God needs something from us? 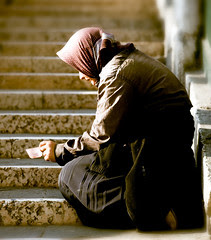 NOTE: I'M NOT SAYING I BELIEVE THIS STUFF, I AM MERELY POSTING IT FROM A PERSPECTIVE AS IF IT IS THE TRUTH

So we have this god, who has infinite power, can do anything, and created everything. Anything he wants, he can get it at his finger tips (or whatever gods use). Wants to create a planet? Boom! The planet is HIS. Wants someone to have a billion dollars? It's all their's! Wants to eliminate anything that pisses HIM off? Darn right HE can do that!

Now we have us humans. Most of us would kill for a millionth of the powers god has. Sure, the majority of us can walk, run, talk, and complete tasks, but that is limited. I can only run so far, work so hard, and unlike god, I will, eventually, die. Because of my limited lifespan, strengths, and knowledge, I can only do so much for my fellow humans, and absolutely nothing I posses can please a god (considering god created me and everyone else). I. HAVE. NOTHING.

You'd think god would understand this and just want us to enjoy what ever life he gave us on earth, not worrying about eternal judgment. You'd think that unlike us humans, god wouldn't get worried about anything seeing he has all control over everything. And if god really loved humans, he wouldn't leave us on earth, expecting us to somehow find him before we die. He'd have it worked out for us and only have us worry about what we know here on earth. When I was first told about god in my preschool years, I was comforted by the thought there was a being that can do anything and make sure everything would work out. If you could do anything, wouldn't you make sure things would work out for everyone?

Well, according to Christianity, that is not how it works. Though god gave us 'free will', he doesn't want us using it. Any pleasure we seek is condemned; anything we want to do for ourselves is frowned upon; and the only things looked well upon are being board at church and being a meek servant (for what?). And because we cannot live up to this standard, god demands that we pay for it -- FOREVER.

And I know the first thing that's going to come to mind for Christians, "But god sent JEEZUZ to die so we'd be saved." I don't want to hear it. The mere fact that god demanded some kind of suffering to appease him is just plain wrong. We shouldn't have to jump through all these hoops to avoid eternal punishment. He could have easily overlooked petty mistakes. He created the universe, he should be able to find a less drastic alternative to sending someone else to suffer for us (assuming he even needed some kind of payback in the first place). A god that powerful could have probably avoided anything that peed him off (or foreseen it).

So what am I saying here? It's simple. God has everything, god doesn't need anything. We don't have everything and there are things we need that can be provided by god. But instead of providing them, he actually expects us to jump through hoops to repay some kind of debt THAT WE CAN'T PAY OFF IN THE FIRST PLACE. He expects us to be concerned about things that are beyond us on earth (we're supposed to just 'believe'.), and apparently doesn't give a damn about how shitty our lives are here on earth. And this is "love"? BULL CRAP! If anyone on earth were to deprive others of their basic needs despite being well off, we would call them a heartless bastard, but when god does it, who can EASILY better the lives of others and NOT send them to hell for not believing, we call it love. And if god really resents us so much as to put us through all that, than why the hell did he create us in the first place?!

Well, that ends my rant. Any feedback is welcome, especially if you're a Christian and can explain this. I would love to hear where I am wrong (if I am at all).

at Sunday, June 14, 2009
Email ThisBlogThis!Share to TwitterShare to FacebookShare to Pinterest