Christian Belief through the Lens of Cognitive Science Part 5.75 of 6 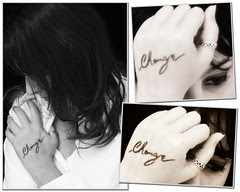 Image by apesara via Flickr. "Change... We don't like it, we fear it, but we can't stop it from coming. We either adapt to change or we get left behind. And it hurts to grow, anybody who tells you it doesn't is lying."

The most useful piece of learning for the uses of life is to unlearn what is untrue. –Antisthenes

My parents, as I’ve said before, were three for six in terms of producing believing children. All of us accepted Jesus as our personal savior. We all entered the “age of accountability” as born-again Evangelicals. But that’s not where we ended up. For each of the three who lost faith, the path was different: One came to see the shame of his homosexuality, not as a personal failing but as a failing of our moral ancestors – which then exposed the host of other moral failings in the Bible. Another was confronted by a small child’s cancer which unearthed a mother lode of buried questions about God’s beneficence and then existence. The third was simply born able to think his way out of most boxes, and he used this ability to the detriment of his salvation.

One thing we know does not help is arguing. Literally thousands of testimonials at websites like ExChristian.net describe journeys out of belief, each unique. They are written by folks who were born into Christian homes and others who joined during adolescence and even people who moved into and then out of belief during adulthood. A surprising number of contributors to the site are former pastors or missionaries who now feel a sense of remorse about their recruiting work. Most never expected to be where they are today. As one former Christian put it, “Through most of my life I was sure beyond doubt that god was real and that he had bought me as one of his own through the blood of Christ. I could not have conceived that one day I would lose my faith completely and come instead to believe that god is nothing more than a human invention.” (Darrel, ExC, ADGLW, 6/4/2009) Despite their best efforts and intentions, people change.

With all of the ways that we resist new ideas, one might think that awakening to complicated realities is hopeless. But there is another half of the equation. As much as we tend to be wary of threats against our world view, we are also wired to seek truth. Being able to determine what’s real is a crucial part of survival: In order to thrive, we need to understand the contingencies that actually govern our wellbeing, and in order to thrive among other humans, we need means of detecting deception and even self-deception among our fellows. Accurate knowledge is valuable stuff. In fact, truth is so highly valued that even self-replicating ideologies extol the virtues of truth--they just assert that they have found it.

How do we change our minds? Belief revision as a process has long been studied by philosophers. The philosophical approach generally assumes humans are rational beings: Logical propositions come into conflict with each other or with evidence, and people revise their beliefs to restore coherence. This description works pretty well to explain how we adapt to new information, when we don’t have opposing social or emotional pressures. If I have little invested in my old assumptions, it is pretty easy to correct a faulty belief in the presence of new information. The problem arises when the community of people around us, or the community of assumptions in our own heads exerts pressure resisting change. Family systems therapists say that when an identified patient begins getting better, family members often give unconscious “change-back” messages. The whole system is organized around a certain dynamic or set of roles, and even positive change bumps up against a tough, resilient homeostasis.

How do we change our minds? Consider another analogy. In 1962, Thomas Kuhn wrote a seminal book entitled, The Structure of Scientific Revolutions in which he introduced the term “paradigm shift.” He argued that in science change rarely happens in a steady incremental way. Rather, a generation of scholars operates out of a (tough, resilient) set of assumptions, a paradigm, and new information gets assimilated or explained within the paradigm. But gradually contradictory evidence accumulates until it reaches a tipping point, and what Kuhn called a “paradigm shift” occurs. Previously ignored patterns in the contradictions abruptly becomes clear, and the community toggles to a better paradigm that will guide inquiry until evidence accumulates and these assumptions, too, get revised. Kuhn wrote about the hard sciences, but scholars since have come to realize that a similar process can take place in other scholarly communities and even in individuals.

An informal review of de-conversion stories at ExChristian.net, suggests that, for many people, the process of faith revision happens much like Kuhn’s paradigm shift. Contradictory evidence accumulates slowly over time. The contradictions can be rational, moral, or emotional. One Christian starts noticing Bible passages that are at odds with each other. Another is troubled by a preacher’s justification of war and greed. A third writhes when a social misfit is tormented and then ostracized by a youth group. At first, perhaps for years, each finds ways to explain these contradictions within her existing theology. Then in the presence of some triggering event, a pattern becomes clear, and she realizes she can no longer call herself a believer. Julia Sweeney’s monologue, Letting Go of God

, offers a tender, funny account of her efforts to reconcile faith with experience before she makes the startling discovery that she no longer believes.

Do former Christians feel loss or relief when they finally give up on belief and adopt another form of spiritual practice or none at all? Do they develop psychological symptoms or lose them? This depends on the nature of belief and social support at the time of de-conversion. After a long quest that led from Catholic Christianity through Eastern and New Age spirituality, Sweeney experienced only mild dismay and sadness when finally faced with her own disbelief. Others have it worse. Some former fundamentalists describe anxiety, depression, panic attacks, or even suicidal despair. They may seek mental health services to help them deal with the loss of friends, family or core parts of their former identity. At the other end of the spectrum are those who feel like chains have fallen away. Freed from an exhausting, guilty battle to maintain faith, they happily take up the question posed by poet Mary Oliver, “Tell me, what is it you plan to do with your one wild and precious life?”

Just like the born again Christians who feel transformed by faith, those who feel freed from faith want to share their discovery with those they love. Many former Christians grieve the fact that their spouses, children, or dear friends are still embedded in what now appears as an enormous cult. But what are the options? Attempts at conversation often fail, bringing tears and conflict, even shunning or divorce. A couple of elderly scientists are not allowed to see their grandchildren because contact might lead the children astray. A mother laments that a grown daughter won’t let her visit because of the mother’s loss of faith. A college student who has been caught reading “spiritual pornography” isn’t allowed to be with his younger siblings unattended. What is a former believer to do?

One thing we know does not help is arguing. Research shows that after an argument, both sides tend to be even more entrenched in their old positions. By lining up our best arguments, we are more likely to convince ourselves that we are right than to convince anyone else. Perhaps the best advice is to adhere to the formula that has worked well for other hidden and stigmatized minorities: Be out. Be yourself. The more negative the stereotype of nonbelievers, the easier it is to challenge that stereotype simply by being a decent human being. When it comes to explicit conversations about religion, try to arrange time to sit down and really talk through your changes rather than having the differences of opinion come up in bits and scraps. Lay out your own thinking, and then let it be. For those you love, either the paradigm shift will happen or it won’t. It is not in your power to control anyone but yourself.

Note: I will be off grid and unable to respond to comments till Labor Day :).

at Friday, August 07, 2009
Email ThisBlogThis!Share to TwitterShare to FacebookShare to Pinterest