Who Shares the Blame? 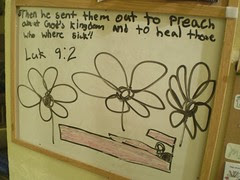 The father of an 11-year old girl, who died in 2008 of undiagnosed diabetes, went to trial in Wisconsin. This man and his wife believed that prayer would cure their gravely ill daughter, even after she became too weak to walk, speak, eat, or drink. Dale Neuman told police he believed God would heal his daughter, Madeline, right up until she stopped breathing. Police also said that Neuman “professed to believe God was going to bring Madeline back to life.”

Madeline Neuman died because of the false claims of the Bible, but she is only one of millions. Dale Neuman was found guilty of second-degree reckless homicide for praying instead of seeking medical help for his daughter. While I believe he should have been tried, there is another side of me which sympathizes with Mr. Neuman. He is, after all, a victim too. He was scammed, probably since childhood, and now he’s suffering for it.

Frankly, I am a bit surprised that this doesn’t happen more often. The priests and preachers have been telling us for 2000 years that God answers prayer. They too have been duped by those ancient texts collectively called the Bible. The Bible does indeed say that prayer can move a mountain (Matthew 17:20), and Jesus is quoted as saying, in no uncertain terms, that whatever one asks in His name he will receive (John 14:13). Fortunately, the vast majority of us, even regular church-goers, know these are untruths. But, unfortunately, few seem to see the obvious; that if the Bible is false concerning such important claims, then it is undependable and we shouldn’t be trying to live our lives by it, or recommending it to our children.

Madeline Neuman died because of the false claims of the Bible, but she is only one of millions. During the Middle Ages, millions more died because of one sentence in that book; “Thou shalt not suffer a witch to live (Exodus 22:18).”

Of course, the faithful will insist that modern believers don’t do that stuff anymore; they don’t kill suspected witches or heretics. True. And this is exactly my point. It is only when we ignore such Biblical nonsense that we begin to understand how the world really works and start to treat each other in the interests of humanity, not of gods.

The simple, obvious truth is this: if prayer really worked, then Madeline Neuman would still be alive today. If strength of faith matters, as is claimed, the Neumans qualified in spades. Very, very few people have the consummate faith that Dale Neuman and his wife had. After all, they trusted the Bible’s words with their daughter’s life.

I suspect the Neumans now have some serious doubts about the Bible’s dependability. But the preachers and other believers in their billions continue to tell us the Bible is the truth and the way, and in some sense they share the blame for Madeline Neuman’s death by keeping this fiction alive. How many more have to suffer or die before this ancient book is confined to the mythology section of the library where it belongs?

at Thursday, August 06, 2009
Email ThisBlogThis!Share to TwitterShare to FacebookShare to Pinterest