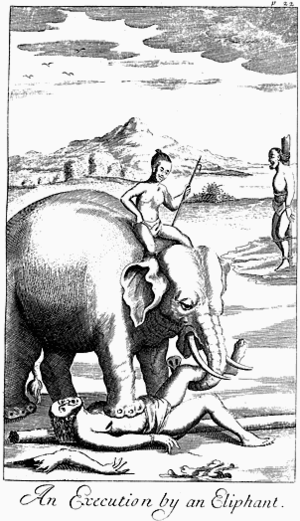 Yet another blessing of non-theism or atheism for American society could be immense. What if our justice system were so nonreligious that Old Testament type of vengeful punishment of criminals were not necessary? What if judges judged reasonably instead of doing the biblical eye-for-an-eye bit for criminals? Our extremely sick justice system now insists that punishment must fit the crime.

Reasoned consequences or responsible restitution is really what should fit the crime, not punishment as such. Taxpayers cough up over $30,000 per year per criminal in prison, violent or not; this exceeds the annual cost of education at most of our excellent universities. We can design and execute really effective probation programs for far less!

What if criminals were sentenced according to their ability to be responsible and pay back, make restitution to society in accordance with their offense against society? Violent criminals would stay in jail to protect society, not to punish them. Non-violent criminals, under regular and thoughtful probationary supervision, would work to heal the society they wounded; they would pay back to society according to their talents and financial ability.

I think it is generally irrational and it should be considered immoral to imprison smart, non-violent people like Martha Stewart and those truly major criminals that destroyed Enron, Worldcom, Global Crossing and Tyco, in order to punish them.

“Vengeance is mine, says the Lord!”

Please let the Lord punish them! Don’t punish or fine already wounded society by taxing society further to house the non-violent who do cooperate with rational and effective probation programs. Just because it would take some serious and extended thought to develop effective reason-based probation programs does not excuse us from developing same.

Firm and reliable consequences for irresponsible behavior are essential to an intelligent justice system. Punishment commonly causes counterproductive anger that deepens the anti-social tendencies in the criminal. Why should the above-referenced talented white-collar criminals be housed by society when they could be effectively depositing millions of dollars every Saturday into the coffers of their local probation programs? The basic reason is primarily punishment.

And what does punishment as such profit society?

Some of these non-violent executives hurt millions of citizens. Why not fine them very, very heavily for the stolen millions or billions, the fines of restitution (plus collection costs) to be paid off weekly and in person to the responsible legal authorities? It’s utterly and inexcusably stupid and wasteful to bury such talent in jail, then bill the working taxpayer for their prison expenses (or their extensive prison-avoiding legal expenses). Such punishment shows an outdated, Old Testament religious concept that further punishes an already wounded society!

Non-violent blue-collar criminals could work at their jobs to earn competitive or union scale pay, likewise under responsible probationary supervision. They, too, turn in their fines weekly by way of restitution to the community or families they wounded.

Non-violent criminals stay out of jail as long as they obey the strict and productive terms of their probation. When will we learn that it is very difficult to punish productively? This vengeful punishment is an idea from Mosaic times and based on an assumed God who named himself “Jealous.” The Bible has God saying,

“Vengeance is mine; I will repay.”

Let God grab all the vengeance he can; a thoughtful, un-superstitious society needs restitution, not vengeance.

Firm and reliable consequences for irresponsible behavior are essential to an intelligent justice system. Punishment commonly causes counterproductive anger that deepens the anti-social tendencies in the criminal. I don’t think it’s reasonable to keep well over 2,000,000 Americans (almost one percent of our citizens) behind bars when less than 30% of those prisoners are violent threats to society (Time Almanac 2000).

No, I am not going soft on crime. As a psychologist, I know that the death penalty (I prefer “the death consequence”) is very under-utilized, and, yes, contrary to a lot of doctored and biased “research reports,” it is a definite deterrent from crime! The next time you see any sort of “research report” that concludes that the death consequence does not deter, check both the authorship and the assumptions of such a report. With only rare exceptions, a person’s strongest drive is to continue living. How can such a basic fact be ignored by so many?

A life sentence without possibility of parole for the non-violent criminal is generally ludicrous. It punishes the criminal endlessly while it expensively punishes the society that has already been hurt by the criminal. The death consequence, for those and only those who are certainly responsible for the most heinous crimes, is often far more appropriate than such outrageous sentences. Never should a doubtfully guilty person be executed; but with the help of DNA testing, many of the old doubts can be set aside. At the very least, the violent criminal under such a silly sentence as “life without parole” should be able to choose the death consequence as an option. “But, no, only God can take a life.” Baloney! Did God kill the drunk driver crashing into the concrete wall?

Such an illogical stance is about as outrageous as the 2006 case of California murderer Clarence Allen. He had been scheduled for execution, but at 75, legally blind and nearly deaf, his attorneys appealed for a stay of execution all the way to the U.S. Supreme Court. And what was the appeal based on? Not that he was innocent, not that he did not deserve to be put to death, but the appeal was based on fact that if the state were to put such an ill old man to death, it would be cruel and unusual punishment!

Do you think his appeal lawyers were doing their work pro bono, or is it much more likely that they were getting paid well for such ludicrous appeal efforts?

Our religiously vengeful politicians, reflecting the attitudes of their constituencies, over-legislate and micro-manage our justice system more and more, and their lawyer friends capitalize on it handsomely. As a result, punishment of the criminal continues to grow in importance. One frightening result is that good judges find they are impotent to use good judgment, get discouraged, retire early and leave the judges’ benches to the more politically correct judges. Retiring U.S. district judge, John S. Martin, Jr., wrote in The New York Times (2003):

“When I took my oath of office 13 years ago, I never thought I would leave the federal bench. While I might have stayed on despite the inadequate pay, I no longer want to be part of our unjust criminal justice system.”

I am barely scratching the surface of this truly immense American problem of crime and vengeful punishment. But can you already see that many billions of tax dollars could be saved annually if vengeful religious-type punishment-of-the-wicked were thoughtfully removed from all our penal codes? Would “Codes of Consequences” be far better than “Penal Codes”? If the outdated concept of punishment as such were removed from our justice system and if a system of fair consequences were firmly followed, I doubt it would be necessary to lock up about one percent of our population as we do now.

(Excerpt from pp. 157 – 160 of Out of God's Closet: This Priest Psychologist Chooses Friendly Atheism

at Saturday, August 08, 2009
Email ThisBlogThis!Share to TwitterShare to FacebookShare to Pinterest