Look Out For Those Lookouts 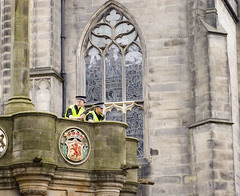 My wife tells me that I think too much, to which I might point out that I’m just compensating for all those who refuse to think. For example, she watches those TV nature shows with animals in their native habitats. These shows aggravate me. I want to watch animals, but they keep interrupting by showing the faces of narrators or cameramen. Also, some insist on giving the animals names. I’ve watched gatherings of geese, ducks, turkeys, etc, and notice how at least one of them is assigned as lookout. So, I have my own commentary that ties into thinking too much, and here’s how it goes.

“Harold” is lookout. He might not be the brightest or wisest, but it’s his turn. It’s a lot of responsibility, so he’s hyper-alert, stressed. Now if Harold has eaten the wrong grass, has had a hard previous night, and is super vigilant, he just might see things that aren’t there, sound the alarm, and everyone scatters. When all are scattering, doubt is not a consideration. It is my observation that religious beliefs can cause the same reactions, for the same reasons.

As higher animals, with more complex brains, ergo imaginations, humans make ambiguities into entities such as souls, gods, devils, genies, etc. Then humans give adoration to these idols of ambiguities. Not only that, but humans are often turned into symbols. If you think about it, this would explain the fears, phobias, and panics which lead to persecuting “Christ-killers,” killing witches, etc. Doesn’t this talent for making abstract ambiguities equal to or superior to realities make humans their own worst enemies, much as the lookout-dependent herd can be led into unnecessary panic by a lookout who sounds the alarm for some threat which doesn’t exist? And if everyone has been eating certain grass…well, you can see where religions amplify this effect.

We ought to take a good look at all those “Word worshippers” out there who are constantly stirring up the herd into not only unfounded joy, but bizarre fears. As animals capable of analyzing ourselves, we ought to seriously ponder the possibility that these gurus and prophets and their followers have been brain-washing the crowds and themselves. We should also note the very real possibility that the catnip that turned on all the “holy men” to their visions came from syphilis, hallucinogenic plants, mercury and lead poisoning, peyote, wine, etc., all veritable factories of visions and miracles.

at Monday, August 24, 2009
Email ThisBlogThis!Share to TwitterShare to FacebookShare to Pinterest