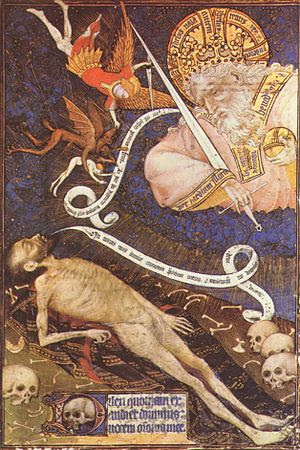 Consider the matter of the soul. Ask a Christian when the soul enters the body and he may say at conception, or some number of weeks after conception, or at birth. Ask him how he knows this and the only answer he can give is that he read it, someone told him, or “it just makes sense.” Christians have been arguing amongst themselves about this for thousands of years. Ask him how big the soul is and he may answer that it’s microscopic, or fills the whole body, or anything in between. Again, he knows this because he has read it or been told it. Ask him where in the body the soul resides and he may say the heart or that it’s diffused throughout the body. Again, he’s read this or been told this.

If it happens that the soul simply doesn’t exist, then Christianity has a huge problem concerning the afterlife. Ask him why science has never been able to detect or measure a human soul and he will likely answer that’s because the soul is immaterial. So is it matter or energy? He will likely say it is energy. What kind of energy - electrical, magnetic, gravitational, or chemical? He will probably say that it isn’t any of those, but something entirely different that science can’t detect. How does he know this? Well, because science has never detected it, of course. The circularity of this answer may or may not occur to him, but even if it does, it’s not likely to trouble him because he takes it as a given that the soul exists and, if no scientific instrument can detect it, then that’s just too bad for science.

Ask the Christian if anyone ever demonstrated to him the existence of the soul and he’s going to have to think very hard before answering. The real answer, of course, is no, but he may well come up with some cockamamie story that purports to be a demonstration.

The problem here is that all the evidence for the soul, ALL THE EVIDENCE, is hearsay. People have written about this entity, and they have talked about it, but as far as anyone truly knows, it was all just made up. No one has ever demonstrated the existence of the soul, and this is why no one knows - so there is no consensus on - when it enters the body, how big it is, where it resides, or what it’s made of. Even the Bible is curiously silent on these issues.

If it happens that the soul simply doesn’t exist, then Christianity has a huge problem concerning the afterlife. Obviously, the human body does not survive death since it is routinely either buried or cremated. Then what does survive, if not the soul? Without the soul, heaven and hell are meaningless concepts because there is no way to get to either. And, how an immaterial entity could contain the essence of an individual human – his memories, his beliefs, his personality - simply beggars the imagination. Is it like the code in old American Indian smoke signals? Now it’s not surprising that the Christians have made something up, but how many are aware of just how little evidence there is for the soul, on which depends the essence of their entire religion? How many, do you suppose, have ever given a serious thought to this problem?

at Friday, August 14, 2009
Email ThisBlogThis!Share to TwitterShare to FacebookShare to Pinterest