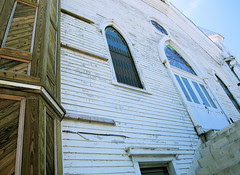 I enjoy poking my finger in the eye of religion whenever the opportunity arises, and I thought you folks might get a chuckle out of my latest foray onto the Letters-to-the-Editor page of one of our local weekly newspapers. The only editing done to my submitted version was the elimination of the clause, “if the editor has the courage to print this letter,” which was obviously intended to challenge him. Frankly, I was stunned to see this letter was actually published as I gave it about a 10% chance. I think the lesson here is that some editors will publish nearly anything, even calling Jesus a liar, if you directly quote the Bible and turn your comments into questions whenever possible. Of course it also helps that I live in Maine, well outside the Bible belt. The letter follows.

“I’m confused. Can someone please explain something to me? In his column on November 19, Doug Wright wrote about church repair and the use of U.S. Government “historic preservation grants” for this purpose. It seems to me that the government has more than enough truly necessary issues to spend money on (including universal health care) without supporting churches (except for the one-hundredth of one percent which are architectural wonders).

I enjoy poking my finger in the eye of religion whenever the opportunity arises May I remind the reader that church properties are already tax free, so taxpayers, whether they are believers or not, are already providing financial support for religion? Now they want to double dip from the government trough? Yet, it’s widely considered a no-no to speak out against religion in our society. Secondly, would it be okay for non-majority religious properties to receive grants, say mosques, or synagogues, or pagan, Scientology, or Wiccan “churches?” But what really confuses me is that according to the Bible, Jesus is quite willing and able to help the believers with such matters, so why is there any need to ask the government for help?

There is more in Matthew 7:7-8, "Ask and it will be given to you; seek and you will find…For everyone who asks receives; he who seeks finds...”

Given the privileged position religion holds in our society, if the editor has the courage to print this letter, I will no doubt be accused by some as being offensive in objecting to more government aid for religion. However, when open debate is denied, progress is stifled and the truth suffers.

In light of the above words of Jesus, I don’t understand why the government has to help Christian congregations maintain their buildings. At the least, couldn’t some reader out there explain to me why Jesus didn’t mean what he said? Isn’t that fair?”

at Wednesday, December 02, 2009
Email ThisBlogThis!Share to TwitterShare to FacebookShare to Pinterest