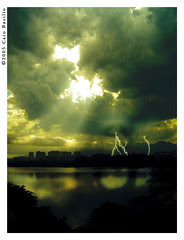 It's been over a year and a half since I wrote My Ex-timony Heaven, Hell and My Bodhisattva Vow. In the interim, a few noteworthy things have happened to My belief stricture, uh, structure.
"Whaaat?" you exclaim. "Theist to atheist is not a 'slight shift'."

Well, it was for Me. Even at the height of My ecumenical polytheistic woo-woo, speaking ex officio in full Springy Goddess regalia (White linen robes, bag of hand-carved runes, snifter of Green Chartreuse liqueur, and razor-wit-sharp Clue-By-Four), I remained open to the possibility that maybe...

...The gods exist only in the human imagination.

Oddly enough, that admission instantly made those gods more accessible to the imagination. I can't prove to you empirically that the Parking Gods provided that great spot at the mall last Saturday afternoon. I may be able to convince you that this mischievous, winking "belief" opened a window to some previously unnoticed data hiding in a corner of My preconscious mind. Such as that blue SUV that I saw pulling out of that row thirty seconds before I got the urge to "Turn Here, Right Now!"

So, like Zhuangzi and his butterfly dream, I've turned into a goddess who's trying to talk some sense into mortals who believe in gods. Or something like that. (takes long, long draught of Green Chartreuse as She tries to parse the preceding sentence)
This may elicit a shrug, but for Me this was a big deal. In Real Life, I'm essentially a gregarious loner. I'm the one sitting in the corner of the lunchroom, trying to filter out a conversation about someone's trip to Vegas or Cancún so that I can concentrate on the book I'm reading. My idea of a Hot Night on the Town is to stop off for coffee on the way back from karate class.

Now I have a bona fide reason to get out and socialize: A group that cares as strongly as I do about creating a sustainable, rational, compassionate, equitable, fulfilling and dogma-free future for humanity. I'm also giving some thought to becoming a trained counsellor so that I can act as a [non-]spiritual resource for non-religious patients at the local hospital.
One of the events that set Me on the path of a spiritual seeker was a vision that I had back in the winter of 1968-69. As described in HHBV, at age eleven I realized that no amount of progression into the infinite future or regression into the infinite past would be sufficient to imbue life with "meaning". Not even an omniscient god can gain purpose from such an exercise.

Once the initial existential chill and pre-teen nihilism wore off, I was left with a question: Well, then, what does give life meaning?

The first right answer: "Do interesting stuff." And oh, how I like to do interesting stuff. Music, art, writing, studying something new, racing through the local home improvement centre five minutes before closing time in search of a 13/16" Forstner bit. But there are only so many balls you can juggle before the extra ones descend at 9.8 m/sec2 and bonk you on the head. So that wasn't quite it.

I revisited the question recently, and found the second right answer: "Pay close attention to what's happening in this very moment." Not only is such dedicated attention a simple yet versatile form of meditation; it quiets background chatter in the mind, silencing both unproductive regret and catastrophic anticipation. It also reduces stress, and makes everything in life fascinating just the way it is. In the words of the Greek poet Pindar (552-433 BCE):

"Seek not, my soul, the life of the immortals; but enjoy to the full the resources that are within thy reach."

Or, in My own words:

"...'Meaning' has nothing to do with the reason we do things; it is full engagement in the doing itself, in realtime, in the eternal present. It is the place where 'you' step aside and commit yourself fully to what you are actually doing at that moment, without chattering to yourself about how your action fits into Life, the Universe and Everything."

at Wednesday, February 04, 2009
Email ThisBlogThis!Share to TwitterShare to FacebookShare to Pinterest