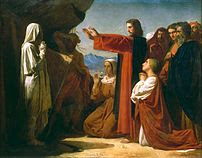 Is Christianity a religion with real power or a fraud? If you listen to fundamentalists they clearly believe that they have “real power” at their fingertips. It’s not hard to understand why they believe this. After his resurrection Jesus stated to his disciples that those who follow him shall perform miracles.

Mark 16:15-20 “And he said unto them, Go ye into all the world, and preach the gospel to every creature. He that believeth and is baptized shall be saved; but he that believeth not shall be damned. And these signs shall follow them that believe; In my name shall they cast out devils; they shall speak with new tongues; They shall take up serpents; and if they drink any deadly thing, it shall not hurt them; they shall lay hands on the sick, and they shall recover. So then after the Lord had spoken unto them, he was received up into heaven, and sat on the right hand of God. And they went forth, and preached everywhere, the Lord working with them, and confirming the word with signs following. Amen.”

So, can you handle serpents? If I give you a glass of poison can you drink it and live? When you lay hands on people that are sick do they recover? When Jesus says “And these signs shall follow them that believe;” he’s talking about everyone that claims to “believe”. There is no “out” clause there. You either perform these miracles or you don’t and he makes the outcome certain for those who can’t.

Let’s go over this again. 1) You have to believe to be saved. 2) Those that believe shall perform these signs: take up serpents, cast out ‘devils’, speak in new tongues, drink poison and live, and lay hands on the sick and they recover. If you can’t do the things listed in #2 then you don’t really believe. If you don’t really believe then “he that believeth not shall be damned”. Jesus wasn’t making a list of what he wished his followers could do. He made a very clear statement as to what “real believers” ARE able to do. “And these signs shall follow them that believe… and if they drink any deadly thing, it shall not hurt them…”. Poison anyone?

Therefore, I have no other choice but to relegate Christianity into a pile with all of the other Pagan myths and superstitions. Don’t like what I’m saying? Want to prove me wrong? Produce me one single Christian willing to drink cyanide and we can settle the argument.

at Friday, February 27, 2009
Email ThisBlogThis!Share to TwitterShare to FacebookShare to Pinterest