The Anatomy Of Christian "Logic" ... Just For Fun 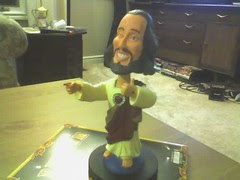 Image by _escalade328s_ via FlickrI admit it: Sometimes I just like to make fun of Christianity and those who keep the faith.

On one hand I honestly do respect a person's right to believe anything they want, and to live/practice whatever pleases them. I just don't respect the way Christianity has been used to rob the masses of their personal sense of freedom and power for centuries; nor do I respect the very real threat to human advancement this dark age religion poses through many aggressive organizations, lobbying groups, and advocacies.

And maybe I'm a little irked by the fact that most of my family and many of my friends are brainwashed to the extent that a really open conversation about the nature of life is an impossibility.

Note To Reader: If Christianity allowed it's members to use their brains in debate this content would be great for dispelling the illusion. Sadly, as we know, Christians have at least two primary fall back arguments they can use when confronted with evil tactics like reason, logic, history, science, and facts.

These primary bailouts are:

Precautions and disclaimers aside, I'd like to share some reflections on what christian logic looks like when we peel it away from the sentience-free environment of a bible study group or Sunday school class. I hope you enjoy reading this as much as I enjoyed writing it. :o)

But we do it with love in our hearts...

I've never seen a grumpy old man chase little kids away from his sidewalk and then claim he did it with "love and charity". Yet Christians are CONSTANTLY boycotting, protesting, and even violently disrupting the operations of bookstores, civic groups, and other business and special interest organizations that fail to comply with Christian theology; in every case that comes to mind it is claimed the actions were taken "with love and goodwill".

Do unto others as you would have them do unto you...

If one were taking this statement at face value, one might assume Christians would leave people to find their own beliefs without interfering. On the contrary Christians, who whine incessantly about persecution and having their faith attacked, seem obsessed with undermining, downplaying, and if possible driving to ruin all competing (or even non-competing!) belief systems.

Justice lies at the heart of the faith, except for when (such as in the central act) justice totally gets thrown out the window in favor of blatant petty vengeance...

I always thought Judas got the short end of the stick. Let's replay quickly:

God decided that since he made us evil in his own image (more on this gem later), he had to subject his son to an agonizing death. For this exact reason Jesus was said to have come to earth as a man.

Fulfilling his role in the greater scheme of things, Judas betrayed Jesus to the Romans/Jewish aristocracy, who crucified him. All this went according to plan because, after all the son of god wasn't going to hang himself for our sins, right?

Even so, Jesus said (paraphrase) it would have been better for Judas to "never have been born". Also in the book of Acts it is written that Judas simply falls over one day with his innards spilling out; it seems divine wrath caught up to him.

And if you're keeping score, it would appear that Judas was struck down, cursed, or whatever for being a helping hand in god's brilliant plan to have his own son whacked so you and I could be forgiven for our sins. Honestly I don't even have a catchy little line for this it's just so damn absurd and blatantly unjust.

Made in the image of god AND born wicked...

Is it red or is it green? I love a good philosophical paradox but I don't think that's what Christianity is going for with the specific teachings that:

God is perfect. God made us in his own image.

We were born evil. We'd best get to begging god to forgive us for our wickedness.

Neatly omitted is any questions as to how this ludicrous scenario can even exist. Yeah I got the memo about Eve eating the fruit and thus cursing all future generations to be born of "original sin" but that would mean she was made flawed... a bad girl in the image of god!

Merciless butchering in the name of the lord - bad when Islam does it but not a problem if the disciples of Christ do it.

Let's all get on page here: Many Christians are pleased as punch that U.S. bombs are currently destroying "radical Islamic groups". Truthfully most of the casualties are non-combatants but that's another article.

Islam is touted as a SEVERE threat. I agree that suicide bombers are incredibly warped people.

However, it's of interest to me that estimated millions of people were slaughtered during the dark ages in the name of Jesus Christ. In addition to the crusades and inquisitions, many deaths were incurred via routine law enforcement operations, i.e. killing the serfs wholesale for evil things like learning numbers or reading Latin.

Right up to the Manifest Destiny debacle the Christian god was used as an excuse to kill, rape, and plunder. To this day no real responsibility has been assumed and no plea for public forgiveness has been issued.

The protestants all blame the catholics. And frankly the Vatican probably isn't sorry about any of these horrid events.

How in blue blazes is it humanly possible to teach your kids that "Jesus loves them" in the wake of all this absolutely rampant and unrepentant bloodshed in the very name of this savior?

So much for serendipity. Here comes Yahweh...

The universe seems to be a place of beauty, and of order.

I'm not a mathematician. But I have seen the beautiful symmetry of numbers.

Elsewhere in the natural world we can find many examples of this rhythmic bliss. However things may have started and however they continue, life seems to emerge and move in patterns, cycles, and other predictable phenomena.

Then suddenly, out of the cosmic bliss steps a figure. I can just make it out...

It's bipedal. Goodness it does seem to be a human form!

And look... testicles. Yes there will be hell to pay - literally - if we forget those divine testicles!

I can see a face now. It's Jewish!

Huh? Wow that was a hateful thing to say.

Talk about self-absorbed and irrational. And what a childish little prick to boot.

This really takes the cake. Christianity would seriously have us believe all the order, rhythm, reason, and wonder that is our universe was manufactured by a spiteful, petty, emotionally thwarted, male Semite who lives in the sky and is really concerned about our sexual habits and whether or not we use four-letter words!

I know this kind of commentary is old hat for you guys. But sometimes it's just good to blow off some steam and I appreciate having a place to do it.

Thanks for reading, and I hope you were at least moderately amused. I'll hustle up something a bit more educational on the next run. ;o)

at Tuesday, December 23, 2008
Email ThisBlogThis!Share to TwitterShare to FacebookShare to Pinterest