Is it Ok to Celebrate Christmas, Even If You’re Not a Christian? 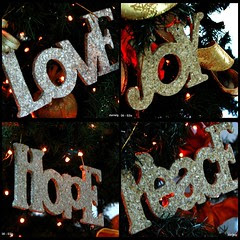 I just love Christmas!” my friend Hannah confessed recently, “even though I’m appalled by Christianity.” She sounded sheepish, as if loving Christmas somehow made her bad.

Poor Hannah. I understand her tone of apology. What Hannah is appalled by isn’t the broad range of kind, thoughtful Christians in her community, but rather the thin cruel theologies that drive the Evangelical Right. People like Bill O’Reilly have claimed Christmas for their own--deriding broader holiday traditions. “It’s about Jesus!” They cry loudly. “Jesus is the reason for the season!” “It’s a Christian holiday (and this is a Christian country)!” Who wants to be associated with O’Reilly and his minions?!

Hannah’s Christmas isn’t about Jesus, and she doesn’t want to lend power to fundamentalists by joining in something they have defined as their celebration. But she needn’t fear. Jesus isn’t the reason for the season.

Puritan leader Oliver Cromwell outlawed the celebration in England, and his prohibition against Christmas was kept by the Puritan colonies in the New World.Yes, December 25 has become the time that Christians express the joy that comes from a sense of unearned forgiveness and unconditional love. It is a time when they relish the community of believers and family, and they look forward to a future when peace and joy will reign on earth “as they do in heaven” and the lion will lie down with the lamb. And for them, this is the very heart of the holiday.

That said, the Catholic Church chose December 25th (Winter Solstice in the Julian Calendar) to honor the birthday of the Christ for a very specific reason: It was already a well loved holiday – a time of revelry, gift giving, and yes, celebrating the birthdays of gods.

Early Christians recognized this: Fourth Century Bishop John Chrysostom wrote: "On this day also the Birthday of Christ was lately fixed at Rome in order that while the heathen were busy with their profane ceremonies, the Christians might perform their sacred rites undisturbed. They call this (December 25th), the Birthday of the Invincible One (Mithras); but who is so invincible as the Lord? They call it the Birthday of the Solar Disk, but Christ is the Sun of Righteousness." (The Fourth Century is our first record of a December Christ-mass celebration.)

Not only did earlier generations of Christians recognize this, some of them were offended by the holiday’s Pagan associations. Puritan leader Oliver Cromwell outlawed the celebration in England, and his prohibition against Christmas was kept by the Puritan colonies in the New World. Even Baptists in times past condemned the holiday, and to this day Jehovah’s witnesses and some other fundamentalists perceive it as contrary to Christian teachings. And not without reason.

Christmas appears to have its roots in two Roman holidays: Saturnalia (December 17-23) and Sol Invictus (December 25) Saturnalia , the feast of the god Saturn, is said to have been the most popular holiday of the Roman calendar. People celebrated with visits to friends and giving gifts, particularly wax candles (cerei), that may have represented the return of light after the solstice. Natalis Sol Invictus (Birthday of the Unconquered Sun) is when the births of solar deities were celebrated including Sol, Attis and the Persian Mithras (who was, incidentally, born of a virgin). At the time of Constantine, the cult of Sol Invictus was the official religion of the Roman Empire. Small wonder, then, that he pronounced the 25th as the birthday of Jesus, center of the new official religion. (Excellent article here.)

The ways we celebrate Christmas reflect the intuitive, creative ways in which all human cultures and religions borrow, blend and adapt. We find what fits and make it our own. It’s why French bread and coffee are part of Vietnamese cuisine. It’s why T-shirts are popular in Kenya. It’s why Egyptian hieroglyphs morphed into a Roman alphabet which then made its way around the planet.

My guess is that virtually everything Hannah loves about Christmas has roots that extend through and beyond the Christian tradition. Here are just a few for fun.

So, I say to my friend Hannah: Love any Christmas tradition that is dear to you, including the ones that originated in Christian cultures and stories. And no more apologies! We all are borrowers, and especially at this time when people around the world celebrate the renewal of warmth, light, and life, we are all the richer for it.

Valerie Tarico is a psychologist in Seattle and founder of www.WisdomCommons.org. Her book, The Dark Side, is available through the ExChristian bookstore.

at Thursday, December 11, 2008
Email ThisBlogThis!Share to TwitterShare to FacebookShare to Pinterest