Jesus vs. Santa Clause -- The Quest for the Historical Jesus, Part 2 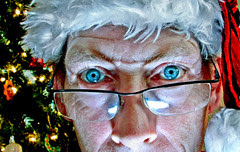 When I did my last post on this subject, I was informed I had started off on the wrong foot. Indeed I did as I approached Christians ministers only and forgot to ask those that post here for sources on whether Jesus existed or not, I apologize.

In the process I was given many sources including one that suggests the historian Josephus may not have existed and was nothing more than a forgery.

The more I researched Jesus, the more I realized just how complicated and and hard this was going to be. I have evidence on both sides and there is a lot of it to go through to the point it is almost too much for me to handle.

Then it hit me! Jesus is the most influential and famous person in history. Proving Jesus existed and who he was and his miracles were real is extremely difficult. Why is this? How can the most powerful, influential person in the history of mankind be so hard to prove? Why can't someone come up with solid non-disputable evidence?

The sources I went to referred me to books they have heard of or sources they have heard of, but it seems they never read these sources. But then I recall being a teenager in church and hearing all of these Christian Urban Legends that all turned out to be mostly untrue. Nobody ever research them, but was more than happy to pass them on as fact. Hmmm...

I was reminded of the four gospels and how they weren't written 50 to 70 years later and passed on verbally until then. Yeah that's a real reliable way to pass information. We all know who well this works. Each time a story is passed on the teller of the story always adds a little to the story or gets a part of it wrong. So how much of the four gospels got change over that time period?

My quest was to prove or disprove the historical Jesus. I was actually able to do that without tons of research after all. The term â€œChristianâ€ means a follower of Christ. This means someone who is a Christian has Christ in them and they follow his teachings.

The challenge was to find evidence either way. I realized that that evidence was right before all of us all this time. HIS FOLLOWERS! They are the best proof you will find. This that follow Christ are supposed to be "kind and loving in all they do" and to "turn the other cheek" when attacked. If they see someone they think needs the LORD they are to reach out and help them.

Recently an individual named Evelyn reached out for help. Someone known as Sunny attacked her straight up and treated her bad. There was no love, no kindness and no reaching out to her. In fact, he was out to turn her other church. There have been others here who have professed to be Christian but acted as Sunny did. Is that the best at being Christian you can do? Apparently it's the best Jesus can do. How sad.

Based on the actions of Christians who have posted here and their comments and attitudes (anything but love) and the actions of most Christians I have met I have come to the following conclusion that Jesus cannot exist or be real. Those that follow him are going off information that is unproven and their actions and how they live compared to what they preach is proof enough Jesus is a lie.

Anyone can do humanitarian work regardless of your religious beliefs. I myself have reached out to friends, family and even people I don't know and I don't go to church. Of course I don't advertise like the Christians do, but then I don't do it for glory, but because it is the right thing to do. Yes a non-Christian can tell the difference between right and wrong.

I still plan to do a little more digging, just for curiosity.

Well ran out of steam.

at Tuesday, December 23, 2008
Email ThisBlogThis!Share to TwitterShare to FacebookShare to Pinterest