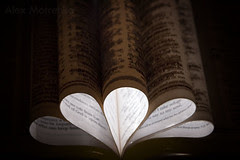 Image by almoko via FlickrOccasionally, the Mormons or JWs will knock on my door and offer their Mormon Bible, the Watchtower, or whatever. I wanted something brief to trade with them, so I put together the following 2-pager.

The Bible as Primitive Nonsense

How could we prove the authors of the Bible were superstitious myth-believers and not skeptical, genuine wise men? We could begin by considering some of the creatures they wrote about in the Bible such as witches, wizards, sorcerers, spirits, ghosts, giants, dragons, sea monsters, satyrs, and unicorns. Modern science can't come up with the slightest trace of evidence that any of these creatures exists or has ever existed. This stuff was just made up.

If someone we don't know says, "Just trust me," shouldn't we be suspicious?Other mythical oddities of the Bible include a talking snake, a talking jackass, a talking bush, 900-year-old men, a man whose super-human strength resided in his hair, three men who walked unharmed through fire, a man who lived three days in the belly of a whale, a wandering star which somehow led to a particular building, and a corpse which stood up and walked away after three days in a tomb. Were these stories just meant as metaphors? If so, wouldn't the Bible authors have made this clear? After all, whenever Jesus spoke in parables, he announced it first.

Clearly, all this stuff was just made up. No half-educated adult living today, who was not indoctrinated in this stuff since childhood, could take it seriously or would consider even for a moment that this stuff is really history. Christians obviously use a double-standard when it comes to judging the Bible as history.

Jesus made up a whole bunch of stuff too. He claimed a true-believer could command a mountain to move and it would move (Matthew 17:20). He can't. Jesus claimed that whatever one asks of him in his name, he will do it (John 14:13). He doesn't. He also said he would return with the Kingdom of Heaven before all of his generation was dead (Mark 9:1). He didn't. That was 2000 years ago. Are you one of those who are still waiting?


The Bible instructs us to just believe without questioning, but how can this be sensible advice if the Muslims and Hindus say exactly the same thing about their "Holy" books?So, why is this stuff in the scriptures since it can be used to prove Jesus was making stuff up? Because Jesus and the authors believed the end of the world was coming very soon -- a message he repeated over and over. Well, the world didn't end and all this embarrassing misinformation is still in the Bible. But many Christians don't actually read the Bible and the others simply choose to ignore it. Often they will say something like, "It;s in the Bible so I believe it." This is simply another way of saying "You're right, this makes no sense at all, but I believe it anyway. I'm just not going to think about it."

But at least the Bible provides sound moral guidance -- right? Wrong! Not once does God or Jesus or anyone in the Bible say a word against the practice of slavery. Some of the other moral "wisdom" of the Bible includes

Doesn't it seem like an awful lot of killing was prescribed? Do you really think this is the best a wise, all-knowing, loving god could come up with? If the Bible is the "Word of God," why does it strike us as so morally repugnant? All this stuff is primitive, brutal nonsense and clearly was just made up. If these commands constitute moral wisdom revealed by God, then shouldn't our laws be based on them? Shouldn't we be searching out witches and killing blasphemers, adulterers and homosexuals?

Note also that none of this "wisdom" of the Bible was ever overruled or superseded by Jesus or anyone else -- or could ever be:

"The grass withers, the flower fades; but the word of our God will stand forever." Isaiah 40:8.

If the Bible is truly the "Word of God," why is there no definite, unambiguous evidence of this fact in the bible? Why are there no scientific facts in the ancient Bible which would have proved it was revelation from God? There is nothing in it that was not generally known by literate men of that age, and there is a great deal of misinformation (Jesus thought disease was caused by evil spirits -- Matthew 8:16). Why wouldn't God have put into it a few startling facts that no normal man of the time could have known -- like the earth goes around the sun, micro-organisms cause disease, nothing can travel faster than the speed of light, etc?

In the face of such ambiguity, each religion has come up with its own "holy books," and each depends on miracles like virgin births and faith healings and such. Why doesn"t God or Jesus provide unambiguous proof to each generation and all over the world? After all, man's arguments over religion have caused the deaths of millions over the ages; how could a god who loves mankind just stand aside and allow this to happen? If the people of Jesus' generation needed miracles to believe, why should we, living 2000 years later, be expected to believe with nothing but ancient, un-testable claims and the words of others to go on?

Yes, the Bible instructs us to just believe without questioning, but how can this be sensible advice if the Muslims and Hindus say exactly the same thing about their "Holy" books? If someone we don't know says, "Just trust me," shouldn't we be suspicious?

As Sam Harris has written,

"Christianity amounts to the claim that we must love and be loved by a God who approves of the scapegoating, torture, and murder of one man -- His son, incidentally -- in compensation for the misbehavior and thought-crimes of all others."

But, of course, this nonsense depends entirely on the "testimony" of the highly superstitious, primitive authors of the Bible. Doesn't it matter to you whether the Bible is true? Don't you care?

at Sunday, November 09, 2008
Email ThisBlogThis!Share to TwitterShare to FacebookShare to Pinterest

Jesus Christ is the son of God who died for all of our sins and his father is God. The only way to God is through the son -Jesus. All of this was creaated by the words of God and with God all things are possible.

Another xtian who missed the site disclaimer and the very first sentence of this webpage:

The ExChristian.Net blog exists for the express purpose of encouraging those who have decided to leave Christianity behind.

All this was created by the words of God.... which therefore includes all of us EX-CHRISTIANS. With god all things are possible, unless we are using iron chariots. In that case, God cant do shit to us. You God said so in his holy book!
Judges 1:19
And the LORD was with Judah; and he drave out the inhabitants of the mountain; but could not drive out the inhabitants of the valley, because they had chariots of iron.

Discordia: "With god all things are possible, unless we are using iron chariots. In that case, God cant do shit to us."

Monica: "Jesus Christ is the son of God who died for all of our sins and his father is God."

Prove it -- Without using the Bible, third-rate pseudo-archeology or your own emotional delusions.

And where the f%ck do you get off, letting someone die for your alleged 'sins'? Grow some gonads and pick up your own mess, lady.

I'm sure that I could write in 100 words or less something that would be more meaningful for the whole of humanity than the bible contains in its entirety!