God is Sick and Perverted 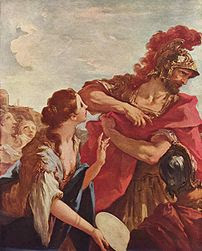 The Return of Jephthah by Giovanni Antonio Pellegrini,By Neal Stone

First off, Christians, don't give me the "That was the God of the Old Testament excuse," because in Heb 13:8 it says "Jesus Christ is the same yesterday and today and forever." and in Malachi 3:6 it says "I the LORD do not change..." So God is never changing, and Jesus is also God in the flesh, so your excuse doesn't work here.

In a recent post we heard a Christian call an atheist television show and engage in a conversation where the Christian went down in flames. A story is mentioned about a guy named Jephthah who sacrifices his daughter after promising God he would sacrifice the first thing to come out of his home, should he when a war.

We are going to look at this passage and break it down. Let us keep in mind the according to Christians and the Bible, God knows the past, present and the FUTURE. So, everything that is about to unfold, God foresaw ahead of time.

Judges 11:29-40 -- our story is found here. So, if some lame ass Christian gives you crap, just give them this reference.

At that time the Spirit of the LORD came upon Jephthah...


OK let's start right here. When the spirit of God comes upon you, that means everything you do, say, etc., is from God and under god's control and influence.

...and he went throughout the land of Gilead and Manasseh, including Mizpah in Gilead, and led an army against the Ammonites. Hmm, killing in the name of God.

Yep, the spirit was on him alright. Are we surprised?

And Jephthah made a vow to the LORD. He said, "If you give me victory over the Ammonites, I will give to the LORD the first thing coming out of my house to greet me when I return in triumph. I will sacrifice it as a burnt offering."


OK, making vows to a deity, BAD! Ignoring the deity and living a decent life, GOOD! Notice how he promised to sacrifice the first thing that came out of his house to greet him. What exactly was he expecting to come out? Makes you wonder doesn't it? When you come back from a war who usually is the first out the door to greet you? FAMILY! Wife, kids, etc. So what was this guy thinking? Why not just promise the best calf or something like that?

So he goes out and wins the war and this passage even says GOD GAVE HIM THE VICTORY!!!! As he walks back to his house what comes out the door first? His daughter!!! God knew this from the very beginning and yet allowed this promise to be made! THIS IS SICK! Plain sick and anyone who denies it is just as sick and perverted and just plain stupid!

But it doesn't stop there. His daughter begs to live two months in the hills so she can cry and say goodbye to her friends. She is even upset she is going to die a virgin. Hell if it was me that would be the first thing I would fix. Well actually the second, the first would be to get the hell out of there and not come back.

When she returned home, her father kept his vow, and she died a virgin. The New International Version (NIV) says,

"After the two months, she returned to her father and he did to her as he had vowed."

She came back! Not only that she allowed her father to kill her! Even she was messed up in the head. I don't know which is sicker, him killing his daughter or her actually coming back and letting him do it. But that's not all. She spent two months with her friends who also knew what was to come. They did nothing!!!!! Most important of all GOD DID NOTHING! God let this promise be made, God filled his end of the bargain so it could follow through, and God let it happen!

I have never read this passage nor heard of it till now. I am sick to my stomach reading it! We grow up hearing the usual Bible stories, Adam and Eve, David and Goliath, Noah's Ark and so on. We are never read these passages in church.

This is that point I have been waiting for. My struggle of believing in God or some deity or becoming an Atheist. I have been on the fence and now stand on the Atheist side. I DO NOT BELIEVE IN GOD!

I am an atheist! I cannot believe in a God this sick, perverted and cruel. There is no justification of this story at all!

I close with the following statement:

I, Neal Stone, hereby deny Jesus Christ as my lord and Savior. I deny the Bible as God's inspired word and deny the existence of God or a god. I hereby completely and forever turn my back on Christianity the the false cruel God they preach. THERE IS NO GOD!

at Sunday, November 16, 2008
Email ThisBlogThis!Share to TwitterShare to FacebookShare to Pinterest