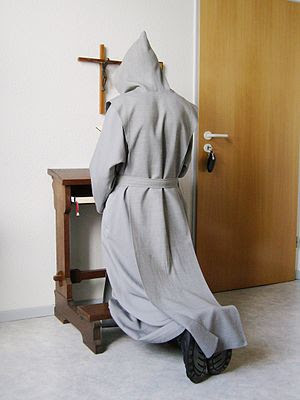 Recently I came across an article in the New Yorker magazine that mentioned an ex-nun who spoke of her convent’s prohibition against “particular friendships.” Since the last time I heard that phrase was nearly sixty years ago, it ignited memories of when I was a Catholic monk. It also brought to mind a comment made to me by a women I met on a singles date. After three hours of talking, she said, “This has been a unique experience.” Here is one of my unique experiences.

Raised in a religious family which taught that one is bad just in being human, I felt I was supposed to swim upstream continually against myself. Where better to do this than in a Trappist monastery – that gung-ho of all religious institutions, that Marine Corps, Taliban, at war with oneself, as per the very instructions of Jesus himself? In this “contemplative” order, one dedicated himself in penance and prayer to “redeem” mankind. (Notice how the world became better in the 1950’s?) No radio, TV, newspapers or magazines were allowed, and no contact with the outside world except for the occasional letters to and from family, and their yearly visit. No talking, just sign language. Hard work, obedience and chastity were the order of the day, every day. (Does this sound like a cult? Read your gospels again.)

It’s no wonder to me that teens are recruited to the priesthood, missionaries, Taliban, religious right movements, Campus Crusade for Christ, Teen Challenge, Buddhist monkdom, etc. That teenage mentality of strict black-and-white, absolute good and evil make them perfect recruits And, oh so easily exploited by trusted “wise” older people. Such blind trust! Making sacrifices for noble causes draws in many if they see them as such, but this can be, and is, hijacked, and can lead to self-delusion in the process (suicide bombing, anyone?). At the age of 14, I entered the monastery.

Time to talk about chastity and sexuality. At the time I entered the monastery, I asked the Abbott for permission to take vows of poverty, chastity, and obedience. He said it would not be formally possible, but to take private ones. Shortly afterwards in the church, alone, I “dedicated myself to Jesus” and then experienced what theologians and other authorities describe as a “spiritual ecstasy,” when a person feels with such intensity a pulling out of the body into a state of beautiful bliss, peaceful serenity, and absolutely wants to remain there. Those same theologians describe this as a “foretaste of heaven.” But, I must insist, it’s all in the head!

The aftermath of this experience brought a lightness and happy, warm, serene feelings, as if nothing could ever trouble me again. But, I must tell you in all honesty, this was not the only time I felt this way; twenty years later I was having intercourse with my then-wife and had the very same ecstasy again. It was never really “spiritual” after all, though I read somewhere that Hinduism regards sexual intercourse as a participation into the divine. Wrong religion to begin with?

Looking back, it was not my intense dedication coupled with an ongoing teenage rebelliousness that ended with me outside the walls. They were forced eventually to either send me off for psychiatric treatments or home. Home it was, and they told my parents, “He didn’t do anything wrong.” It had to be the chastity thing. I’m by nature sensuous, and the scents of incense, lullabies of chant (50 years earlier they hit the pop charts), and light blazing through stained glass windows, wasn’t enough. Touch was missing; gentle caressing and holding. Science has verified that different neurons are activated when someone touches you than when you touch yourself. And, it’s not hard to imagine what “not even touching yourself there” does to a teenage boy.

Last year, monastery memories came back with a petition my wife received from Focus on the Family Action. They were promoting the “abstinence only” program, so I had to write them to say, in essence, “Are you crazy?” First of all, the program, after millions of your tax dollars spent on it, is a colossal failure; my own personal experience is testimony enough that it brings stress, frustration, tensions, and psychological damage. And, if you think about it, why would your creator of such a vast universe with billions of happenings care if a couple in a back bedroom were making out, or if a young lad is frequently masturbating? Religions have the chutzpa to pervert the words “ecstasy” and “rapture” for their own purposes. Those words are sexual. So, rather than think about some intangible, nebulous rapture, we ought to be aware of the real raptures going on in this world all of the time.

Amongst the flow of living, we often find romance, love, plain lust, or a mixture of all of them. If sexuality makes me care for another, cry over pains suffered by or inflicted on others, and thereby a vulnerable person, good! What a contrast to those who suppress it and deny it to others and themselves.

Were nearly five years in two monastic communities wasted? Well, how else would I be able to share and to warn you? It’s written that, “Of all the sad words said by men, the saddest these: It might have been.” Ah, but if only I hadn’t been so shy, if only some kind girl had taken me by the hand and led me into her temptation… But, believe it, I’ve made up for lost time.

At the age of 15, I would have died for Jesus, and now I find evidence to doubt he even existed. How liberating. In a few short months I’ll be 72. If I didn’t have regrets, it would mean I had missed out on some things, but free from religion to be the curious child, I fly, Dumbo feather-free above those chained to dogmas. Meanwhile, the religious keep piling up their crap below me. You can’t build on it. You have to dump it yourself. Once I thought we arrive at that liberty merely through logic and reason, but now I see that our sensuality is just as strongly involved, if not more so. Here’s hoping you share your unique experiences, also. And, by the way, “particular friendships” are same-sex relationships.

at Sunday, September 06, 2009
Email ThisBlogThis!Share to TwitterShare to FacebookShare to Pinterest