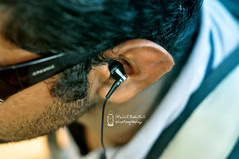 A couple of years back, I dragged my agnostic husband, Brian, to a Calvinist megachurch. Calvinist means God preselected a few humans for salvation and the rest for eternal torture. We sat there for an hour, goats among the sheep. Brian’s reaction? “That was the best indie rock I’ve heard in a long time!”

Christians have a love-hate relationship with popular music. I came of age during a hate phase. Rock was diabolical. In my generation, Alice Cooper, missionary kid, played out his parents’ fears about rock music, chopping up baby dolls and screeching about necrophilia while dressed as a 17th Century witch. Having dabbled on the enemy side of a fantastical spiritual war that supposedly encompasses us all, he now attends an evangelical mega in Scottsdale, Arizona.

Music can be a path out of insularity. In his youth, Alice had to choose between edgy rock and Jesus. By contrast, my nephew (raised by the same woman who raised me on Swan Lake--my mom) spent his teen years consuming a steady diet of Christian heavy metal. Mom’s complaints were focused on aesthetics. Matthew’s beloved “screamers” were distasteful, but not dangerous. Heavy metal had been co-opted. Instead of sketching daggers and bones dripping with stylized blood like secular metal fans, Matt could draw hearts and crosses dripping with stylized blood—and that was ok.

In Christianity, music is cement for faith. It can put people in that otherworldly frame of mind needed for repentance and conversion. It can call people to action and bind them to each other. It can evoke submission or ecstasy. Even the traditional interweaving of music and liturgy transforms passive observers into active worshipers. But it's also thought of as dangerous.

The problem for fundies is that music also can call people into the playful, sexual or political dimensions of social life. Young Christians are enticed to be “unequally yoked” with nonChristian band members, compatriots, or even lovers. At least that’s what a lot of parents and ministers worry about. That’s why in the long run revival movements often co-opt pop music, whether it’s heavy metal or, in past times, the folk tunes or medieval love songs that provided melodies for now-traditional hymns. Some evangelists still try to guard young people from rock or hip hop music. But others work to “melt your face off” with a band that screams about Jesus.

Either way, I think they are right about the risk of secular music. Music can be a path out of insularity. Not by itself, of course. But music creates links to a whole wide world of human activities and ideas. For former fundies, it can also help with the healing process. When you’ve had your child-mind warped by scary songs liked “I Wish We’d all Been Ready” or when you’ve spent Sunday mornings swaying to “I’m a Pentecostal” or you’re dulcet tones were trained on “Saved by the Blood,” it can help to start feeding your brain some alternatives.

During the summer I sent out email to a few friends and online ex-Christians saying I was going to put together a playlist for recovering fundies. Seventy-three song titles came back at me—everything from Gershwin to Nine Inch Nails.

“Just list mine,” she said, as if the solution was perfectly obvious.

So here are the top ten picks of a 14 year old (whose musical tastes, as will be apparent, were shaped by her dad more than her peers).

“Oh, and of course, Imagine.” It goes without saying.

at Thursday, September 17, 2009
Email ThisBlogThis!Share to TwitterShare to FacebookShare to Pinterest