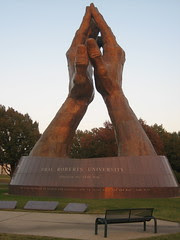 Oral Roberts, the 91 year old founder of Oral Roberts University, now semi-retired, has taken to reminiscing on the Christian TBN network, about how he founded the University that bears his name. His fond remembrances of how "God" revealed to him the "seed faith" theology (a coin he termed), is enough to make any fiscally responsible persons' blood boil !

Oral Roberts founded the 263 acre University campus in 1963 in Tulsa Oklahoma. The current endowment rests at 33 million dollars, off of which Oral Roberts earns $83,505 per year for his retirement. In addition the University Board of Regents used millions of dollars of endowment money in 1988 to purchase property in exclusive Beverly Hills for Oral Roberts West Coast home and office, which also included a country club membership. In addition he also maintained an exclusive residence in the St. Andrews Country Club in Boca Raton Florida (until 1992), which he commuted to by private jet.

Now lets look at how he came by the capital for this privileged lifestyle that not only he has enjoyed but his wife and children, including the heir apparent son Richard Roberts and his family.

Where did the money come from to buy the original property and to build the original buildings of this dynasty? From the "seed faith" theology swindle. It works very simply. Convince people to give you their hard earned money from doing honest work that has earned them a profit. Promise them nothing in return from you. No stock certificates, no interest on their "investment", no dividends, nothing. Instead promise them that this magical thing called "seed faith" will bring them a "30,60 or 100 fold" increase on the amount they give you (and healing, and heaven, and you can add as many "blessings" as your imagination can conjure) because you are not responsible to produce anything for those who buy into this scheme! You do not have to give anything back to them for the use of their money. See they give the money to YOU, and you use it to buy something of actual value - property. Then you promise them, that "God" will pay them back. You get interest free money with no obligations for future payments, and they get "pie in the sky"! This is a swindle.

The Oral Roberts "seed faith swindle" pays no one, except Oral Roberts (and those affiliated with him). The Oral Roberts University endowment does not rely on "seed faith" theology to maintain the campus of ORU. Instead it uses old fashioned investments. You know investing in real businesses that produce actual products and countable profits in the here and now. They dont give away the endowment and trust God to give them "30,60 or 100 fold return" to meet the expenses of running the university (and paying Oral Roberts his retirement income).

When Donald Trump was beginning his rise to success, he did what honest business people do, he borrowed money from investors or banks who expected that he would return said money to them with interest. He then used their investment money to purchase property and materials to construct money producing buildings like hotels. He was then responsible to payback the original investment with interest. Oral Roberts had no such contract with his "investors".

The only reason this swindle can be perpetrated to begin with, and can continue to this day without fear of criminal prosecution, is because those who espouse "seed faith" theology claim it is protected as a First Amendment right, under the auspices of the free exercise of religion. If this were a product being sold claiming to heal every disease AND bring the user a "30,60 or 100" fold increase in their salary, the FDA would halt all such advertisements today! The seller would have to show verifiable scientific proof of said claims to continue their advertising campaign. The "faith" community does not have to provide such proof, and hence can escape any fear of court orders to cease and desist their activities. What a great way to make a living! No wonder it attracts so many from the evangelical subculture who dont have the education or the skills to make a living doing something worthwhile, so instead prey on the unsuspecting with their "seed faith" theology.

The list of those who tout this horribly deceptive teaching is long and infamous. Kenneth Copeland, who used "seed faith" theology to buy his $20 Million dollars in property and assets in addition to a private jet also valued at $20 Million dollars. Joyce Meyers Ministries, $10 Million corporate jet, $2 Million dollar home for herself with additional $2 Million dollars in homes for her children, is expecting to make $95 Million this year from her "ministry", TBN founders Paul and Jan Crouch in 2004 earned a combined total of $764,000 plus 30 ministry owned homes at their disposal including a pair of Newport Beach mansions, a mountain retreat and a ranch in Texas, and of course the ubiquitous $7.2 million dollar turbo jet for their private use. With the cloak of religion tightly clutched around their activities, they are able to continue to collect as much money as they can get the unwary to send them. This money is then used to purchase real investments; properties, businesses, portfolios of stocks and bonds. Those who makes these contributions have to depend on "God" when they lose their job and need help paying the bills, or need medical care, whereas the recipients of "seed faith" money can afford to not only pay their bills, but when they get sick can afford the best medical care available.

This swindle preys on the weak minded and the gullible. It should be illegal. Like all other cons and swindles and ponzi schemes this one should be relentlessly opposed by responsible members of society and halted from hurting the vulnerable.

at Sunday, September 27, 2009
Email ThisBlogThis!Share to TwitterShare to FacebookShare to Pinterest


and it goes on and on...and God even uses these people, yes, He does.. but how much more He could use them if this horrible error were eradicated. Do not hate, but pray for....There is one POWERFUL seed:
the Son of God...the giver of life, now and forever.

Please stop making me laugh. Stop it. Stop it NOW. I am laughing so hard my stomach hurts. Lordy, I've been fiddlin' with the possibility of canceling all my sarcasm and laughter in favor of a more civil approach on this site.

I was pondering an act in three movements: "Mediocre Dr. Phil Meets Fraggle Rock" with lots and lots and lots of jabber about love and Kumbaya pie and bunnies and building community and why not lick Brute Deodorant as myotherapy? A C+ act, to be sure.

I would roll with the vagaries of time and fate and yet….

What do I see when I visit EX-C this lovely evening but your rant concerning a most POWERFUL seed?

Hell, I would respect you more if you barged into our site hollerin’, “LollipopponiescandypornbananasflufferJesus!”

Honestly, if you don't stop, you will end up eating green mangos and blathering on about Hungarian nuns like this guy:

Thanks to you, I shall continue with my featherbrained flights until the Webmaster yanks me off the stage.

PLEASE, PLEASE Never stop with your sarcastic rants! We LOVE them, you are the master of the 'sharpened tongue'!

We love you dearly, and you are still going to be our first invited guest at the 'COME bRIGHT INN'. I hope to have You, WebmDave, Neal Stone, Atheist Tooth Fairy and Valerie Tarico (and of course your spouses and kiddies).


An hour of Comedy with BB and ATF, followed by scintilating conversation with Dr. Val and Neal (and maybe a martini or two), culminating with my speciality..........Prime Rib with Blue Cheese stuffing, smashed red potatos and Yorkshire pudding. After desert of homemade blackberry cobler, a la mode, retiring to the parlor for more jokes and joviality (basically making fun of christians) until we fall into our respective beds and lay our heads on fluffy, down pillows (with dreams of Bertrand Russel and Richard Dawkins dancing in our heads).

"...candypornbananas..."
Now there is something I haven't seen yet.

Oh there is my post! Finally. Guess the god of the blog god is more powerful. ;) Thanks WebDave. Told you it wasn't a bad word and I was being good.

The pastor, and arrogant Spaniard, would gloat in the sacristy before mass about giving his Lincoln and Washington Sermon

That's disgusting....and the real sin (as opposed to the fun kind of sinning I teased about in another post a minute ago).

Who said anything about sinning. I just want to put my ball into the hole!

XPD (I hope my putter stands up straight!)

Oh come on. You take all the fun out of it. lol

That was my minister great uncle's nickname. My grandmother and I always called him Richard though. Others called him Dick.

OK there goes the board again. What did I do to upset the board? It's moderating me again. I'm good. :(

Mriana, I find that one has to bowdlerize one's profanity to evade the clutches of the automatic Naughty Words Filter. I've been kicked into the moderation queue more than once in a fit of pique.

Damn it! I didn't it again and I didn't use a single bad word. I didn't the first time either! Now I'm not happy.

Oh that went through. What does it take around here? Cursing?

Damn it! I didn't it again and I didn't use a single bad word. I didn't the first time either! Now I'm not happy.

Oh that went through. What does it take around here? Cursing?

Sorry for my rather 'risk-ay' comments above. I was responding to Peter and buffetphan. I'm sure Peter didn't find them offensive and buffet....well, we all know she is a dirty ol' grandma (meant in the best possible way BP).

I'm glad you are around to keep me on track. Sometimes I wander off topic, trying to be funny.

If I offended you, I am truly sorry.

Hey, what happened to my photo?? What's going on? The site is wiggin' out!

Ahhhh... The Naughty Word Filter can read . It just can't understand . It's probably worn out from trying to filter through all that xtian gibberish that makes its way into our website. ;-)

This will not end until the gutless IRS investigates, publicises & prosecutes the con-artists who perpetrate these swindles.

These people are indeed despicable. I don’t understand how they sleep at night. Of course, the ultimate “teaching” that makes such swindles so easy is that faith (blind belief) is a virtue and preachers are special. You take all the children who were fed this nonsense for years and years, let them grow up and gather some assets, and it can be relatively easy to divest them of whatever they have. It’s too bad the victims never think to ask why it is that the creator of human intelligence wants blind faith from them.
-WizenedSage