The Bible is not a necessary source of morality 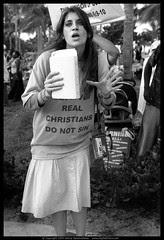 I don't really love arguing with Christians. I consider myself a friendly Atheist, and I don't shove my own beliefs in anyones face unless they do the same to me specifically. However, when I do, I'm usually fairly successful in getting my point across. Whether I "convert" them is not of concern to me, as long as they understand my view.

Near the end of these conversations there always tends to be the last-stand argument that, even if we can't believe in God and The Jeebus, the Bible is still a good thing for human morality, and that it is a good guide on how to live a good life. I used to just let them have this last word, mostly because I did not have an effective counter argument. But I came up with one that has worked well, that I wanted to share with everyone in case they also had trouble with this.

None of what the Bible offers is exclusiveWhat it boils down to is this: morals do not have to come from religion on order to be moral. They can be "good" or "moral" on their own, secular grounds. The best way to get this across to someone that you are having a discussion with is to ask them "Why?".

For example, let's take one of the most basic rules of the Bible. Thou shall not kill. I think that we can all agree that this is moral. But why? Why is it moral? If we take the religious way, we say that it is not moral because God says that it is wrong. But this is circular logic, or perhaps more accurately, dead end logic since we already decided that we could not effectively prove the existence of God. So, then, why is killing wrong?

Because it infringes on basic human rights, of course. We don't kill other people, because we don't want to be killed ourselves. We don't allow killing in society, because it is advantageous to the furtherance of the society to disallow killing, and let people live free from the fear of being killed at random.

This argument is, of course, entirely secular. So, where does the Bible fit into morality? Why is the Bible a good guide for how to live our life?

The answer is simple: it doesn't. It isn't.

You can substitute any piece of "morality" from the Bible in this same way. How about the Golden Rule? Do unto others as they would do unto you?

There is a secular, humanistic explanation for why we should follow nearly any moral law. The Bible holds no monopoly over these ideas.

In fact, one could argue that it is better to not kill because of your own personal beliefs, rather than for the fear of burning in hell to the pleasure of a bearded man in the sky.

In conclusion, when someone says that the Bible is a good way to live ones life, that may or may not be true. However, none of what the Bible offers is exclusive; people can hold to those morals for completely secular reasons, and thus the "morality" argument for why we should believe the word of the Bible is not a valid argument.

at Monday, October 12, 2009
Email ThisBlogThis!Share to TwitterShare to FacebookShare to Pinterest