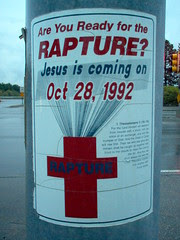 Where do we draw the line between tolerating or attacking someone else's weird ideas?

I ask this because, over the last year or so, I've become bored with the usual whack-a-troll slugfests here at ExChristian.Net. My weapon of choice, the Clue-By-Four™ (a rune-inscribed virtual cudgel, lovingly crafted from the very finest invisible oak), is staying under the desk most of the time as I struggle to actually communicate with evangelically-minded visitors.

I don't have an enormous problem with Universalist Christians, the believers who think that everyone is already saved and that no one is going to Hell. I find their beliefs silly, but mostly harmless.

In a similar vein, I respect the many fine folks whose beliefs inspire them to work in the community, feeding and clothing the destitute among us.

But oh! those pesky trolls.

I simply can't respect someone who comes here to tell us we're evil... So evil, in fact, that their loving god is obligated to torture us for eternity.

Even though their all-powerful buddy "can't be in the presence of sin." (What's up with that, anyway?)

And I can't respect someone who tells us to say the Sinner's Prayer in order to save ourselves from the wrath of their maniacal invisible friend.

I find it ironic that the same people who say "We can't understand God's will" also present themselves as official True Christian™ spokespeople for this poor, misunderstood omnipotent being.

And I never did grok that "innocent god-man died to erase your crimes" business. From where I sit, that doesn't look particularly moral, or desirable, or even possible.

But the Rapture nuts are the very worst of the worst. These are people who are actually looking forward to the end of the world. They are the poster children for mass insanity. Their delusion has the potential to endanger our very lives.

I think I'll hang onto that Clue-By-Four™ a little bit longer.

at Saturday, October 24, 2009
Email ThisBlogThis!Share to TwitterShare to FacebookShare to Pinterest