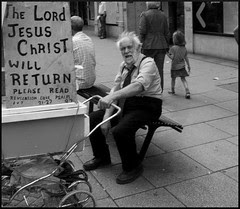 I can hardly wait for Jesus to come back. With the TV cameras rolling, will he come floating down through the clouds the same way he went up? Will he walk across the Sea of Galilee, Lake Michigan, the Pacific Ocean? Will he stop in Africa first, since so many there seem to need miracles the most, as they pray that their children not die from starvation and preventable diseases? Will he cure AIDS and malaria there?

With the TV cameras recording, I would like to watch him feeding thousands from five loaves of bread and two fishes, and watch him walk through a wall, and listen to him praise his spokesmen such as Pope Benedict, Pat Robertson, Ted Haggard, et al., and then listen to him constantly chastise and damn the hypocrisy of religious spokesmen again, as written in those gospels. Maybe he will raise the dead again, making them come out of their graves and walk among us. And maybe he will cure blindness and deafness and drive devils deliberately into the herds of unsuspecting ranchers.

I’m waiting for him to say that the end of the world is at hand, the way that he said it the first time around (I’m sure there’ll be reporters to ask why it didn’t end that first time), and that the meek will inherit the earth.

Maybe after all these centuries he will at last explain those “mysteries” he asked us to believe on his word - those centuries of persecutions, tortures, and killings because of those words.

With the TV cameras rolling, will he come floating down through the clouds the same way he went up?Perhaps he will still be as rigid and intolerant as ever, so that someone will try to assassinate him. But, you can’t kill him because he’s not all human and not all ghost. And, everything would be on camera, with the videos played over and over, like everything else these days, via satellite, for all the world to see. Come, Jesus! (What took you so long?)

Of course, there is the possibility that neither he nor his father ever existed. After all, there wasn’t any way of video recording then, and none of the historians of his time mentioned him either. One cannot imagine anyone feeding nine thousand plus people with ten loaves of bread and four fishes and not being written about that very day; nor a single diary mention of dead people coming out of their graves and walking about on the day of the crucifixion.

So maybe, after two thousand years of Christian history, Jesus can’t come back because he was never here to begin with. And, if he did, he’d have a lot of ‘splaining to do, cause what was written about Judas might just apply to him: It would have been better if he had not been born, in any form.

Ah, but it looks like it could be a very long wait for him to come around. I’m going out for an ice cream sundae. Care to join me?

at Thursday, October 08, 2009
Email ThisBlogThis!Share to TwitterShare to FacebookShare to Pinterest