A Life of Blasphemy or, My Thoughts on International Blasphephemy Day 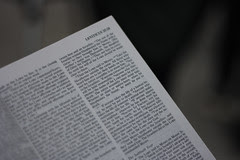 NOTE: This is a Facebook note that I wrote yesterday; it has received a great response and I thought I'd share it here.

Tomorrow, September 30, 2009, is International Blasphemy Day. The date was chosen to mark the four-year anniversary of the Muslim "Danish cartoon riots." Rather than merely fire off another one of my pithy Facebook status updates (although I reserve the right to do this as well), I thought I'd write down a few of my thoughts on the event itself and my own feelings on it.

From the official site: "International Blasphemy Day is not just a day. It is a movement to dismantle the wall which exists between religion and criticism."

My guess is that almost anyone reading this note knows something of my background: raised Evangelical Christian, went through a protracted and very painful period of deconversion from late 2003 to mid-2005. I've long maintained the line touted by such "new atheist" luminaries as Richard Dawkins and Christopher Hitchens that religion should be subject to criticism. In all honesty, I've wrestled with formulating my own position on this: how to be candid and honest about one's opinions while still maintaining cordial and amicable relations with friends and family members who are of faith. And yes, at times I was rather leery of the "new atheist" movement.

Today, however, I am a proud "new" atheist. Having come to my views through no small struggle I hold that freethought and religious skepticism is precious. It is a blood-bought treasure of Western civilization. Consider this: at the time of the American Revolution, Maryland had an anti-blasphemy statute. If you spoke blasphemy against the Holy Trinity three times (the magic number, three) and were of sound mind, the sentence was death without benefit of clergy. And that's just the tip of the iceberg.

The bloody history of the suppression of religious dissent is well-known and needs little elaborating, but here we go anyway:

The Medieval Inquisition was instituted in the early 13th century (if memory serves) by Pope Innocent III for the purpose of persecuting "heretics." The focus was southern Europe, where trade across the Mediterranean had engendered the rise of the Cathari in southern France (also known as the Albigensians). The heinous Albigensian Crusade down the Rhone and into northern Italy was the result.

The European Witch Craze began in the late 15th century and raged throughout the sixteenth, mostly in northern Europe--especially the "Holy" Roman Empire (modern-day Germany) and Scotland. Around the same time that the Spanish Inquisition revived the bloodshed and madness in Spain (and then Portugal, and it spread from both places--even to Goa and Malabar with the Portuguese). The Salem Witch Trials of 1692 came at the very tail end of the appalling affront to human dignity. The vast majority of the victims of the Witch Craze were women. The Inquisition in Spain targeted Jews and conversos, derisively known as "Marranos" (pigs)--Jews who had converted to Catholicism to escape persecution. Spain's remnant Muslim population was also not exempt. The Portuguese targeted Jews in Portugal and "heretic" Christians of the Syrian Church in India.

These are only two particularly notorious historic examples. Today, Ireland has a blasphemy law, as does Afghanistan--proof positive that the medieval streak runs deep in both Catholicism and Islam alike.

But hang on, friends, because we haven't even got to the meat of the argument yet. And for that, we must consider the source: the sacra, the canonical texts of the religions themselves. For purposes of brevity and salience I will confine my remarks to Christianity, as I am less familiar with Islam's sacra for obvious reasons (never having been a Muslim).

You see, the barbaric and medieval notion currently enshrined in the jurisprudence of the Republic of Ireland has its source solidly in the Bible itself. I am referring, of course, to the Unpardonable Sin. In the words attributed to Christ:

28 “Assuredly, I say to you, all sins will be forgiven the sons of men, and whatever blasphemies they may utter; 29 but he who blasphemes against the Holy Spirit never has forgiveness, but is subject to eternal condemnation”— 30 because they said, “He has an unclean spirit.”
~Mark 3:28-30, NKJV.

10 “And anyone who speaks a word against the Son of Man, it will be forgiven him; but to him who blasphemes against the Holy Spirit, it will not be forgiven.
~Luke 12:10, NKJV.

Whether you accept this definition or take the passages in question at slightly more face value and maintain that this means a verbal denunciation of the Holy Spirit, the mentality that this doctrine engenders and its ramifications are very clear and, for me as a skeptic, extremely noxious. Whatever interpretation you adopt, you are still left with an explicit doctrine of the sacred that precludes criticism--or at the very least, criticism beyond a certain point. In other words, these passages are the heart and soul of the anti-dissent doctrine in Christianity.

However I would submit to you, dear readers, that even discarding these passages--supposing for a moment that they were never written, or were found to be apocryphal in some way--that the problem remains. And the problem goes deeper than Christianity, to encompass certainly all of the three major monotheistic religions. The reason is simple: in Christopher Hitchens's words, all of these religions enshrine a doctrine of god as Celestial Dictator, a kind of Divine Big Brother who monitors your every thought, word and deed--and finds you wanting. He can and does convict you of "thought-crime"--at least in Christianity. In Judaism and in Islam he demands a series of ritual observances and practices--certainly far more than in most Christian denominations.

Hitchens goes so far as to liken at least the Christian god to North Korea's Kim Il-Sung, the "Great Leader," and his son Kim Jong-il, the "Dear Leader": both of which have been deified through Kim Il-Sung's elaborate personality cult. North Korea, like the Abrahamic religions, extensively monitors the actions and deeds (they're not quite up to the level of sophisticated thought-surveillance, to be fair, but watch out) of its citizens. Dissenters are silenced. There are slave-labor camps for not only dissenters but FAMILIES of dissenters and escapees. Indeed, the parallels are positively chilling.

And what is the ultimate fate of dissenters and blasphemers? While in North Korea the government has absolute power over its citizenry only in life, the god of the Bible and the Qu'ran has no such limitations. The Qu'ran speaks of the "fire whose fuel is men and stones." I'm rather more familiar with the Bible's stance:

28 And do not fear those who kill the body but cannot kill the soul. But rather fear Him who is able to destroy both soul and body in hell.

[In the words of John of Patmos]:

15 And anyone not found written in the Book of Life was cast into the lake of fire.

8 But the cowardly, unbelieving,[a] abominable, murderers, sexually immoral, sorcerers, idolaters, and all liars shall have their part in the lake which burns with fire and brimstone, which is the second death.”

There you have it: by failing to accept the gift of salvation offered by the meek-and-mild savior, those of us who do not believe merit eternal perdition. So much for a loving god. The first conclusion that I draw from this is that it is religious morality that is fundamentally immoral, not atheistic morality. Secondly, dear readers, I propose that under this system those of us who do not believe are ALREADY COMMITTING BLASPHEMY. There is NOTHING that we can say, do, write or depict tomorrow or any other day which can further compound the blasphemy of our very lives of unbelief under such a system.

I am all for an International Blasphemy Day. But we must use it as a reminder of the true scope and scale of blasphemy. We must remember that blasphemy does not solely consist of pithy and humorous slogans and witticisms, of provocative pictures and images. There is no need to state "I deny the Holy Spirit" when our very LIVES are lived in denial of the EXISTENCE of the same!

So tomorrow, if you wake up in a time and place in history where you have the freedom to criticize the prevalent religion in your society if you so choose--be very thankful and be very humble. I don't care if you're a theist, atheist or whatever--free speech is precious. Dissent is precious.

And happy International Blasphemy Day, to believers and unbelievers alike! Remember, even if you ARE a believer, you're not exempt--there will always be other believers of other sects and religions who find you a heretic or unbeliever in your own right.

at Thursday, October 01, 2009
Email ThisBlogThis!Share to TwitterShare to FacebookShare to Pinterest