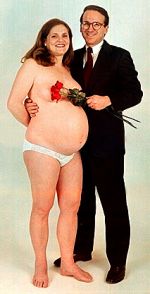 One of the common arguments lodged against same-sex marriage is the following: "but they can't have children."

This argument is an obvious non sequitur- many different-sex married couples cannot, or choose not to have children, so should their marriages be considered any less valid?

Well, according to the Washington Defense of Marriage Alliance, they should be.

This group, which was formed in response to the Washington State Supreme Court decision to uphold its ban on same-sex marriages, has just filed Initiative 957, which if passed, will:


According to Gregory Gadow, the organizer of the WA-DOMA:

For many years, social conservatives have claimed that marriage exists solely for the purpose of procreation... The time has come for these conservatives to be dosed with their own medicine. If same-sex couples should be barred from marriage because they can not have children together, it follows that all couples who cannot or will not have children together should equally be barred from marriage.

The guy's logic is solid, and I can't help but admire the way in which he's really reflected his opponents' words to give clarity to the issue, but come on- the enactment of this initiative won't do anything more to help same-sex couples fulfill their values, and it's just going to infringe on the values of more people. In the struggle to realize freedom for all people regardless of orientation, proposals like Initiative 957 may be funny, but any serious effort directed on its part is immoral.

at Wednesday, March 07, 2007
Email ThisBlogThis!Share to TwitterShare to FacebookShare to Pinterest

I am a straight man who's dumb enough to think that all people should have the same rights to find happiness. I find happiness in members of the opposite sex but if two men or two women feel some spark that will lead to lifelong joy, more power to them. Also they should enjoy all of the legal benefits that I do. I love your iniative 957. I don't hold out much hope, but I would love to see it passed. Passed or not it will make a point with except for those who need it most. The only people that I think are threatening the traditional definition of marriage are those who physically, mentally, or emotionally abuse their spouses. The religious should attack that problem. Good luck. George Metcalf

I think the idea is to push the issue to breaking point.

If 957 does get passed the ridiculousness of the whole issue should suddenly become very stark, then the backlash would hopefully be so huge that there'd be enough momentum to swing things all the way in the opposite direction.

Anyway, marriage itself is what's unnatural.

I'm as gay as they come--PROUDLY so! What I despise are our nations Christians in any attempt to lesgislate LAW from a church pew! Our country was NOT founded on Christian morals, nor is it justice to slam Christian morals on an ever-increasing athesist public! Morality is not defined by Christian belief. Ethics certainly are not---if they were, the entire Republican Party (Christians very own Voting Block) would be jailed. So, Christians, get the hell out of my bedroom, my livingroom, my driveway, my bank account, and stay the F*&^ away from my voting booth!

If one wants the answers to all the questions Christians pose about homosexuals, all one needs to do is look directly back into the Christian community. It's filled with self-oppresed & self-loathing homosexuals fullfilling Jesus's destiny to hide in a closet for the sake of Aunt Sue or Grandma Jones. Nevermind having a life of one's own---a gay man must satisfy the lives of others. I say, PISS on Christians, because they have pissed on gays in the name of JESUS for centuries. I'll NEVER hide in a closet, nor will I take the bullshit sitting down they spout---and hopefully, just hopefully, one day the rest of the heterosexual community will awaken from their deep sleep and stand up against these Christian wack jobs which are robbing them of their civil rights, joys, and security. I mean, in Georgia you can't even purchase a beer on Sunday, nor wine, nor any alcoholic beverage. Why, because Sadie Fields & other Christian Coalition fuck-ups RULE the Georiga Assembly in the name of JESUS. What would Jesus Do? Well, in Georgia he wouldn't allow you to drink, nor accept a vaccine which would cure Cervical Cancer, nor purchase any type of sexual aid, and his list goes on and on and on! If Jesus is as they say, a combination of his followers souls,---why love his cruel behavior---Hell in Georgia, I don't even like him?

Stevie P. makes some great points. We, meaning everyone, are at the mercy of religious bigots in almost every state. Here in SC we can't buy alcohol on Sunday either. However, if I want a beer bad enough, I can go to a local PRIVATE club and buy one, if I am a member. Why, because of religious bigots who run the show. This is 2007 for christ sake, let's move out of the stone age. Anyone, anywhere should be able to purchase beer or wine on Sunday. The Jews must be really pissed at these laws because the Sabbath is Saturday anyway. No problem buying alcohol on the real sabbath. Go figure.

i like this bill. it is so stupid that it should wake up the morons who THINK they oppose gay marriage.
typical scenario of Christians shooting themselfs in the foot again, when some of the happy go lucky, walking the path of jesus christian woman finds out that she cant have children and her marriage is anulled. Seems like more than just gay people will be injured, and i can forsee the continued oppression of womens rights also with this bill

The whole point of this initiative is to get neo-cons to either put up or shut up. If they want to dance around the fact that their actual motivation is keeping true to "GOD!", let's give 'em a hot foot, and see how they rationalize NOT allowing this addendum through.

George, whats all this "rights" stuff.

Since you maintain there is no creator from whom our rights come, they come from society.

So bellyache all you want, but you are an impotent whiner.

Zachary
Did you pull this story from "The Onion" or something like it?

No, this is legitimate news. In fact, I've seen it several times already in the last month or so.

The point that apparently a lot of people miss, is that these folks don't actually want people in childless relationships to be unable to marry: they want to utterly destroy the ridiculous notion that marriage-is-for-producing-children is a legitimate excuse for banning same-sex marriages.

Their end-goal isn't to prevent marriages without children: actually passing this initiative would not please them. What they want is to have the Washington court system be consistent in its treatment of marriage. If the state Supreme Court claims that they ban homosexual marriages because of children, they should apply this same "standard" to heterosexual marriages.

Allow me to correct your flimsy attempt at rational thought. When we look to society for rights and freedoms, we will have neither. Our rights--our right to be free--must be taken from society, not given by it.

Do you think that your deity grants our rights? Is that a joke? I know the bible better than most xristians, and there is nothing in that book that has the faintest thing to do with freedom. The xristian hates freedom--they didn't canonize philemon for nothing.

And you,sir, are a pompous windbag. I would bet you are impotent.

I am a Christian who believes homosexuality is a "sin" However I don't understand why marriage should be kept from them. I also believe greed is a "sin" but I wouldn't attempt to ban greedy people form getting married.

Steve P for what it is worth I support your desire to be proudly gay and I feel you should have the right to marry whomever you choose as long as they are a consenting adult.

evan: I am a Christian who believes homosexuality is a "sin" However I don't understand why marriage should be kept from them. I also believe greed is a "sin" but I wouldn't attempt to ban greedy people form getting married.

Wow...leniency. That's very noble. So Evan, according to you, someone who is clearly an abomination in your God's eyes should be able to enjoy all the same rights that common heterosexual civilians enjoy, whether they're bible-believing Christians, or not.

Coming from a "Christian", that's very interesting, seeing as how back in Jesus' time you could stone people for such "sins".....or hell, for that matter, even people who worked on Sundays. And in case you didn't know---this is according to your Holy book..i.e.."God's Word". BTW, I'm attempting to lead you away from the Lord your God this very second, so technically, you could stone me to death, too.(Deut)

Question: What is it, then? What's keeping you from tracking down homosexuals, non-believers, and people who work on the Sabbath, and stoning them to death? Are you saying that "God's Word" isn't intrinsically "right", and that it's "wrong" to bludgeon people to death with stones for such offenses? Evan?....are you circumventing Jesus' commands/desires? If so, aren't you in effect saying that "God's Word" isn't an objective, universal, unchanging "Truth"?

I await your answer.

I believe that the gospels teach us how Jesus correctly interpreted How to love God and how to love one's neighbor.

Evan: I believe that the gospels teach us how Jesus correctly interpreted How to love God and how to love one's neighbor.

Evan?...why on EARTH does "Jesus" need to "interpret" anything?.. let alone, how to "love God", since Jesus is God, according to your theology.

And you didn't answer my question, unless you're implying that God's laws regarding "sin" in the OT are null and void. If this is the case, then again I ask: If you know that stoning people to death is "wrong"...HOW do you know it? It seems that either Evan, or "God", has thrown out the Old Testament, in which case, you've thrown out the "Commandments" right along with it. God's "Word" has clearly "changed", Evan.

It is difficult for me to tell if you are truly wanting to dialogue about our different worldviews, or if you just enjoy pointing out holes in the christian faith.

Either way I wish to remind you my original post was meant to encourage Stevie P. I honestly hurt for him and I do not think it is fair that he does not have some basic civil rights that I do.

Nonetheless, you seem to be asking two questions.

1. Why don't I follow the ot, especially the ones regarding capital punishment.

2. Since I obviously don't follow them how can I rationalize either the inconsistacies between the ol and nt or my disobediance.

Is that the essence of what you are asking?

That's messed up. Good thing I don't live in Washington - I have been married for 2 1/2 years and don't have kids (nor do I intend to have any at this point). It would cause an uproar in a bad way if it passed - you can't force a couple to have kids just because they are married; it is a highly personal choice!

The last time I checked, most people's primary reason for getting married is because they are IN LOVE, not because they want to secure the father/mother of their future children.