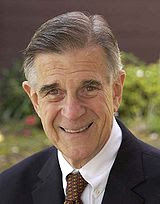 Last year, the Secular Coalition for America offered a $1000 prize to identify the highest-ranked nontheist politician in America. Their catch: Congressman Pete Stark.

According to the SCA press release:

There is only one member of Congress who is on record as not holding a god-belief.

Rep. Pete Stark (D-Calif.), a member of Congress since 1973, acknowledged his nontheism in response to an inquiry by the Secular Coalition for America (www.secular.org). Rep. Stark is a senior member of the powerful House Ways and Means Committee and is Chair of the Health Subcommittee.

Although the Constitution prohibits religious tests for public office, the Coalition?s research reveals that Rep. Stark is the first open nontheist in the history of the Congress. Recent polls show that Americans without a god-belief are, as a group, more distrusted than any other minority in America. Surveys show that the majority of Americans would not vote for an atheist for president even if he or she were the most qualified for the office.

Herb Silverman, president of the Secular Coalition for America, attributes these attitudes to the demonization of people who don't believe in God. "The truth is," says Silverman, "the vast majority of us follow the Golden Rule and are as likely to be good citizens, just like Rep. Stark with over 30 years of exemplary public service. The only way to counter the prejudice against nontheists is for more people to publicly identify as nontheists. Rep. Stark shows remarkable courage in being the first member of Congress to do so."

In October, 2006 the Secular Coalition for America, a national lobby representing the interests of atheists, humanists, freethinkers, and other nontheists, announced a contest. At the time, few if any elected officials, even at the lowest level, would self-identify as a nontheist. So the Coalition offered $1,000 to the person who could identify the highest level atheist, agnostic, humanist or any other kind of nontheist currently holding elected public office in the United States.

In addition to Rep. Stark only three other elected officials agreed to do so: Terry S. Doran, president of the School Board in Berkeley, Calif.; Nancy Glista on the School Committee in Franklin, Maine; and Michael Cerone, a Town Meeting Member from Arlington, Mass.

This would at least seem to contradict the idea that nontheists can't get elected to public office, although it may be the case that this public "outing" by the SCA jeapordizes his political future.
at Monday, March 12, 2007
Email ThisBlogThis!Share to TwitterShare to FacebookShare to Pinterest

I am not familiar with Congressman Stark's congressional record, but after reading this, I'm very interested to follow up and look into this brave individual further.

I wonder how much of this man's distinguished accomplishments, thus far, stick in the craws of the right, whose constant derision of non-theists has its basis in the idea that we are "bereft of values, morals and the ability to think about the overall good of society."

This evidence flies in the face of that derision. I would hope, however, that Congressman Stark understands that the eyes of a great deal of salivating theists in government are just waiting for that one mistake. he is merely human, so it may happen. If and when it does, prepare for the barrage of "I-told-ya-so's" spreading through the hallowed halls of government faster than a chapel full of biddies judging the wardrobe of a fellow congregationist at Sunday services.

Congessman Stark is a BRAVE man, considering the tenor of our country at this point in its history. To speak of his non-belief, in an era of such apparent despera-tion concerning mankind's ability to forge his OWN way through the future, is visionary, in my opinion. We should ALL come out of the closet and make our voices known. He can be a catalyst. I won't "deify" him, but I will point to him often and proudly. It's a small, but significant, step.

Yes, Rep Stark will face some really stupid baseless attacks. All the more reason for secularists to write or call him voicing support. You might consider donating to his election fund also. More notable people will come out if they see there is visible support and encouragement.

Activism works. Apathy does not. If you agree that we owe Rep Stark a huge debt, please pay up now.

I looked but didn't find the esteemed state senator to the Nebraska unicameral from Omaha.
Ernie Chambers is also among the ranks, and has been for many years.