Bibles in Afghanistan: A Tribute to the Power of Belief 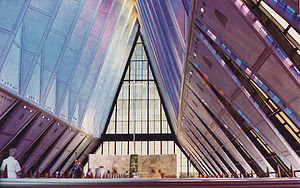 Evangelism in the halls of the Pentagon. Personalized Bible studies for foreign diplomats. Passion of the Christ advertisers next to plates in the Air Force Academy mess hall. Officers Christian Fellowship buses from military bases to revival meetings. A Southern Baptist fundamentalist at the head of the Chaplain Corps.

Through Christian Embassy and similar organizations, millions of dollars annually are dedicated to insuring that our military leadership is steeped in born-again Christianity. The investment has paid off. Mikey Weinstein at the Military Religious Freedom Foundation receives letters daily from service men and women who have been coerced or intimidated because they aren’t born again. Ironically, most of those who complain are Christians – just not the right kind.

You can’t have this kind of conversion activity going on inside the military without it spilling over to the outside. One missionary boasts that he sent 1.3 million tracts to Iraq. Claiming to be humanitarian aid workers, others go bearing Bibles and video tapes or coins with Bible verses for Iraqi children. But much of the public didn’t get the pattern until Al Jazeera this week ran footage of soldiers unwrapping Bibles in Afghanistan and a chaplain urging them to “hunt people” for Christ.

From a moral standpoint, the behavior of missionary soldiers is akin to missionaries who pretend to be aid workers. Soldiers handing out tracts or Bibles are violating an explicit military rule while deceptive aid workers violate an implicit ethical rule, but the reason those rules exist is the same—to prevent harm. How much effort and tax money has gone into convincing the Arab world that our presence among them is not a religious crusade? How much lethal hatred have our soldiers absorbed because Muslims believe that it is?

Even when conversion activities don’t cause soldiers to get physically hurt or genuine aid workers to be driven off, they do cause harm. A conversion agenda undermines the slow painstaking work of laying down trust, the foundation material that lets us bridge our cultural and religious differences and see our shared humanity.

So why would soldiers put their fellows at risk? Why would those who seek to serve the God of Truth lie about their objectives? Why can we count on these problems continuing? Because evangelical Christianity is about evangelizing. Evangelicals believe that they have a moral mandate to win converts, one that trumps other moral priorities.

Don’t get too superior. The fact is, we all weigh moral priorities against each other constantly, violating some in the service of others. Constantly. The problem isn’t that evangelicals are doing this. The problem is what they believe.

From its beginnings, Christianity has been a proselytizing religion, one that seeks to convert others to orthodoxy, meaning right belief. The writer of Mark didn’t say, “If you’re finding this way of life rich and full you might want to share it with a friend.” No, he said, “Go ye into all the world and preach the gospel to every creature, baptizing them in the name of the father, the son, and the Holy Ghost.” (Mk 16:15) Christians call this the Great Commission, and it appears in various forms in our Bible. “Follow me, and I will make you fishers of men.” (Matthew 4:19) Some religions are about tending the gods. Some are about living well or attaining insight. Traditional Christianity is about believing well and attaining salvation and persuading others to do the same. Believe in the Lord Jesus Christ, and you shall be saved – from eternal torture.

When the Asian Tsunami happened a few years back, a local mega-church suggested how members could respond. (I’m paraphrasing): 1. Pray for the people who were affected. 2. Give to Mars Hill Church. 3. Give to our Church building missions in India. From the outside it is appalling that an institution would seek to divert the compassionate impulse into conversion activities or filling their own coffers. But if you genuinely believe, as they do, that belief is the toggle that sends people to heaven or hell for eternity, what higher good could there be?

I get frustrated sometimes with well-intentioned tripe about respecting all beliefs, as if , in order to respect each other as human beings we must subjugate reason and evidence to the higher priority of making nice. Beliefs matter. They shape behavior, and when they are powerful enough, they control it. If you walk in my front door and I believe that you are in my house to kill my daughter, that belief dictates my every move. If my husband believes I am wrong, he has a moral imperative to argue me down. And fast.

True believers of all stripes take belief too seriously. They mistake the feeling of certainty for external reality, and they underestimate the vast human capacity to err. But I think that many of the rest of us don’t take belief seriously enough. We think beliefs can somehow exist in isolation from social and personal priorities. We talk about people setting aside their religion in the voting booth, as if they could or should pull their deepest values on and off like a sweatshirt.

Does everybody have the right to believe whatever they want? Yes.

But that doesn’t mean we must give religious belief a free pass. We don’t have to treat “I just know” as if it meant something about anything other than the speaker’s mental state. Nor should belief be treated as a valid excuse for bad behavior, the way that intoxication used to be. Harm done in the names of gods is still harm. A chaplain or soldier who doesn’t understand this doesn’t belong on the government payroll.

Organizations like the Military Religious Freedom Foundation and Americans United are fighting to re-establish the legal separation between church and state, but some religious beliefs obligate practitioners not to honor this separation. The only solution I can see is to address the beliefs themselves – to stop exempting them from the normal rules of discourse. Any beliefs that insert themselves into the public square must be subject to rigorous public scrutiny and debate. We owe it to ourselves and each other to take belief more seriously.

Valerie Tarico is a psychologist and writer in Seattle, Washington. She is the author of The Dark Side: How Evangelical Teachings Corrupt Love and Truth, and the founder of www.WisdomCommons.org

at Saturday, May 09, 2009
Email ThisBlogThis!Share to TwitterShare to FacebookShare to Pinterest