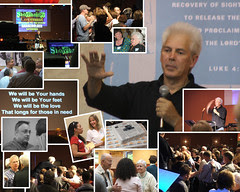 I still receive emailed prayer requests from the last church I attended, often asking for prayers for healing of someone who has a serious illness, or cancer, or been in an accident. I just received one this week, and it got me to reminiscing about how we used to pray for, and over, people who were ill, or who needed "deliverance" from a problem or a spirit of some kind.

The most vivid memory concerned the founder and pastor of a local Charismatic church/fellowship that was located in a small town on the south coast of England, just 6 miles from I used to live. It was one of the largest and liveliest congregations in that part of England. As is typical of charismatic gatherings, there was much talk of speaking in tongues, and miracles and healings of all kinds. We had several friends who attended there, although my family and I attended our local charismatic Baptist church (don't be shocked, Americans, it happens a lot in England!) that tended to be a little less "up front" about the tongues and healings.

This pastor, after many weeks of a lingering cough, was told by a doctor that he had cancer, and it would most likely be terminal. Of course, the pastor and congregation regarded this as a perfect opportunity to show non-believers the healing power of God, as shown in the lives of people who had faith in their saviour and healer Jesus Christ. I think they thought it would be a fairly quick and dramatic healing. Keep in mind that, in their theology, the only reason that a person is not healed of disease is because of their lack of faith. This is the normal teaching of "health, wealth & prosperity" or "name-it-and-claim-it" churches. (In a less charismatic theology, a lack of healing is explained simply as God must have something else he needs to teach the person).

As you may have guessed by now, the healing didn't happen. He made a sign and wore it around his neck, that said: "I AM HEALED". In other words, he was claiming by faith the healing that had as of then, not revealed itself in his body. I actually saw photos of him wearing this sign. As he got weaker and weaker, it seemed the congregation got a little desperate, as they realized that they would look pretty foolish to the community if their pastor actually died. Which is exactly what happened. The congregation, subsequent to his death, did split into factions that blamed each other for lack of faith, or neutralizing the faith that was there. Some people moved away from the area, embarrassed by what had happened.

Here in Portland a few years back, there was a similar prominent pastor of a Foursquare congregation (casually Charismatic) who contracted cancer and died, after much claiming of healing on his behalf. And there was a local couple in Oregon City taken to court by the county, after their child died after an illness which could have been quickly cleared up with an injection of antibiotics. They refused medical treatment because they (and the congregation strongly taught this) believed that God should heal a person, not medical personnel.

It is amazing how irrational people can act, by taking the accounts in the New Testament (healings by Jesus, Paul bitten by a poisonous snake, the raising of Jairus' daughter, etc) and transpose them to the present day. Of course after studying how the NT came together, I have my doubts that most of these events actually took place. But even given that they could have happened, I really doubt that Jesus (and I know many of you don't believe he existed) intended his followers to make a doctrine out of them. And the emotional anguish this foolishness leaves in it's wake is heartbreaking. To see individuals and families devastated because they blame themselves for not having enough faith is incredibly cruel. But hucksters like Benny Hinn, Paul Crouch and the TBN crowd are getting richer every day because there are millions in America who continue to believe and support this lie.

at Saturday, May 30, 2009
Email ThisBlogThis!Share to TwitterShare to FacebookShare to Pinterest