Christian Belief as a Natural Phenomenon: A Six-Part Series
Part 1: Why Cognitive Science is essential to understanding Christianity. 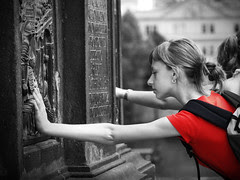 My father died in a climbing accident when he was 59 and I was in my mid twenties. In one of our last deep conversations before his 300 meter misstep, he expressed his abiding hope that I would “get right with God.” Dad was the son of Italian immigrants, all Catholics, who got converted by door-to-door Pentecostals some years after their arrival in Chicago. His mother lived out her life in the Assemblies of God denomination that had recruited them all, while Dad settled into a closely allied form of Evangelical fundamentalism without the speaking-in-tongues bit. As far as I know, he never questioned his belief that the Bible was the literally perfect word of God and that Jesus died for his sins. And yet of his six children three of us, by Evangelical standards, are now slated for eternal torture. We are on the wrong side of a battle being waged on a spiritual plane, a battle in which those who are not on the side of God are agents of evil. If Dad were alive, our lack of belief would grieve him.

Just as biological organisms have many different adaptive or reproductive strategies, so religions compete for human mind-share in different ways. An emphasis on propagating belief (i.e., evangelism) and purity of belief (i.e., orthodoxy) is only one of those. Religious belief is one of the most powerful forces in our world. Believers think that it has the power to save us all. Increasingly, doubters fear that the opposite may be true: a tribal mindset, unaccountable to ordinary standards of reason and evidence but armed with state of the art weapons may hasten our extinction. In the United States, religious affiliation is the best predictor of political party alliance. Almost half of Americans insist that humans were created in their present form sometime within the last 7000 years because the Bible says so. In the Middle East, Sunnis and Shia split over theological differences that seem trivial to the rest of us but that in their minds create tribal boundaries worthy of lethal conflict.

Why is religious belief so wide-spread and powerful? The traditional Christian answer is: because it’s true, and people who haven’t hardened their hearts against God recognize this when God’s plan of salvation is presented to them.

But the recent explosion of knowledge in cognitive science offers a new way to look at this question, not from a moral or theological standpoint but from a practical standpoint. What is the mental machinery that lets us form beliefs? What does evidence and reason have to do with it? How is it that six devoted Christian kids can turn into three devoted Christian adults and three agnostics?

The more we learn about the hardware and operating systems of the human brain--the more we understand about human information processing--the more we glean bits of insight into the religious mind.

This article is the first in a series of six. Each takes a look some part of our mental machinery, how it relates to our tendency toward religious belief. The articles will focus on the following questions:

Before looking at these questions, it is helpful to understand why belief is so important in Christianity. For traditional Christians, belief is the heart of the Christian religion. It is the toggle that sends people to heaven or hell. In the final analysis, believing that Jesus Christ died as a “propitiation” for your sins is the thing that matters to God. No matter how kind and loving your life may be, no matter that you strive to love your neighbor as yourself, no matter what great things you may accomplish in the service of humanity or the world at large – if you believe wrong you are doomed.

This focus on belief is not characteristic of all religions. In the Ancient Near East, the birthplace of Christianity, pagan religions placed little emphasis on belief. The existence of a supernatural world was broadly assumed because there seemed to be little other way to explain the good and bad things that happen to people or natural events like storms, earthquakes, illness, birth and death. But the point of religion wasn’t belief; it was to take care of the gods so that they would take care of you and your community. The word “cult” (Latin cultus, literally care) is related to the word “cultivation.” We talk now about cultivating ground so that it will bear fruit. Nonprofits talk about “cultivating donors.” That was what the gods cared about, and so it was the heart of religious practice.

From the beginning, Christianity was different. Jesus worshipers cared tremendously about right belief, also known as orthodoxy. Bart Ehrman’s book, Lost Christianities: The Battles for Scripture and the Faiths We Never Knew

, offers a fascinating window into the struggles that went on during the first and second centuries as groups with different beliefs about Jesus criticized and competed with each other, and one of them won out. Some of groups (e.g. Ebionites) believed that Jesus was a fully human Jewish messiah and that Jesus worshipers must follow the law. Others (e.g. Marcionites) believed that Jesus was a being from the spirit world who only took on human likeness. Still others (Gnostics) believed that the human Jesus was inhabited by a divine “Eon” during the years of his ministry—revealing to his followers secret knowledge that would let them escape this corrupt mortal plane. Others, now known as proto-orthodox or Roman, had ideas about Jesus that lead to the views of Christians today. (“Roman Catholic” means Roman universal.) What all of these groups agreed on was that it was tremendously important to believe the right thing about who Jesus was and what Christianity should be.

Why is religious belief so wide-spread and powerful? The traditional Christian answer is: because it’s true, and people who haven’t hardened their hearts against God recognize this when God’s plan of salvation is presented to them. This emphasis on right belief was and is unique to monotheism. It existed in a rudimentary form in Judaism, but even today Judaism is more concerned with living right than believing right. Christianity’s exclusive truth claims and emphasis on right belief helped it to out-compete other religions in the Roman Empire. Polytheists often are quite agreeable to adding another god to their pantheon. Christians could persuade pagans to add the Jesus-god and then could wean them off of the others. Today, in India, for example, Evangelical missionaries are much more likely to target Hindus than Sikhs or Muslims who would have to immediately abandon their primary religion in order to embrace the idea of Jesus as a god.

Eastern religions don’t share Christianity’s concern with belief. The emphasis is more on practice or “praxis” –spiritual living, self-renunciation, insight or enlightenment-- and among ordinary people, a sort of cult or caretaking of the gods like that practiced by ancient pagans. Right belief isn’t what lets you move up through cycles of reincarnation or attain nirvana. Nor is it what gets you the favor of gods.

Just as biological organisms have many different adaptive or reproductive strategies, so religions compete for human mind-share in different ways. An emphasis on propagating belief (i.e., evangelism) and purity of belief (i.e., orthodoxy) is only one of those.

In the late 19th and early 20th Century, a movement called modernism emerged within Christianity. Modernist theologians began reexamining traditional orthodox beliefs in light of what we now know about linguistics, archeology, psychiatry, biology, and human history. In this light, traditional Christian certainties looked less certain, and many modernist Christians are more like members of Eastern Religions in that their primary concern is with spiritual practice rather than belief. But a backlash emerged in response to modernism. People who proudly called themselves “fundamentalists” insisted that no-one was a real Christian who didn’t hold the traditional beliefs. Evangelicals inherited the fundamentalist torch, and even some of the more inquiring denominations have reverted back toward emphasis on right belief.

Essential Reading: Bart Ehrman, Lost Christianities: The Battles for Scripture and the Faiths We Never Knew

If you don't want to miss any of this series, subscribe to Valerie Tarico at this blog or send email to valerietarico at hotmail.com and request to be added to the mailing list for weekly articles.

at Tuesday, May 19, 2009
Email ThisBlogThis!Share to TwitterShare to FacebookShare to Pinterest