Churches have too much money 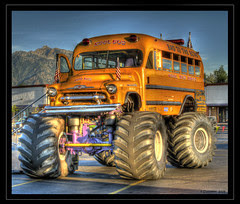 Last Sunday I was out biking and was cutting through the local college campus (St Martin's U. in Lacey) when I came across an old car show. I rode around taking pictures and then left through the front entrance of the college. As I was leaving, I saw off in the distance an old school bus that had been converted to a Monster Bus, like the monster trucks we see on TV. It was the short bus too, like the one special-ed kids ride in. I used to be one of those kids myself, years ago.

I finally got to the bus and was checking it out thinking, “This is so cool!” to myself. Then I saw it. Something that made my heart sink and my blood boil. On the sides were the words “Living Water” with a logo of a church with the same name. But before I got too mad, I thought I would ask a few questions first. There was a gentleman there, so I asked if he built the bus? He said yes. So I started to ask a few questions and found that not only did the bus belong to the church, but the church FUNDED the building of the bus!

Now, I watch monster truck shows and I know that those trucks are not cheap. You can buy a nice home for a the price of a basic monster truck. So, you know this bus had to cost a lot.

So why would this piss me off? Maybe because the cost of such a venture can easily go into multiple hundreds of thousands of dollars. He mentioned that the bus was for reaching “street kids.” Really? I have no problem with helping street kids, but the money put into this bus could have done so much for those kids: food, housing, clothes... you name it. But no, lets build a big fancy monster bus and show it off at car shows. Lets take all that donated money our members gave to helping the needy, the poor, the lonely, and lets dump it into a multi-million dollar church with million dollar budget and sound systems worth thousands.

If this bus had been donated to the church free of charge then I would have been OK. But to see a church dump money into something that they really could do without, just so they can prove how "hip" and "now" they are... But then, churches do like to mimic the world with their music, dress and look.

When a church has to dress up their message to attract people, then something is wrong. When you have to bribe me to go to church, then what you have must not be worth it. Only new and poorly designed products need fancy advertising. A really good product sells itself.

Here I am living with a tight budget looking for some place where I can make a difference and do some humanitarian work, and I see something like this church that just blows money on whatever. The churches just have way too much money to spend.

Here we are in the middle of a real recession where people are losing their jobs, homes and are being tossed to the street as their homes are foreclosed. Where do you think some of these street kids come from?

Have you ever tried to get help from a church? You have to jump through hoops just to prove you deserve their help. At least my family has. I wonder how many needy members the church has? How many could have been helped?

"Times are hard for a lot of people, but that's OK, 'cause we got this cool bus! Praise God!"

at Thursday, May 21, 2009
Email ThisBlogThis!Share to TwitterShare to FacebookShare to Pinterest