Imagining the merits of an Ex-Christian Bible 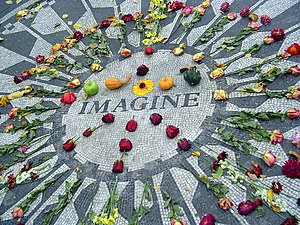 I believe an unofficial anthem for many who frequent ex-christian.net is John Lennon’s song, “Imagine.” Certainly, it is the theme song of the weekly broadcast of the Freedom from Religion Foundation on Air America.

Lennon’s goal in this classic musical piece was that the world would somehow join together in unity. I see in “Imagine” an implication that along with no heaven, no hell, and no religion, there would be no Bible in the traditional Christian, Muslim or Judaic sense.

In other words there would be no myths and no commandments. If all religions were to suddenly go away overnight along with their sacred writings, would that not actually leave a void in humanity? What would there be to unite human beings together? What ideas could human beings draw upon to capture the collective imagination, inspire us to be better people and provide solace for us in times of inner conflict?

The thought of an “ex-christian” bible or a “secular bible” has been on my mind. Not as an authoritative book for dogma. I am thinking more in terms of an exercise in discovering what books, stories and treatises we have out there that a large number of people could draw upon. What material might provide us all with a common basis for building lives, making laws and relating to each other as human beings? What could we put together in the form of a manual that has a breadth of coverage, a depth of subject matter and a simplicity for wide accessibility?

At least one person posted such a Secular Bible. I’m sure there are others out there. What I would like to solicit from members of the ex-christian.net community is ideas for the content of such a collection. It does not have to necessarily be a book. It could be in some other format. What stories, essays, and other literary works out there could be put into the collection? What topics should be covered in such a work that most sacred writings don’t provide? What would you call the thing.

Let me provide you with ideas that have been going through my mind:

Possible Names:
I really would prefer to avoid the word Bible. But, for good or ill, the word “bible” conveys a meaning that can serve to be concise yet actually void of its connotation of sacredness. You ever heard of the Excel 2007 Bible or Boston’s Gun Bible?

Possible objectives:
Some group or foundation could review the publication or release every 10-15 years and release a revised or “rebooted” version. Quality, conciseness and clarity would be the goal with hopes of achieving a sense of completeness about achieving “the good life” from a non-theistic worldview.

I would think, the size should be somewhere between that of the Protestant New Testament and the entire Protestant Bible in size. If some other form of media is used, no single segment should be longer than an hour in length.

Ecclesiastical, governmental, political or corporate authority would not be the basis for compiling such a book. A “book’s” inspirational value, literary excellence and ability to be profound, yet accessible to a wide audience would be paramount criteria for selecting works to be included. The collection would need to have an internal authority that comes from its ability to inform, inspire and promote dialog.

So what about it, Ex-Christian community? What would you suggest for an “Ex-Christian Bible?”

What I’m asking you to do is to dream along with John Lennon with me. What might we put in a collection of works to help us live as one? If there could be a secular book to help us share the world, what would be in it? Is the song “Imagine” worthy enough to include in such a book?

I eagerly await your insights.

at Thursday, July 30, 2009
Email ThisBlogThis!Share to TwitterShare to FacebookShare to Pinterest