Mourning for the living 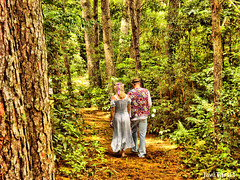 I recently returned from deep in the Bible Belt, having attended a nephew's wedding. ( one atheist amongst 300 fundamentalists ! ) My brother and sister-in-law, and my nieces and nephews are the only members of our family who live in the "Deep South."

Prior to moving there, my brother and sister-in-law ( known from now on as Ellie ) were bona fide hippies.

After the hippie era they became " back to the land people", organic farming, etc., but they still kept their hippie ( love everyone ) philosophies. Then the worst thing that can happen to any family, happened. Almost over-night they were indoctrinated into ultra conservative fundamentalism.

My relationship with Ellie changed completely. For many years I felt like I was attending a funeral that never ends. She and I had even had a deeper friendship than my brother and I had had ( due to the fact that my brother was always on the "indifferent" side ). I felt like she had died, and in essence, she has.

A few years back I had a health crisis that for the first time in my life, propelled me to seek "god." I became a Christian. This , of course, was such good news to my brother and Ellie ! They welcomed me with open arms, suddenly I was one of them ( joining in with the delusion ).

After a while, I began to be very resentful of the entire situation.

HOW DARE THEY, I thought, use a belief in god as a requirement, as a measuring stick of how much love and respect they will dole out to me !
My value as a person increased a thousand-fold IN THEIR EYES, once I was a believer !

My journey to atheism was actually very quick. Many things contributed to it, but I give the most credit to good old common sense.

I am the only atheist in my family, with my children and their spouses, and grandchildren, and husband, all being at varying degrees of Christianity. If I came out to one, I'd be coming out to all, so I continue my academy award winning performance as a " Christian ".

There are two very important issues that drive this. The first, is that the son-in-law who is the biblical " ruler-of-the-roost ", would limit my access to my grandchildren. I have NO doubt about this.

My second reason, is that I want my fundie relatives to be there with love and support for my children & grandchildren when I die. I don't think there would be much comforting and support if it were found out that I was a HEATHEN ! ( guilt by association, you see )

In regards to my brother and Ellie, well I've given this a lot of thought since I became a non-believer. If I had ever tried to explain to them where I am, and how I've gotten there, it would be akin to talking to an iron door... and then that iron door would slam shut.

I would really appreciate hearing the experiences, etc. from my friends at ExChristian.Net, and others too, in regards to their feelings about "losing" friends or family to fundamentalism.

at Monday, July 20, 2009
Email ThisBlogThis!Share to TwitterShare to FacebookShare to Pinterest