The Little Christian Who Cried Wolf 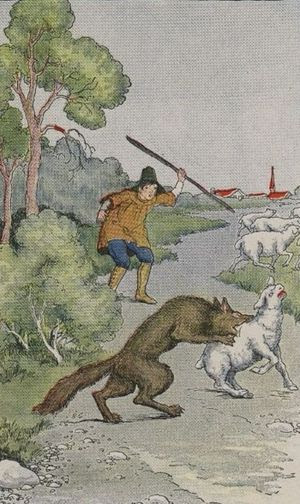 You've probably have heard the term “Crying Wolf” before. Here is the origin of that term. It is an old Aesop fable. One of my favorites.

“A bored Shepard boy who entertained himself by calling out “Wolf!". Nearby villagers who came to his rescue found that the alarms were false and that they had wasted their time. When the boy was actually confronted by a wolf, the villagers did not believe his cries for help and the wolf ate the flock.”

I have met Christians who have claimed how things will change or we are going to make changes and then swing back to the old ways. I have also met some who always proclaim some prophecy only to have it not come true over and over.

I one had a room-mate who was always bragging about himself around the church regarding his supposedly high IQ, or he would come across some new way to change your life, he being right and you being wrong. If you disagreed with him (which he couldn't handle) he'd accuse you of being judgmental. Sound like any Christians you know?

My step-dad was king of the “Cry Wolf “ crowd. The pastor would preach some sermon against TV and boom... the TV would get unplugged, but eventually we would have it back again. Or even worse, the pastor would preach some convicting sermon and my step-dad would come home and say there were going to be changes and would look straight at me. Funny how he never felt the need to make changes to himself, but was ready to make the rest of us make changes.

Then I had Christians friends (when I was in church) who would do something to really hurt my feelings, then apologize and promise to change only to go back to the old ways. This is one reason I attach rules to friendship, you hold me back and tare me down, you get let go.

Then there were the endless promises of how things were gonna change in the church and get better. Or maybe if i prayed more, read my Buybull more and gave more to the church, I would be healed, or find that right job or some oterh open ended promise.

How many times do we have to hear Jesus is coming back and the signs of the times are upon us. Most of the signs are just cold calling. Come one, war and rumors of wars! When was that NOT an issue? Earthquakes are increasing in number and intensity. Really? Not according the US Geological Survey which states there have been consistent in number in the past century AND earthquakes 7.0 and above are DECREASING in number. Even now my parents are still preaching that Jesus is coming and the time is soon.

So many times have I heard Christians and Christian leaders proclaim some prophecy or promise from God only to have nothing happen. Christians are the kings of promises. Whether from god or from them about how things will change/get better and so on.

Just have faith. Believe in God. He will answer. Only God knows. God works in strange...WOLF, WOLF!!!!

I get so tired of hearing it all, Jesus coming, God is working somewhere in someone's life, if you just pray/read/serve God will answer your prayer/work in your life.

After 23 years of this, I have had enough. I am so glad I turned away from it all years ago. If you have read my past posts you will know how much better my life is as a result.

My life is now built on logic and evidence based living. Today my life IS changed and things ARE better! Why? Because I stopped crying wolf and stopped listening to those wh still cry wolf. I made a decision to get rid of silly religious garbage and clean up my life for the better.

Today I am a better person and the wolf is dead!

at Saturday, July 04, 2009
Email ThisBlogThis!Share to TwitterShare to FacebookShare to Pinterest