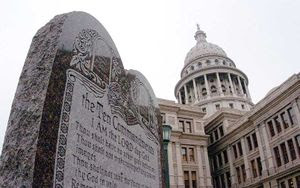 Most Christians in America agree that THE TEN COMMANDMENTS are the pinnacle of morality and think they should be displayed or read at every opportunity. If we all obeyed or valued them, our country would be moral and crime free! At least this is what they seem to saying. But do they realize there are two other sets of THE TEN COMMANDMENTS they ignore ? One version differs considerably with their preferred set, and is found in Exodus 34:14-28. Another version is in Deuteronomy 5:6-21 and is similar to the Christians' top ten choice from Exodus 20:2-17.

This discrepancy is only the beginning of their problem. How can purely religious commands (1-4) cause us to be morally good? The first four commandments are about a relationship between the Christian and god. It has nothing to do with relationships between humans, i.e. morality.

The sabbath (#4), is not kept by Christians. They keep the Lord's Day. To say the command was changed, directly implies that the rest are also subject to change or irrelevance! Additionally, god admits he is jealous, and will punish children due to the sins of their fathers to the third and fourth generation (#2)! Now that's quite a grudge, and a fine example for the Christian to emulate.

Commandment 10 makes our thoughts and desires a crime worthy of eternal damnation. To want what our neighbors have is the American way, so many Christians are guilty of this. But morality is how we treat one another-not what we feel or think. The other five commandments are good advice (#5,7,9) and basic to morality (#6,8), but nothing that hasn't be said before by non-Christians.

So what is so special and compelling about THE TEN COMMANDMENTS? Many believe Christ summed them up: Love your neighbor as yourself. Love does no harm to its neighbor. But how is love related to THE TEN COMMANDMENTS? Love is a positive, life-affirming feeling towards someone we value. We can't love people we are not intimate with. Not harming another person is not love, so what else can we say? The link between love and the commandments is nonexistent. There is nothing special about them, especially when Christians don't practice most of them.

Forgive them, lord. For they know not what they do...or believe...or what the bible really says!

at Monday, July 20, 2009
Email ThisBlogThis!Share to TwitterShare to FacebookShare to Pinterest